The Meaning of Colours in Bangkok 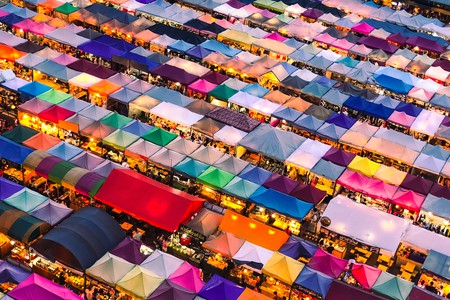 Many colours in Thailand have specific meanings | © lisheng chang / Unsplash

Colour is loaded with significance in Thailand. While the roots of this significance are often ancient, it makes the modern nation tick.

It is seen as the most important day of a young Thai man’s life, and for Panit Pimroon, conscription day was no different. He entered the government building at the designated time and joined a queue of other nervous 21-year-olds to learn his fate. Would it be a red or black card?

“When I was waiting to take the army lottery, I could feel how scared everybody was,” says Pimroon. “One guy next to me even fainted as we were waiting.”

The conscription lottery takes place each April. If they draw a red card, young men must undergo mandatory enlistment and serve two years in the military. A black card means exemption. For a young person in modern Thailand, cards of certain colours can dictate the trajectory of your life.

Buddhism stretches the concept of colour with meaning back long before the borders of Thailand were formed. Wherever you go in Bangkok, you’re likely to see Buddhist monks dressed in immaculate robes in colours ranging from dark yellow to brick red, but more often than not closer to orange.

Ask different monks, and you will likely get different answers as to why the colour was chosen. “From the beginning, Buddha only allowed monks to use cloth from the graveyards that people had wrapped around tombs,” explains Phramaha Somphop, a monk based at Wat Pathum Wanaram, of the connected circle of life and death central to the faith. “The monks took the material and used gasaya (cleomaceae) fruit to dye the robes, which is how they now have their colour.”

Another monk describes how it was linked to a time when the monks lived in the forest. He believes that the vibrant hue helped ward off animal attacks. Yet another monk likens his robes to a flame, with the colour orange representing the eternal light.

The shifting symbolism of colour

Decades ago, Thai people would regularly dress according to the day’s lucky colour (a habit thought to be connected to the region’s traditional animist beliefs). On a Friday, wearing a light blue item of clothing was considered lucky, while dark blue or black was seen as unlucky.

Dressing according to the day of the week is rare these days. Over time, the meaning of certain colours has changed, so it’s now only in scenarios where symbolism matters that people play with the meaningfulness of colour. Red is particularly contradictory. It signifies conscription for some, but for the sizeable chunk of the population of Chinese heritage, red represents luck. And its significance as a colour of national pride is also instilled from an early age.

“We’re taught a song in school about the meaning of the colours in the Thai flag,” says Pook Kruaysiriwong, a young tech professional living in central Bangkok. The song is ‘Day Long Tong Shai’ or ‘The Three-Colour Victory Flag’. The red in the Thai flag represents the nation, one of the three pillars of Thai identity. The other two are religion (white) and the monarchy (blue). Yet, supporters of the Thai monarchy have donned yellow, not blue, in support of the king in various protests over the past decade. Why? This is where the meanings of certain colours in modern Thailand have become increasingly intriguing, and very confusing.

It is no coincidence, for example, that the colour red was co-opted in mid-2006 by a pro-government protest group, known as the UDD, who campaigned against military interference in political elections. They believed that they were standing up for the nation, hence the red. Simultaneously, red was seen as positive for the military when it comes to gaining conscripts, and by a military who also believed they were defending the nation. Red is popular across the board.

The prime minister at the time, Thaksin Shinawatra, who was supported by the red-shirted UDD, was facing down pressures from the People’s Alliance for Democracy (PAD). The PAD was a cobbled-together group of conservatives, nationalists and royalists who all dressed in yellow shirts – not blue for the monarchy – because King Bhumibol was born on a Monday, and the lucky colour on Monday is yellow. And the unlucky colour for a Monday, you ask? Red.

More simply put, the more conservative PAD were adhering to the traditional animist colour system that predates the nation, while the pro-government UDD were using the symbology of the more modern banner of nationalism: the flag.

On 19 September 2006, the military ousted Shinawatra from power. For his red-shirted supporters, this coup demonstrated that democracy in Thailand was a fiction. By 2008, the streets of Bangkok were regularly flooded with red- or yellow-shirted protesters.

Seeing the ensuing clashes, King Bhumibol, who was extremely popular on both sides, strove to remain neutral throughout, despite the unrest. He avoided wearing yellow, preferring to wear pink (lucky on a Tuesday, unlucky on a Wednesday) instead. “After that, all of the PAD supporters started wearing pink as well for a while,” says Pimroon.

During the past few decades, colour and its symbolism in Thailand has undergone great flux. For young men like Pimroon, who are hoping to avoid conscription, however, a colour can still seem absolute, defining the course of your life.

As Pimroon stood there in that conscription lottery queue, where one of his peers had just fainted, he made a choice. “I didn’t want a colour to determine my future, so I decided there and then to volunteer to join the army. That way I’d at least have control,” he says. For others, the red would come to denote military service to the nation. Meanwhile, the black would indicate freedom – or, somewhat confusingly, Saturday.

For the rest of the country, what’s clear is that many Thais still strongly believe in the meaning behind colours – it’s just that what those meanings are has become increasingly open to interpretation.