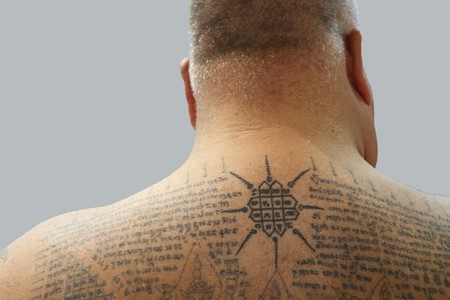 Some tattoos have a deep, meaningful significance; others are done simply on a whim. But there are some too that are truly special — even magic. Once belonging to warriors and now adorned by backpackers and celebrities alike, Sak Yant tattoos have an honourable history that deserves respect and understanding. Here’s a look at their history, their rules and those who have them. 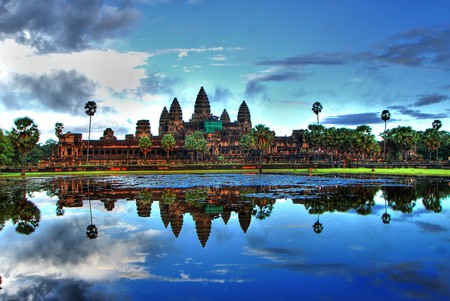 Tattoos have existed in one form or another for many years, in various cultures around the world. When it comes to Sak Yant tattoos, there’s evidence of their use in the Khmer Empire (modern-day Cambodia) dating back to the 9th century, giving them a long and proud history. While the tattoos might look cool or edgy, receiving a Sak Yant tattoo was done for reasons other than those of vanity. With their supposed magical powers, warriors heading into battle frequently had them, as they were said to protect them from harm — with some believing that wearing such tattoos would even prevent arrows or blades from piercing their skin. Whilst the veracity of such claims may be called into question, the Khmer Empire, with its Sak-Yant wearing warriors, went on to rule over Southeast Asia for more than 600 years — perhaps they were onto something. Designs are wide ranging, with each type offering different powers or effects, and all tattoos are tapped into the skin with a sharp bamboo stick and a needle. The five lines of Hah Taew is a popular design, with each line of the Khmer script providing a different effect such as protection from harm or bad luck to increasing attraction from the opposite sex. The tiger design provides strength, protection and authority, making it a popular choice among Muay Thai fighters.

However, merely receiving the tattoos isn’t enough to ensure you’re covered by their magic powers; once inked, you must stick to a strict set of rules, or the tattoos will lose all their powers.

Sticking to the Rules 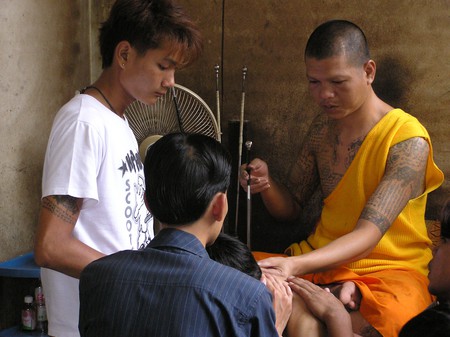 While there are strict rules to follow after receiving a Sak Yant tattoo, there’s some confusion about which rules must and must not be followed. Not only can these rules differ from tattoo to tattoo, but often from temple to temple where they’re received, too. The basic rules follow traditional teachings from Buddhism, such as don’t lie, kill or steal, but some rules go a step further and are more particular, such as not being able to eat any gourd-type vegetables or leftovers and forbidding you from ducking under a banana tree or getting intoxicated. While the last rule may render the majority of tourists’ Sak Yant tattoos powerless within a day, the rules make more sense when you consider the fact that these rules are primarily aimed at Buddhist monks, who believe receiving a Sak Yant tattoo is an important spiritual event. 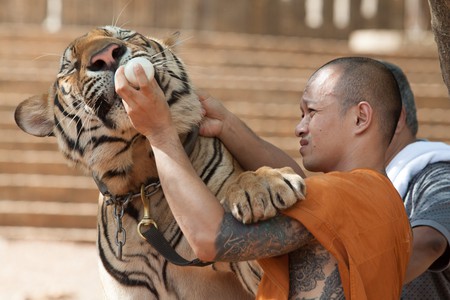 Many monks have tattoos | © Roger Howard/Flickr

For those who break the rules, it’s possible to recharge the powers in their tattoos. While this can be done at any time with a visit to an appropriate monk, there’s one day and one place that’s more popular than any other for those looking for a magical top-up: Wai Khru day at Wat Bang Phra. Located just over an hour from Bangkok, Wat Bang Phra is the most famous place in Thailand to receive a Sak Yant tattoo, and Wai Khru day sees thousands of devoted Buddhist Sak Yant wearers receiving a recharge on their tattoos and paying respect to the monks and tattoo masters. It’s quite the sight; thousands join the monks in chanting their incantations, while many are possessed by those whose tattoos they’re wearing, such as the monkey-god Hanuman, tigers and crocodiles. Once possessed, their behaviour becomes erratic and unpredictable, before being calmed down by having their ears rubbed. 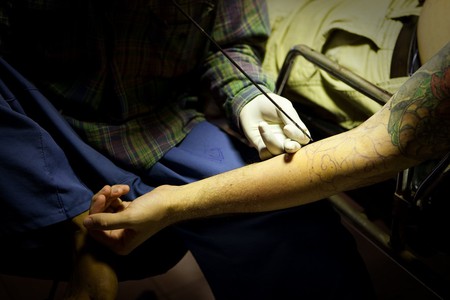 While the tattoos may be a deeply-ingrained part of Thai and Southeast-Asian culture that few truly understand, that hasn’t stopped many people who come to Thailand’s shores from receiving a Sak Yant tattoo, with a handful of celebrities among the more famous recipients. Both Angelina Jolie and Brad Pitt have received Sak Yant tattoos, with Jolie making several trips over the years to receive multiple tattoos from the same tattooist, Ajarn Noo Kanpai. Brangelina aren’t alone in their body-marking endeavours; Ajarn Noo Kanpai has also given Sak Yant tattoos to British actress Cara Delevingne, former FIFA World Cup-winning captain Fabio Cannavaro and Thai celebrity Chompoo Araya, making this artist the go-to guy among celebrities for this type of tattoo. While some tourists have emulated celebrities in receiving proper Sak Yant tattoos with the appropriate blessings from a monk, many instead receive them from normal tattoo parlours, where they receive the Sak Yant designs without the magic powers they’re known for.