The Best Spots for Photography Lovers in Bangkok

Explore the flower market | © palawat744 / Shutterstock
Photography is an art form, and there is no better subject to shoot than Thailand’s capital city, Bangkok. From shimmering temples to prehistoric-looking lizards, here are the best spots for photography lovers in Bangkok.

Wat Maha Pruettharam Worawihan is less frequented than most of the temples found around the capital, but it provides those with a knack for photography some of the best shots in town. In addition to the temple’s glistening features and intricately designed interior, one of the best views of the towering MahaNakhon can be seen from between two large, shimmering structures towards the back of Wat Maha Pruettharam Worawihan. 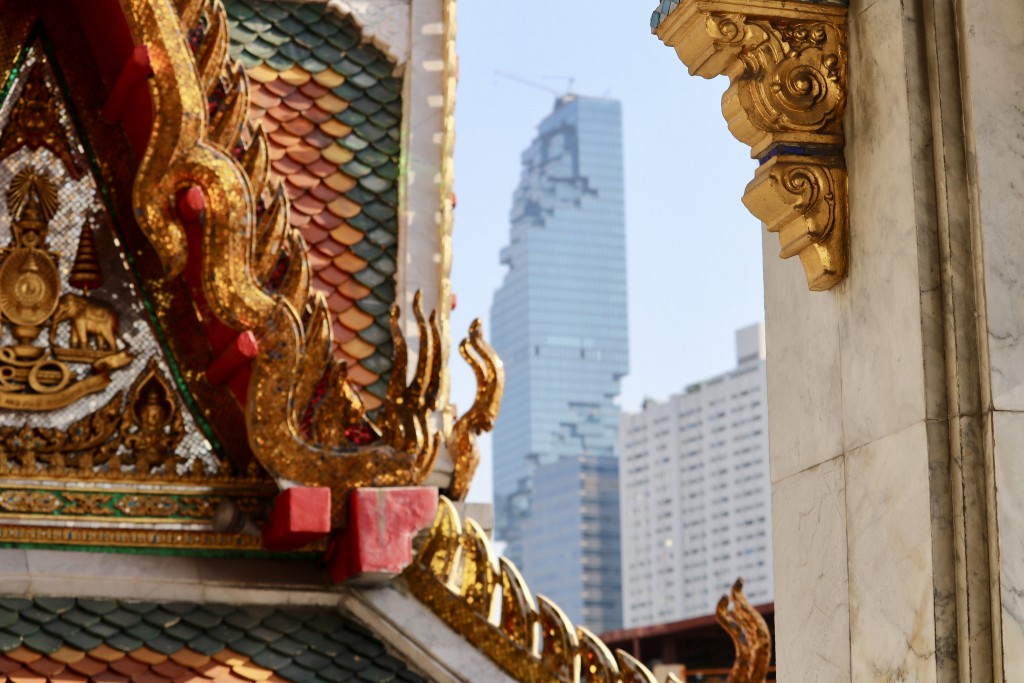 Ruins
Airplane salvage graveyard in Bangkok | © Dax Ward / Shutterstock
No area of Bangkok tells a better visual story than the Airplane Graveyard. Found in the eastern neighborhood of Ramkhamhaeng, this lot is home to decommissioned aircraft. Amid the debris, photographers will discover that some families have made this place their home, their laundry hang-drying among the airplane relics. They usually charge some sort of entrance fee (about $4) to visit and take photographs.
More Info
Open In Google Maps
Ramkhamhaeng Alley 103, Khwaeng Hua Mak, Khet Bang Kapi Krung Thep Maha Nakhon, 10240, Thailand
View menu
Visit website
Visit Facebook page
Send an Email
Give us feedback

Many years ago, the Thai capital was dubbed the Venice of the East because of the many canals that ran through the city. Many of these waterways have since been filled in, to make way for Bangkok’s expanding concrete jungle, however, some khlongs (canals) remain in the city today. Their main purpose is to serve as a means of transportation, and the water, boats, and passengers certainly provide photographers with some noteworthy shots. These waterways run from Banglamphu to Ramkhamhaeng, and photographers can hop on and off as they please for incredibly affordable prices (about ฿10-20).

Park
Watch a sepak takraw showdown at Lumpini Park | © Tuomas Lehtinen / Alamy Stock Photo
Book Now
A plethora of duck boats, a colorful Chinese pavilion, towering skyscrapers acting as a backdrop: there are plenty of reasons as to why photographers should gather their gear and head to Lumpini Park. The green space is more than half a million square meters in size, and you could be here for hours exploring it in its entirety. For a great shot, be on the lookout for one of the many large monitor lizards who call this park home. They are usually found on the exterior of one of the lakes or sunbathing on the large patches of grass.
More Info
Open In Google Maps
Rama IV Road, Khwaeng Lumphini, Khet Pathum Wan Krung Thep Maha Nakhon, 10330, Thailand
+6622527006
View menu
Visit website
Visit Facebook page
Send an Email
Give us feedback

Shrine
Lay down offerings at the Erawan Shrine | © Khim Hoe Ng / Alamy Stock Photo
Book Now
Located in the center of the city is the Erawan Shrine. It was built in the 1950s. This Brahman shrine was made to protect the surrounding area after it was plagued by a series of unfortunate events, including the delayed construction of the Grand Hyatt Erawan. Locals gather here at all times of day, to light incense. It is best photographed at night from the walkway above it. The walkway connects Siam and Chit Lom.
More Info
Open In Google Maps
Ratchadamri Road, Khwaeng Lumphini, Khet Pathum Wan Krung Thep Maha Nakhon, 10330, Thailand
View menu
Visit website
Visit Facebook page
Send an Email
Give us feedback

Train Station
Bangkok, Hua Lamphong Train Station | © Courtesy of Pietro Motta/Flickr
Not many people would believe that an old train station would be one of the best places for photographers to frequent in the capital. The Hua Lamphong Train Station certainly makes the cut, however. Those who enjoy taking portraits will always discover a smiling face or two stuck out though an open window of one of the trains, seemingly just waiting to have their picture taken. In addition to photographing people both on and off the train, the station itself is an architectural wonder, built in the early 1900s.
More Info
Open In Google Maps
Rong Mueang Road, Khwaeng Rong Muang, Khet Pathum Wan Krung Thep Maha Nakhon, 10330, Thailand
View menu
Visit website
Visit Facebook page
Send an Email
Give us feedback

From the strange eats to the abundance of souvenir and shopping vendors tucked in-between the many sois (streets), there is seemingly no shortage of photo opportunities in Chinatown. Maybe it is the gaudy gold shops which catch photographers’ eyes (no photographs are allowed inside of these shops, however). Tuk-tuks are especially photogenic, lining the neon-lit street. During the day, head to Sampeng Lane to photograph everything from wig shops to entire stores dedicated to colorful stuffed animals. After dark, be sure to head to Yaowarat Road for the food, lights, and more, just waiting to have their pictures taken. 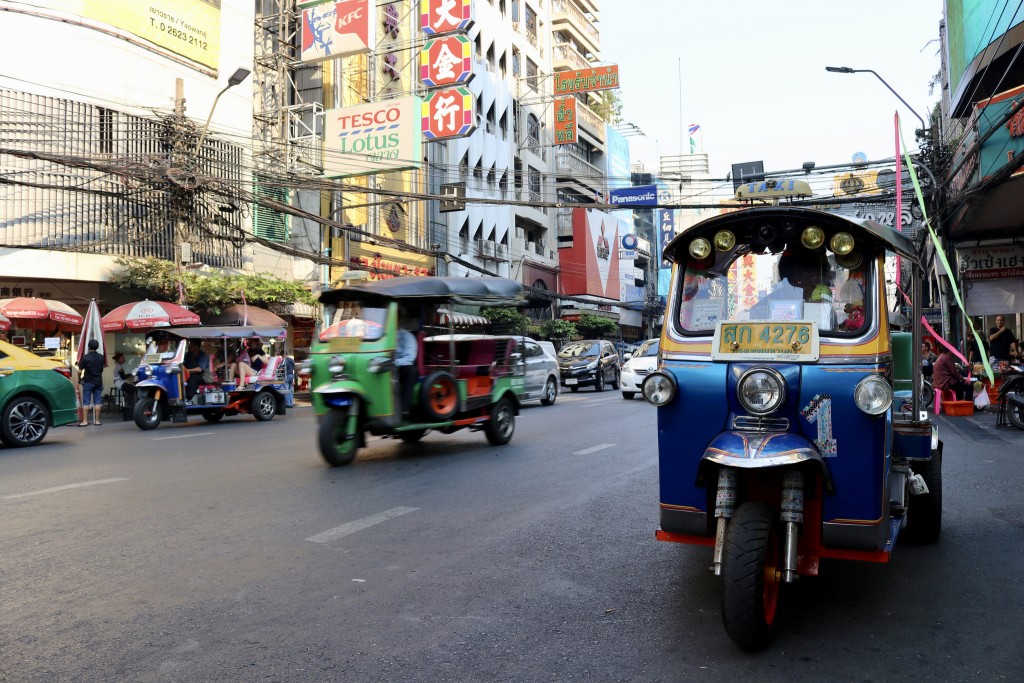 Market
Explore the flower market | © palawat744 / Shutterstock
Book Now
The Flower Market located on Chak Phet Road is one of the most colorful and vibrant parts of town. Goods and souvenirs are great, but no market is as ready for their close-up as Pak Khlong Talad is. This market is a rare and stunning entity in an oftentimes gray and overbearingly urban city. As the largest cut flower market in Thailand (and arguably one of the largest in the world), photographers are bound to get great shots of the foliage, vendors, and shoppers amid all of the chaos.
More Info
Open In Google Maps
Khwaeng Wang Burapha Phirom, Khet Phra Nakhon Krung Thep Maha Nakhon, 10200, Thailand
View menu
Visit website
Visit Facebook page
Send an Email
Give us feedback

As one of the most visited landmarks in Thailand, photographers are going to have to get creative in order to rid selfie-taking tourists from their perfect shot. Those able to do so, however, will certainly have a noteworthy stack of photographs. One of the palace’s most prominent features is Wat Phra Kaew, the temple that sits in the scenic grounds. Both are worthy of a photo (or ten). 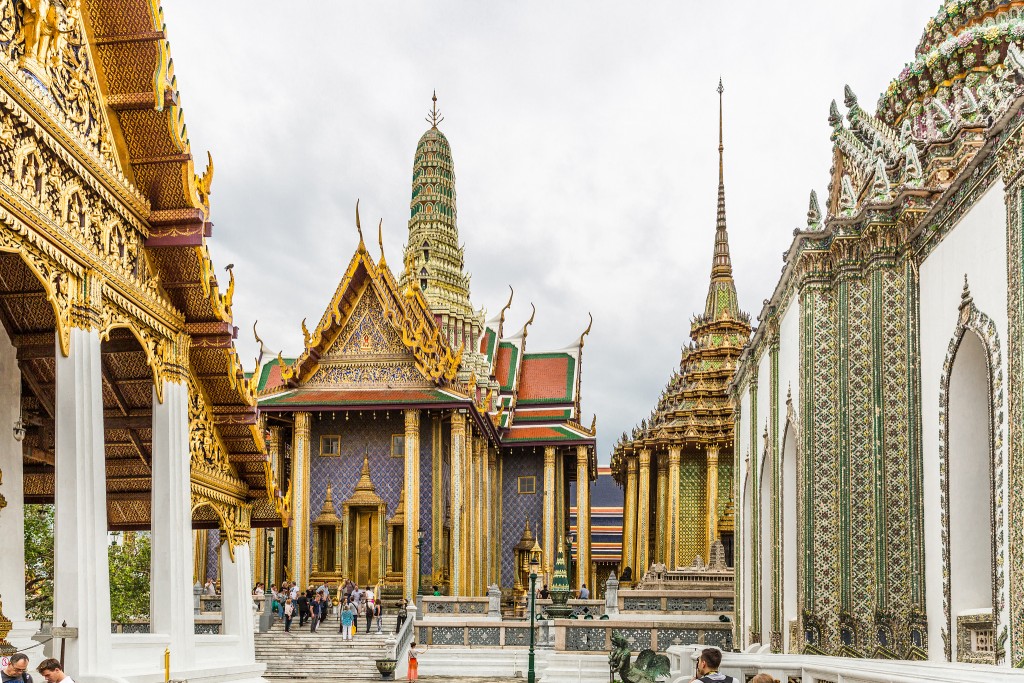 Buddhist Temple
Wat Arun at Dusk | Wat Arun at Dusk
Wat Arun is one of the most popular and historic temples in the country, let alone the capital. The Buddhist temple sits along the western banks of the Mae Nam Chao Phraya, more popularly known as the Chao Phraya River. Though the 19th-century temple is chock full of colorful murals and intricate porcelain that are beautiful when seen up close and personal, the best place to shoot its 82-meter high spire is from across the river. Visit any one of the bars or restaurants across the way at sunset to get that perfect photograph. The Deck by Arun Residence provides a great vista.
More Info
Open In Google Maps
158 Thanon Wang Doem, Khwaeng Wat Arun, Khet Bangkok Yai Krung Thep Maha Nakhon, 10600, Thailand
+6628912185
View menu
Visit website
Visit Facebook page
Send an Email
Give us feedback

Bar, Cocktails
While many tourists frequent Soi Cowboy with nothing but cash and (hopefully) condoms in tow, this stretch of road allows for some great photographs as well. The soi (street) is lit up with eerie red and blue neon lights, telling visitors the name of the strip clubs lining road. Soi Cowboy is best shot with a tripod after dark, when the street is buzzing with both workers and customers alike.
More Info
Open In Google Maps
Soi Cowboy, Khwaeng Khlong Toei Nuea, Khet Watthana Krung Thep Maha Nakhon, 10110, Thailand
View menu
Visit website
Visit Facebook page
Send an Email
Give us feedback
Book with our partner and we will earn a small commission.
Give us feedback