The Best of Thailand's Pop Music 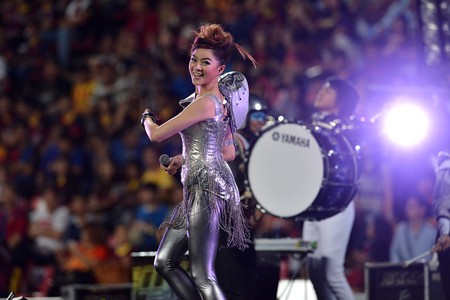 So you’ve heard of K-Pop but what about the T-Pop stars of Thailand? Read on to discover the best of Thai pop music.

Tata Young, or “Asia’s Queen of Pop” as she is known, is Thailand’s most famous female pop singer. The half Thai-half American who became famous at just 15 is met with mixed reviews in Thailand for not being “typically” Thai enough. Her international fame came with the album “I Believe” and the single “Sexy, Naughty, Bitchy.” Over her career, Tata Young has released eight albums (five in Thai and three in English) and has also acted in three Thai films.

Dominating the current Thai pop charts is T-Pop group Klear with their “One Time Won’t Kill You” single. This sassy three-men-one-woman group are quintessentially Thai pop legends. They have the looks, the tug-on-the-heart-string lyrics and put on a good live show too.

Arguably one of Thailand’s most famous male pop singers, Bird Thongchai ticks all the boxes with his handsome looks and romantic love songs. Bird Thongchai is a gay man, who is affectionately called “Aunty Bird”, he’s not only known for his singing skills but also his acting talent as he has starred in a bunch of Thai movies and local drama series (lakorn).

Golf Mike is in actual fact Golf and Mike – a brother duo act. Golf Mike are known for their fun and catchy lyrics and brilliant dance moves. Thai girls go crazy for these two especially when live in action at their concerts. Their first single, “Bounce” rocked Thai dance floors across the countries and still does. They have put out a bunch of albums with “One by One” and “Golf-Mike” being two of the most successful.

Atom Chanagun’s top three hits “Dust”, “Please”, and “Aow” have each received over ten million views on YouTube. Most of his videos involve some kind of relationship drama which Thai audiences love. Atom Chanagun’s beautiful and unique voice has kept him high in the Thai pop star rankings for quite some time.

Endorphine or ‘Endopheen’ as their name is pronounced locally was a four-member band that were known for their catchy tunes and lively performances. The band broke up with lead singer Da going solo and still going strong today. Da Endorphine is one of Thailand’s most successful female pop artists and has won a handful of industry awards.

Sadly, another group, well actually two guys, who are no longer together. Peacemaker were famous for their heartfelt and beautiful ballads. The duo were relatable and are still an inspiration for Thai youth today. For a lyrical treat check out their album “Peacemaker” and their single “Kit Theung” (Missing You).