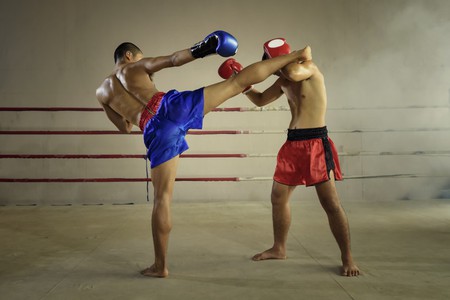 Muay Thai, or Thai boxing, is Thailand’s national sport. While there are many places around Bangkok to watch an exciting fight, what if you want to join the action? Whether you want to practice Muay Thai for fitness or train to become an unbeatable force in the ring, here are Bangkok’s best Muay Thai camps and gyms. 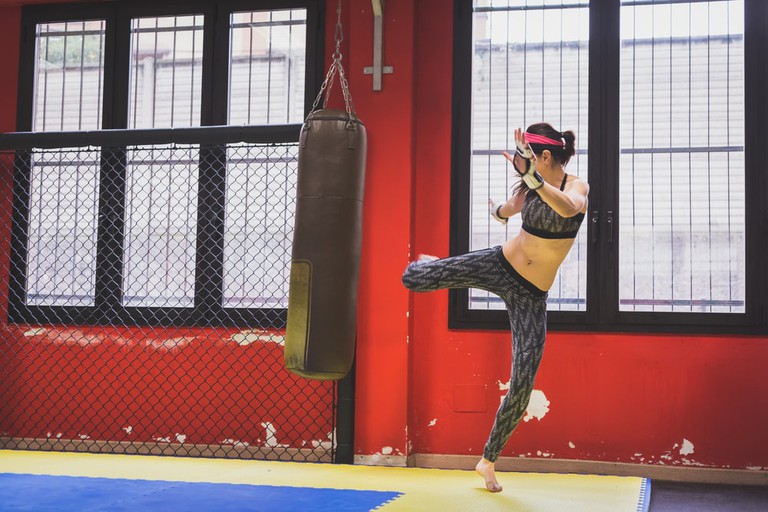 Woman practicing her kicks | © Tinxi/Shutterstock
Certified by the Thai Ministry of Education, Master Toddy’s Muay Thai Academy is a prestigious place to train in Bangkok. The certification means that people who train at the gym can get education visas to stay in Thailand. The head instructor is Thohsaphol Sitiwatjana, also known as Grand Master Toddy. Fighting since a young age and teaching others since the age of 16, the Thai-American Muay Thai master has many achievements under his belt. As well as having won many fights and training top fighters, including the first International Woman’s World Muay Thai Champion, Sitiwatjana has set up hundreds of Muay Thai camps and gyms around the world, founded the Muay Thai International Association, and was featured in a James Bond film! The gym offers private and group sessions at various times throughout the day, and people can sign up for weekly, monthly, and yearly packages. Both men and women train at this gym. Additionally, Muay Thai fighters who want to become trainers can become certified instructors here. 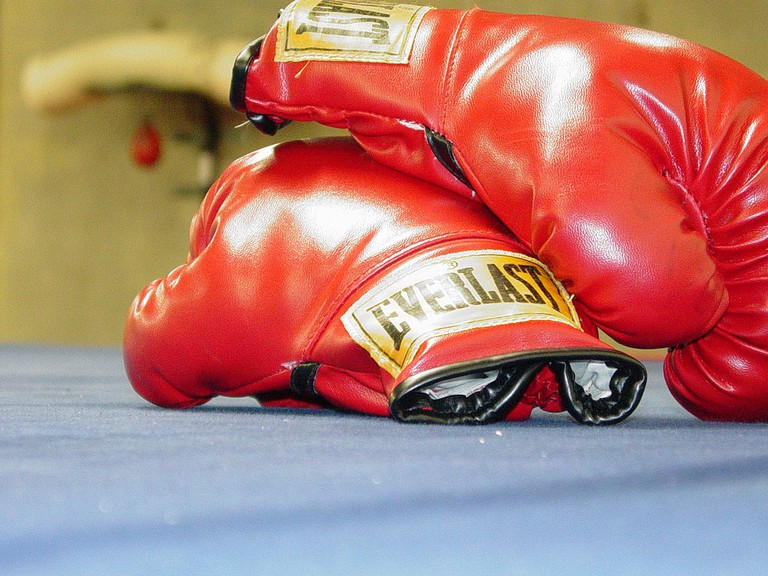 Boxing gloves | © Kristin Wall/Flickr
Muay Chaiya Baanchangthai Camp was founded by Kridakorn Sodprasert, also known as Kru Lek, a prize fighter from a young age and a trainer for many years. His aim is to preserve various Thai traditions, and you’ll find arts here as well as boxing. Unlike many other camps, Muay Chaiya Baanchangthai Camp focuses on one particular type of Muay Thai: Muay Chaiya. This ancient style of fighting seizes on the weaknesses and mistakes of opponents to outwit them with distance, low kicks, and sharp and fluid jabs, while using defensive positions. There’s a strong emphasis on control, calmness, and humility. The camp attracts a good mixture of Thai and foreign students, and you can take private or group sessions. Group sessions cater to people of different experience levels. During your package, you can also use the gym’s facilities for free at any time. 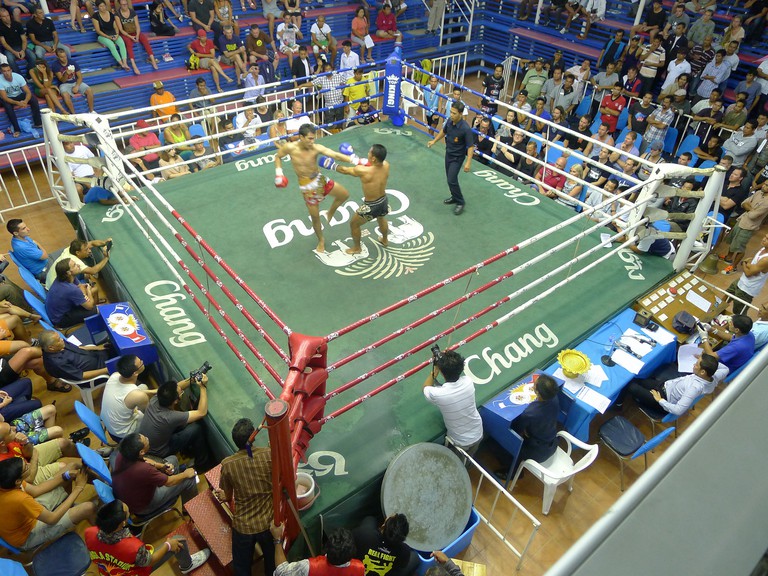 Are you ready to enter the ring? | © wales_gibbons/Flickr
As the name implies, Elite Fight Club has a team of experienced and top-level trainers, and produces some of the nation’s best Muay Thai fighters. Located in Thonglor, the gym is better suited to existing fighters who want to improve their technique and skills as opposed to beginners just starting out on their Muay Thai journey. The connections you can make here are almost as valuable as the actual training. The modern facilities make training more comfortable too. The gym is part of a global chain, with camps in other parts of Thailand, Australia, Germany, and Bulgaria. It arranges regular in-house fights and events between the different franchises, so there’s a good chance of getting in the ring against an opponent pretty quickly. There are different courses to choose from, and private sessions are available. The Muay Thai Fighter course is best for people who want to take their fighting game as far as they can. The Muay Thai Expat course is better for people who want to improve their fitness while learning more about Thai boxing without necessarily wanting to fight professionally.

Petchyindee Academy is an especially great Bangkok Muay Thai camp for beginners. There’s an onsite hotel, which is good for travellers who want to immerse themselves fully in the Muay Thai experience. You can pay for individual private and group sessions too; there’s no need to sign up for a course to possibly find that it’s not something you like to do. In addition to excellent trainers and modern equipment, you’ll find a sauna, a steam room, a Jacuzzi, and the option to buy healthy Thai meals. A variety of general fitness classes, like Zumba, are available too. Both males and females train here. This Muay Thai camp is terrific for people who want to focus more on all-around fitness and learning the traditional art of Muay Thai, rather than those who have a burning desire to make it into a professional boxing ring. 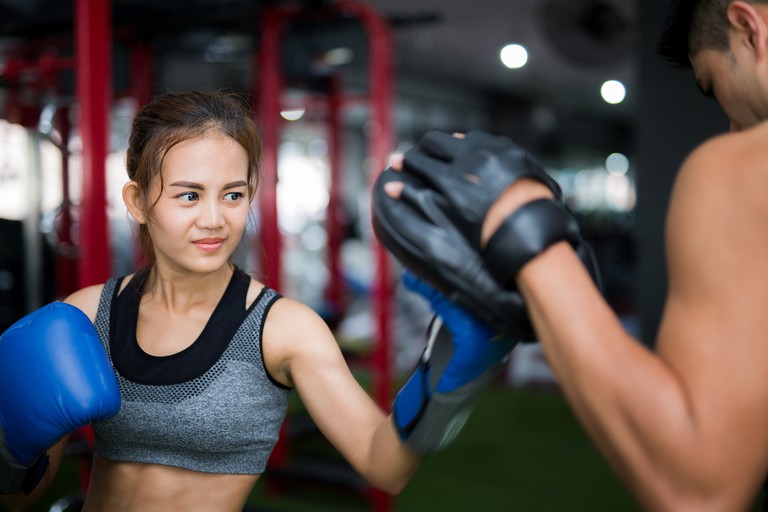 Young woman doing pad work in a Muay Thai gym | © anekoho/Shutterstock
RSM Muay Thai Academy can be found on the Thonburi side of Bangkok. A fairly new gym with modern facilities and hints of luxury, it attracts more than its fair share of affluent Thais and celebrities who have an interest in Muay Thai as part of a general fitness routine. Training is available for children and adults as well as for people of both sexes. Instructors come from fighting and fitness backgrounds. People who are more interested in the fighting aspect of Muay Thai won’t be disappointed, though, as there are specialist courses for developing the skills needed to compete. A good all-around camp, you’ll find people here of all ages and experience levels, with a nice balance between Thai and foreign attendees. Day passes and multi-day packages are available. 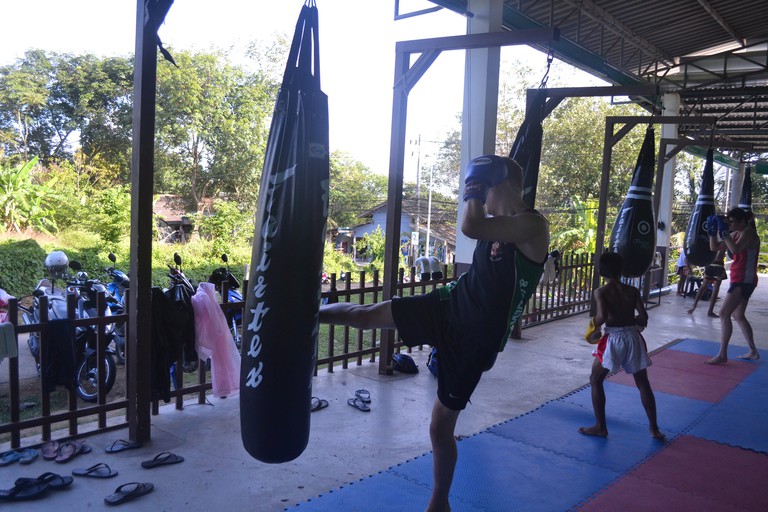 Children and adults practicing in a Muay Thai gym | © wales_gibbons/Flickr
A top Bangkok training centre for people who have an interest in different types of martial arts, The Fight Lab offers instruction in Muay Thai, wrestling, jui-jitsu, and more. It has its own boxing ring and MMA cage, and classes feature a lot of time in the ring or cage to perfect fighting techniques. Trainees should have a good level of general fitness before starting here, and it helps immensely to already have some martial arts experience (though it’s not essential). Trainers are from the top tiers in their respective disciplines and come from various parts of the world. There are classes for children as well as group and individual sessions for adults.

A popular Bangkok Muay Thai gym for people who want to train alongside some of the biggest names in the sport, F.A. Group is the home gym of Petchboonchu, a Muay Thai world champion. The legend defeated many well-known fighters and regularly fought at Lumpinee Boxing Stadium. Petchboonchu is known for his strong clinching skills, and this gym is a great place for people who want to develop their own clinching and knee techniques. Sessions focus largely on clinching, and people work individually or in couples with sparring, pads, bags, etc. The gym is fairly small, and the equipment isn’t the most modern; it’s the reputation and high-quality fighters that make this a sought-after training centre. There’s a good mixture of Thai and foreign trainees, though the gym doesn’t particularly enter foreigners into fights. If you want to train with the best and perfect clinching, this gym is great. If, however, you’re seeking glory in the ring, other camps would likely be more suited to you. The gym is located in Chatuchak, and it has onsite accommodation. 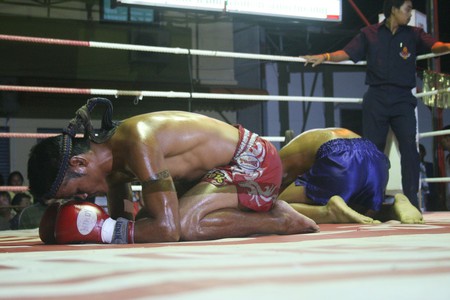