The Best Cycling Tours in Bangkok 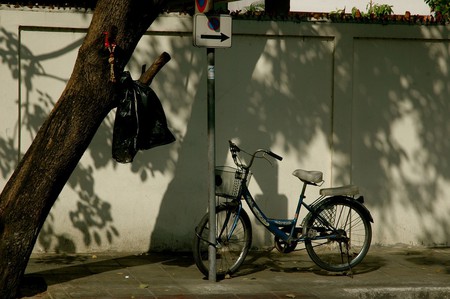 The many canals and rivers that flow through Bangkok have seen the city being dubbed the “Venice of the East” by many people. Yet despite this nickname, a longtail boat on the Chao Phraya river is a million miles away from a gondola or water taxi in Italy’s scenic floating city. A more fitting nickname then is the “Amsterdam of the East”, as like its Dutch counterpart, Bangkok is best seen on two wheels. Curious? Here are the best cycling tours in Bangkok.

The Bangkok Night Bike tour offers an alternative and unforgettable take on Bangkok’s nightlife. The city comes alive at night, illuminated in colour and with plenty of things to see, and experiencing it on two wheels during the lower evening temperatures is cool in every sense of the word. The tour departs at 6 pm, weaving through alleyways and past historic temples, before crossing the river to the majestic Wat Arun temple. The ride is easy, and also takes in the colourful flower market, the revered Wat Pho temples and many other places of interest along the way. At 13km, it’s not the most gruelling, but enough for you to want to reward yourself with the more popular forms of Bangkok’s nightlife once the tour is over. 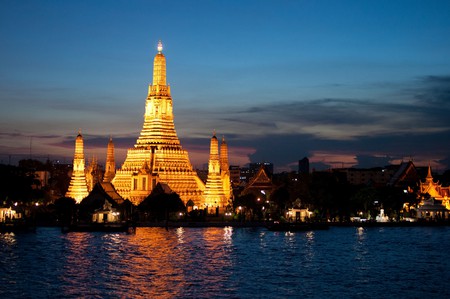 Bangkok is far more than just skyscrapers, apartments and shopping centres – and a bike tour through the leafy oasis of Bang Krachao is proof of this. Known as Bangkok’s green lung thanks to both its function and physical shape, it sits on an oxbow on the Chao Phraya river and is a world away from the concrete jungle that most associate with Bangkok. Arriving by ferry, you’ll cycle through this green haven, passing traditional Thai houses and alongside stunning natural scenes that will make you feel as though you’ve been transported back in time. Passing mangroves and villages, you’ll stop to appreciate ornate shrines and temples before making your way back to the bedlam that is Bangkok – though the few hours you’ll spend here are enough to recharge your batteries. With flat terrain and at 20km in length, it’s not particularly taxing and the natural green surroundings and lack of traffic will make it feel like a pleasure, rather than a chore. 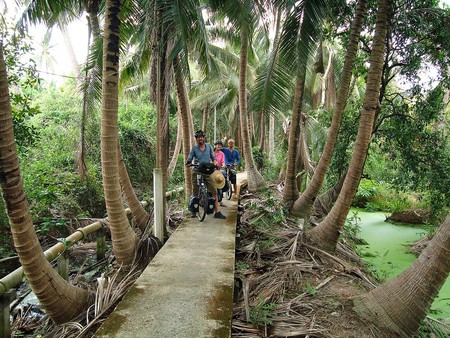 Travellers to Thailand and all over the world yearn for authenticity and a slice of the “real” life of the places they visit, and it’s hard to get a more authentic picture of life in Bangkok than you’ll get with the Bike Historic Bangkok tour. Years in the making, it’s a trip that truly takes you down the back alleys and small sois that tourists seldom venture to. This mazy journey shows the diversity of Bangkok that’s often underreported, passing through both Muslim communities and Buddhist temples to show you how these groups live side by side with one another in peace. Only towards the end will you see signs of life, as the tour takes in the dramatic, historical sites of the Grand Palace and the Giant Swing before finishing back at base. At around four hours, it’s a great way to spend a few hours enjoying a side to Bangkok few get to see and offers a real slice of what life in this great capital is really like. 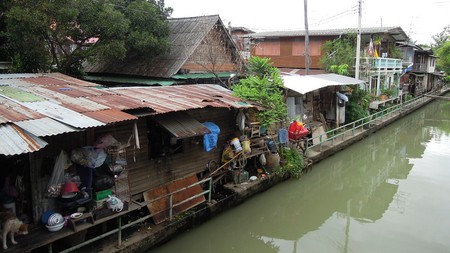 Get a glimpse into everyday life | © David McKelvey/Flickr

It’s hard to appreciate the scale and the size of Bangkok unless it’s seen from up on high, and that’s exactly what the Twilight Sunset Ride offers the chance to do. It’s perfect for beginners, at around three hours long, and is conducted at a leisurely pace with plenty of opportunities to stop and take a picture. The tour begins with a cycle through the backstreets, before stopping at a majestic temple that’s home to the largest standing Buddha image in the city. The tour then incorporates a series of cultural stops, such as the traditional Thai custom of feeding the fish, a visit to see the royal barges in their warehouse and a stop at one of Thailand’s famous universities. Before reaching the Golden Mount, you’ll get the chance to see Bangkok zoo and to marvel at neoclassical Samakhom throne hall, built in 1915. The Golden Mount is the final stop, where you can enjoy gorgeous views of the city as the sun sets on the horizon. 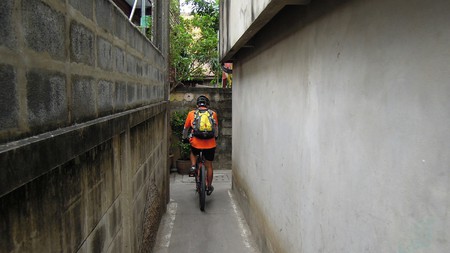 Cycle through the side streets | © David McKelvey/Flickr

With some of the finest temples in all of Asia, it’s important to set aside plenty of time to get to see the best of them, and that’s exactly what the eight hour long Bangkok Temple Tour does. Fittingly, the first stop is the Old Customs House – the first stop for travellers many moons ago – and it serves almost as a portal into the past. After a trip through Chinatown, the tour takes you to the Phra Nakhon district, where you’ll see various historic points of interest such as Wat Pho, Loha Prasat temple and the Sanam Luang gardens, which recently played a huge role in the funeral of beloved former King Rama IX. After crossing the river, more temples will be on the agenda, including the stunning Wat Arun temple, before heading back to base to talk about your trip and take in a few refreshments. This tour takes in plenty of temples that would be difficult to view and rushed if attempted to see in one day on foot, so it’s an essential for those who are short on days in the city. 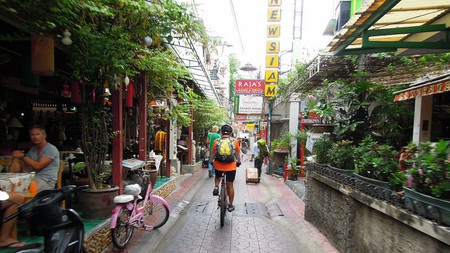 A world away from the backpacker surroundings of Khaosan Road, this bike tour takes you on a trip through the lively streets of Chinatown, as well as “living part of Bangkok” to see what life is like for the people who live here. It has everything you’d expect from a bike tour of Bangkok; winding streets full of thousands of stories, bustling markets full of friendly locals and passing glimpses of everyday life, from people praying in temples you won’t find in guidebooks and people making a living without the need of tourists. You’ll cross the river into Thonburi, where laid-back Thai life is perfectly exemplified by its noticeable change of pace and lifestyle – though the locals are still friendly and welcoming. 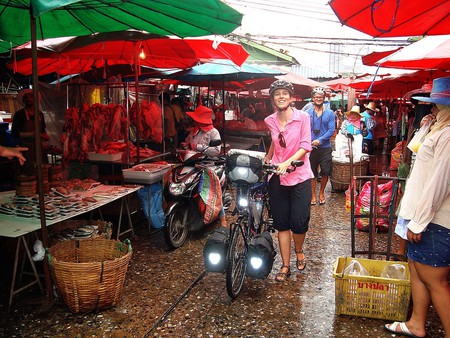 Biking through a market | © Paul_the_seeker/Flickr

Worried that the amount of time that you spend cycling through Bangkok will drastically cut into your eating time? Well, thanks to the Thai Tapas Tour, you needn’t worry any longer. The Thai Tapas Tour combines everyone’s two favourite features of travelling – seeing the sights and eating the food – into one handy trip. A pedal around the backstreets will see you stop various times to taste food from carefully-selected vendors, giving you a taste of real Thai street food and the chance to taste various dishes that you may not have come across on your own. As well as street food, you’ll also stop at Bangkok’s biggest 24-hour fresh market to see where Bangkok buys its fresh produce from, before sitting down to a delicious dinner that you’ll no-doubt have earned. 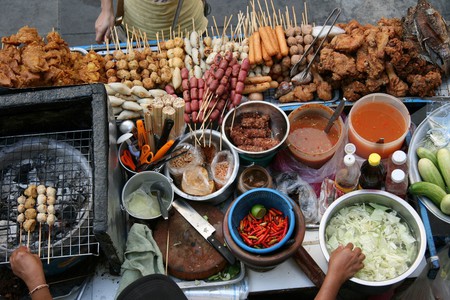 This night tour of Bangkok is almost like a vivid dream, with its bright palette of neon colours, strong smells and unimaginable experiences. The night begins in Chinatown, a hub of life at all hours and especially at this time, and with a trip to a local shrine, where the otherworldly smell of incense will set your mind a-wander. You’ll experience its stalls and streets, before enjoying a delicious street food dinner that’s even better than the guidebooks had you believe. On then to the flower market, where your senses will be pushed to their limits with the dazzling sights of the colourful flowers and their scents will fill your head. A cycle across the river will see Bangkok open up in front of you before the night ends and you return home, where it will be hard to separate dream from reality. Bangkok comes alive at night, and it’s evident on the tour. 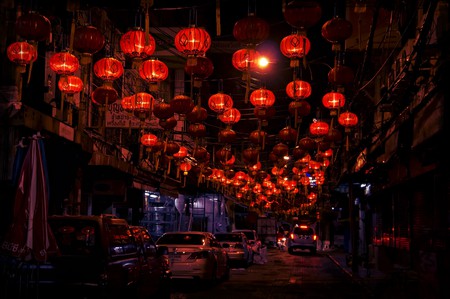 Bangkok’s Chinatown by night | © hjjanisch/Flickr
Give us feedback