The Best Beers You Need to Drink in Thailand 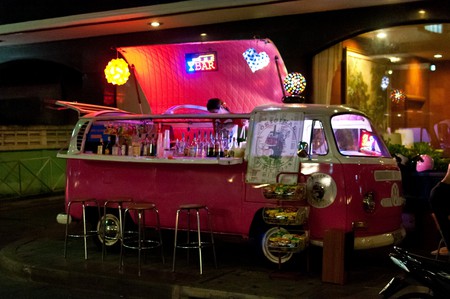 Craft beer remains a grey area in Thailand. Home brewing is against the law, and high import taxes can often see those that make it through left on the shelf due to their prices. In a country dominated by the big three – Chang, Singha and Leo – it can often leave you desperate to try something – anything – different to lager. Scratch beneath the surface however, and you’ll find what you’re looking for. Here’s a guide to the best beers to drink on Thailand and – spoiler alert – you won’t find them emblazoned on singlets.

“Chalawan” is an old Thai word for alligator, and much like its namesake it certainly bites, with fruity, slightly sour notes. At 4.7% it’s an easy drink for those long, hot nights, with an exotic taste to suit its tropical climate. Phuket’s Full Moon brewery is one of the breweries leading the craft brewery charge in Thailand, with this beer taking gold in the World Beer Awards 2016.

Taopiphop was recently in the news after being arrested for operating a microbrewery. Undeterred, he’s since moved his brewing operations to Stone Head Brewery in Cambodia in order to comply with the law, and Hurster is the delicious, once-forbidden fruit of his endeavours. A Saison, it comes with floral notes that are to be expected, and it pours a light-medium amber colour. Available at several bars in Bangkok.

With an overall score of 94 on RateBeer.com, Eleventh Fort’s Black India Pale Ale is about as far removed from a Chang you’ll find in Thailand. Dark brown in colour, it’s malty with coffee and chocolate notes and very drinkable. Good, long-lasting head with a medium-bitter taste and light carbonation. One of many fine beers that have emerged from the Eleventh Fort brewery in recent years.

What the PUG Citra Bomb

Recognisable by the pug on the label, as the name suggests this is an IPA with a strong citrus flavour. Like citrus fruits, it’s slightly sour tasting yet pleasant, with a herbal, pineapple aroma that’s inviting and intriguing. Deep amber in colour and with good lacing, as well as citrus you’ll find mango and wood notes in this delectable IPA alongside a smooth, medium body.

With average temperatures in the 30s, one wouldn’t typically associate Thailand with stout beers, but the Silom Pirates Stout makes it work. With rum and raisin notes, it’s perfect for the heat and more than deserving of its pirate title. At 10%, it’s not one to knock back at a rate of knots, but rather one that’s to be enjoyed. A deep, softly-carbonated typical stout drinking experience, watch out for hints of chocolate and coffee that come through.

Monsoon is in the name, and the chocolate Bounty bar-esque flavour of this stout is perfect and comforting for those monsoon downpours that happen in Thailand’s rainy season. With strong flavours of coconut – a popular ingredient in Thai cuisine, it’s inexplicably Thai despite remaining worlds apart from the mainstream Thai beers, with chocolate and coffee notes also coming through to complete a slightly bitter, slightly sweet flavour profile.

Made from Thailand’s fragrant jasmine rice, Phuket Lager is a little different to the four-packs you might pick up in 7-Eleven. With a typically golden-lager colour, it has a deceptive range of flavours – pineapple and passionfruit are prominent to make it a lager worthy of its tropical surroundings, while it’s also slightly hoppy and citrusy. Available all over Thailand, it’s popular and another graduate of Phuket’s successful Full Moon brewery.

I need a pint of this #phuketlagerbeer.

A product of Bangkok’s Nectary brewery, Nectar Amber Ale is a pleasant, hoppy amber ale that’s perfect for any occasion. It’s a feast of mediums; medium sweet, medium bitter, medium body and medium carbonation, it works together to create a treat of a beer that’s certainly above average. With citrus and exotic mango notes coming through, it’s perfect for the climate of Thailand and a beer that you’ll want to revisit again and again.

An opaque porter that’s equally smoky as it is sweet, it’s equally as welcome in an American smokehouse as it is on the beach in Thailand. With an almost-black colour and flat carbonation, it embodies the molasses which are prominent in its flavour profile, along with chocolate and liquorice to create a beer that’s perfect for a sweet tooth and despicably moreish. There’s much more to Thailand than commercial lager, and this is living proof.