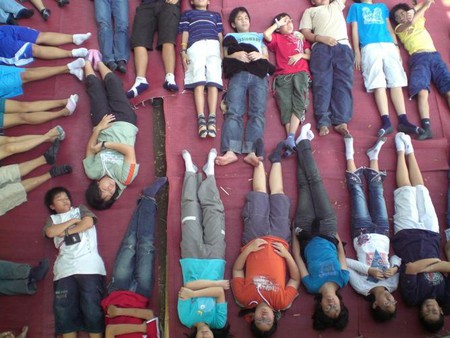 Thailand’s art scene has entered a period of rapid development. A series of cutting-edge exhibition spaces have popped up in Bangkok to accommodate a new generation of Thai artists who are influenced by the traditions of their cultural heritage, but who simultaneously engage with Western influences. From globalization to environmentalism, these are the four Thai artists to watch.

Thailand is known worldwide for its exquisite cuisine, and contemporary artist Rirkrit Tiravanija engages with this phenomenon in his project titled Free. First presented in 1992 at 303 Gallery in New York City, the concept is simple: the artist transforms an exhibition space into a lounge area where he cooks and serves Thai curry and rice for free. The audience eats and interacts, discussing the ‘installation,’ the food, and the experience. Rirkrit Tiravanija was born in Argentina in 1961, but raised in Thailand. Creating a social setting and bringing people together is at the center of his work. He was awarded the Hugo Boss Prize in 2004.

Life, death, and identity are the central topics Araya Rasdjarmrearnsook has analyzed throughout the years. The viewer can observe the photographer and video artist explaining death to the dead (she actually “borrowed” corpses at a morgue), pigs being slaughtered, and mentally unstable women telling their life story. In one of her more recent works, Rasdjarmrearnsook plays with the differences and similarities between the Asian and the Western world. Educated in Thailand and Germany, the artist celebrates the differences in these cultures through lighthearted humor. Her series of videos titled Two Planets/Village and Elsewhere confront Thai villagers with the works of famous European and American masterpieces. Their reactions and comments to Jean-François Millet’s The Gleaners or Jeff Koons’ Wolfman, for example, show a culturally distinct Thai audience, but underline also the pretentiousness and conventionality of responses to art in Western societies.

Born in 1957, Vasan Sitthiket, a self-acclaimed anarchist and painter, is the only Thai artist whose work is featured in the collection of MoMA. Without making a distinction between national and international issues, his paintings attack society directly. Sitthiket declared in 2010, “As an artist, I use my art as my weapon, to crash the public, to change what I disagree with.” The painter uses bright and strong colours, a dynamic brushwork and aggressive, erotic imagery to bring his convictions onto the canvas. Although Vasan Sitthiket had many exhibitions in Bangkok, it remains difficult for him to find an interested audience, especially in Thailand. Many of his compatriots are shocked by the bluntness of his paintings.

Involving the audience in his work, the performance and installation artist Surasi Kusolwong creates an interactive field that questions consumerism and globalization as well as the role of the individual within these settings. One of his most interesting works is his project Market (from 1999 until today). The artist creates his stage in which different market stands representing countries all over the world are positioned, and viewers are compelled to become customers and active parts in his public performance. Selling cheap everyday products at an even cheaper price, the artist draws a direct line to the business that is contemporary art, and the globalization that has accompanies this business. Kusolwong himself figures as a joyful salesman, using music and entertainment to pursue the audience. The artist’s work focuses on economic democracy and social exchange, but with an ironic and playful undertone.