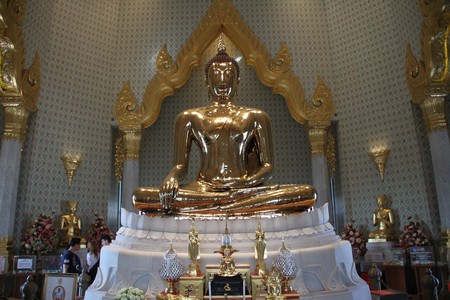 Thailand has many gleaming temples and revered Buddha images. But did you know the Land of Smiles is home to the biggest Buddha made from solid gold in the world? And, the statue has a fascinating history!

Visit Bangkok’s temple of Wat Traimit and you’ll find a seated, cross-legged Buddha statue known as Phra Phuttha Maha Suwana Patimakon. Unlike many Buddha images, which are gilded, this statue is made from pure gold. Standing at 3.91 metres tall and 3.01 metres wide, it is the world’s biggest solid gold Buddha statue. It weighs a staggering five and a half tons!

The golden image perhaps looks like many other statues of the Lord Buddha, but it becomes even more interesting when you learn about the statue’s incredible history. 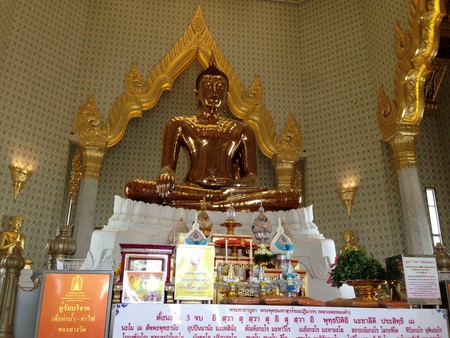 At some point in Ayutthaya, the highly valuable golden statue was covered with a layer of concrete with sparkling glass in an attempt to conceal its true significance and protect it from thieves. Scholars believe that this must certainly have happened before the ancient city of Ayutthaya was captured by Burmese invaders. 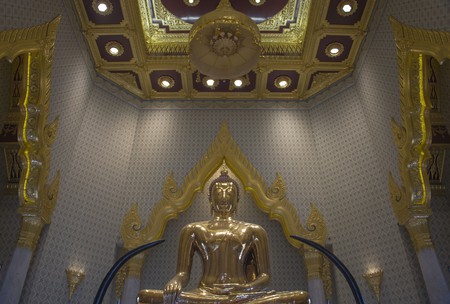 When the Burmese captured Ayutthaya they removed almost all items of value. Stories abound of golden statues being looted and taken back to Burma to be melted down! Furthermore, later looters removed many heads from stone statues to be sold on the black market overseas. This is why many of Ayutthaya’s Buddha statues have no heads today. The stucco disguise, combined with good luck, likely saved the Phra Phuttha Maha Suwana Patimakon Buddha from being lost forever.

The golden statue stood hidden among the ruins of Ayutthaya for many years. When the new capital was established in Bangkok, the king ordered the relocation of old statues from around the country. And so the golden statue was once again moved, probably at some point in the early 1800s.

Still disguised, the statue took pride of place as the main Buddha statue in Bangkok’s Wat Chotanaram. This temple gradually fell into a state of disrepair and disuse, so was closed. The secret treasure was taken to Chinatown’s Wat Traimit, at that time a minor Bangkok temple in a sea of numerous other small places of worship.

Due to lack of space, the statue was stored in a basic building with a tin roof. Nobody realised its true importance! Eventually, a new building was constructed for the statue. When the statue was being carried to its new home, it was accidentally damaged. Normally this would be a source of great sadness. In this case, however, the damage revealed gold glinting through the concrete casing. In 1954, the statue’s real splendour was finally revealed! 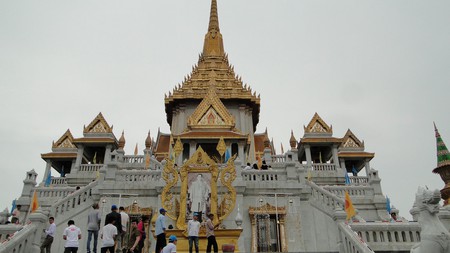 After all the concrete and glass had been carefully removed, the image was displayed with pride, with another new building later created to fully showcase the beautiful statue’s glory.

The timing of the discovery, almost 2,500 years after the death of Siddhartha Gautama, combined with the fact that it had managed to remain a secret for so long, has led many Thai Buddhists to see the statue as miraculous.