The 11 Best Dive and Snorkelling Spots in Koh Tao, Thailand 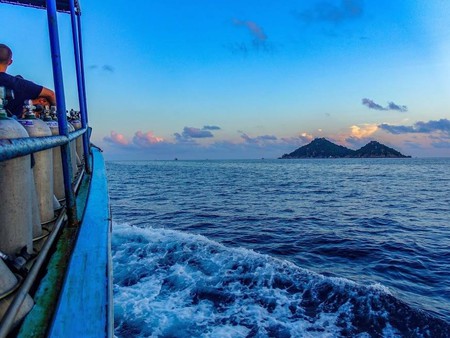 Sailing off for a dive | © Roctopus Dive

Koh Tao, Thailand, barely a blip on the map of the greater Gulf region, has around 20 kilometres of beautiful coastline that gently slopes underwater towards stunning marine ecosystems.

Whether you’re first taking the proverbial plunge or a seasoned mermaid, don’t miss the opportunity to explore these incredible underwater sites.

Look out for: Enormous schools of pelagic fish, whirl-pooling barracudas, if you’re lucky – a whale shark.

Regularly referred to as the “best site in the Gulf of Thailand,” Sail Rock is the open-ocean home to some of the greatest biodiversity of marine life around Koh Tao. The rock is visible as the dive boat approaches and extends down dozens of metres, making it appropriate for all levels of scuba diver. The site is so expansive, with a “secret pinnacle” to boot, that most operators will stay for two dives to make sure divers get a chance to take it all in. Due to waves, wind, and low visibility, most centres will not make the journey between the months of November – March. 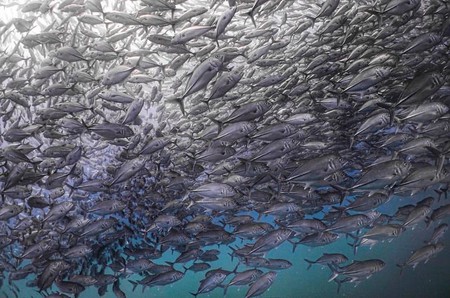 Sail Rock's moniker as "the best site in the Gulf" is well deserved, boasting a huge abundance of marine life | © Roctopus Dive

Look out for: Clouds of swarming fusilier, queenfish and trevally on the hunt, if you’re lucky – a whale shark.

A closer alternative to Sail Rock, Chumphon Pinnacle is just a quick journey to the northwest of the island and packed with the same kind of activity and energy as its big brother to the south. The pinnacle isn’t visible from the surface, making it ideal for divers comfortable with deeper descents. Your resolve will be rewarded, however! Chumphon Pinnacle is the most popular local site to have a chance encounter with the very elusive whale shark. 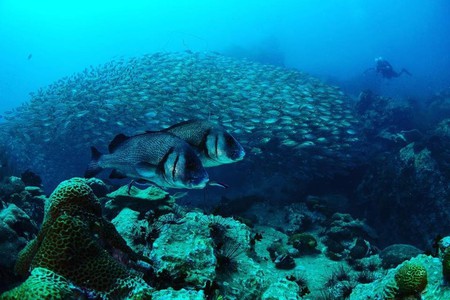 Look out for: Giant groupers the size of people, stealthy sting rays, if you’re lucky – a whale shark.

Jutting up through the water column about 15 kilometres south of the island, this stunning pinnacle is alive with activity nearly year-round. The main part of the site is accessible to all levels of scuba diver, while advanced divers rated to dive to 30 metres can explore its nearby “secret pinnacle,” encountering huge schools of fish and the occasional hidden surprise. Like Sail Rock, this site’s accessibility is seasonal. 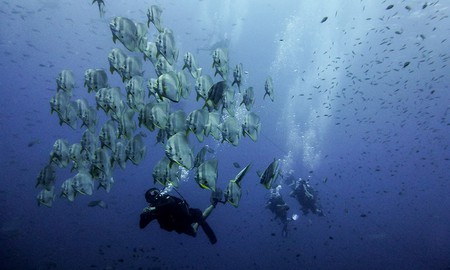 A school of batfish on the move at Chumphon Pinnacle | © Steve Kyrou / instagram.com/steve.k_underwater

Best for: Scuba and snorkeling

Look out for: Rainbow-coloured parrotfish, the occasional turtle, and if you’re lucky – a whale shark.

Named for its jutting appearance, like a shark fin breaching the water’s surface, Shark Island is one of the more unique underwater areas of Koh Tao. While most sites enjoy near swimming pool like conditions, Shark Island is the one spot divers can experience a bit of current, which creates an entirely different underwater environment brimming with swaying soft corals and hungry reef-feeders. The island also has a beautiful protected cove, perfect for snorkeling without worrying about any current. While only accessible by boat, more intrepid snorkelers can also kayak from the nearby Koh Tao shoreline. 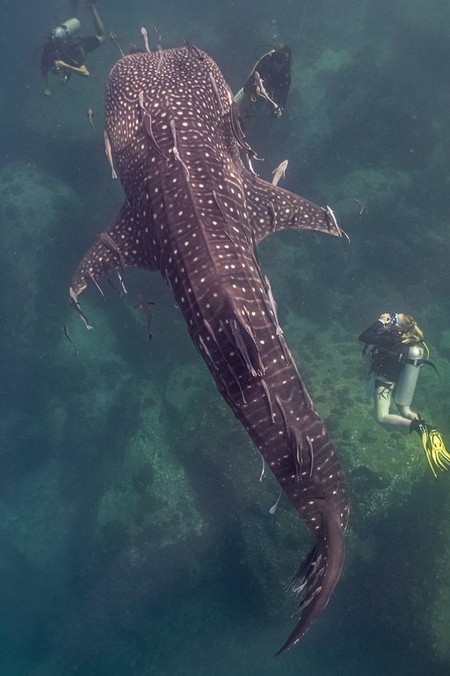 Visit Koh Tao between January and July for your best shot at swimming with these magical creatures | © New Heaven Reef Conservation Program / facebook.com/NHRCP

Look out for: Colourful reef fish, curious pufferfish, and cliff jumpers from above.

Tanote Bay is one of Koh Tao’s most beautiful beaches, easily accessible by either land or boat. The sheltered bay leads out onto a beautiful reef almost immediately off the shoreline, gaining depth more swiftly than other areas of the island. Between snorkeling, turn up your adrenaline by climbing up the bay’s signature rock and leap into the deep waters below from jumps of about nine or 12 metres. 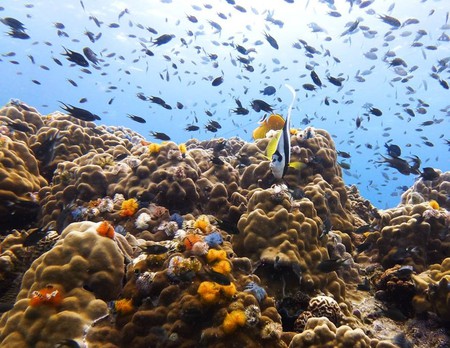 Best for: Scuba and Snorkeling

Tucked in the rugged eastern shore of Koh Tao, Liam Thien is like an underwater playground for scuba divers, with ancient volcanic boulders strewn underwater creating some impressive and entertaining swim-throughs for much exploration. Snorkelers can access the site by boat or by hiking across the island through the jungle along a worn down road that once accessed a now abandoned resort. The site also features some great cliff-jumping, starting with a more modest three-metre jump before graduating to nine and 12-metre leaps. 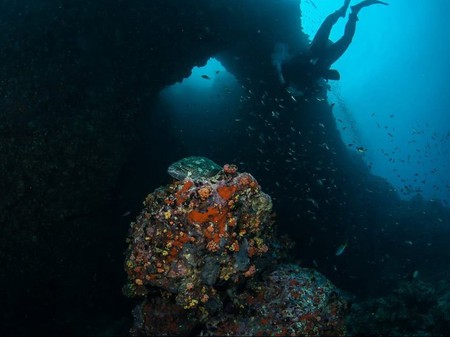 Look out for: Lots of turtles and sharks.

This bay to the south of the island was hardest hit by the global 2011 coral-bleaching event. While much of the natural reef is still in recovery, the site has become a magnet for the island’s population of green sea turtles and blacktip reef sharks. Snorkelers can swim right off the beach or access the bay by boat to have the chance to swim with these magnificent creatures, and during certain times of the year the bay is flush with baby sharks! 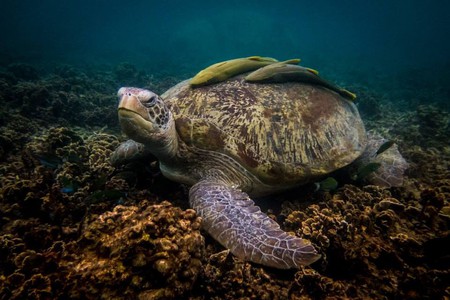 Turtles tend to avoid busy dive sites with lots of boat traffic, so for a near-guaranteed encounter, head over to snorkel in Shark Bay | © New Heaven Reef Conservation Program / facebook.com/NHRCP

Best for: Scuba or Snorkeling

Gently sloping out from the beach, Aow Leuk Bay has beautiful coastal reefs along both its edges extending as far as you can swim. Along with its rich biodiversity of marine life, the general good health of the bay has earned it the distinction as a prime location for local conservationists to set up artificial reefs and nurseries, including the island’s active electrified-reef project to stimulate coral growth. During certain times of the year it’s also possible to swim with baby black-tip reef sharks in the shallows – usually within just one metre of the surface. 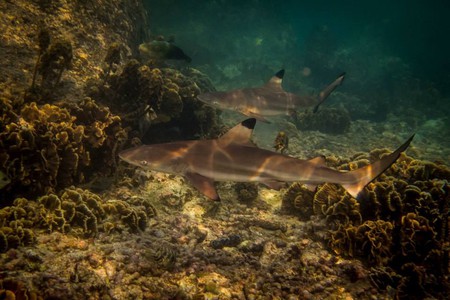 During certain times of the year, snorkelers can swim with baby black-tip reef sharks in the shallows of many bays. Don't worry, they're not dangerous! | © New Heaven Reef Conservation Program / facebook.com/NHRCP

Look out for: More sting rays than you can count, curious moray eels poking their heads out of crevices, hungry hawksbill turtles munching away.

The largest dive site on Koh Tao, White Rock’s expansive reef extends out from its signature rock, dropping off towards deep canyons to the south and scattered coral bommies to the north. Its location and changing topography earns it some of the best biodiversity around the island – divers have the potential to see almost anything the island’s marine world has to offer. Its large population of nocturnal sting rays make it one of the most popular night dive locations as well. 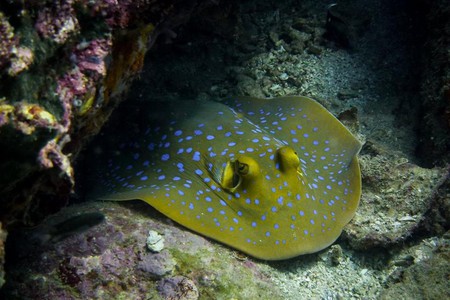 White Rock is one of the most biodiverse areas on the island, and an especially good site for spotting sting rays like this blue-spotted ribbontail ray | © Roctopus Dive

Best for: Scuba or snorkeling

Look out for: Reef fish of every colour, eye-catching (and extremely rare) giant clams, and curious pufferfish.

One of the several beautiful bays enclosed by Koh Nang Yuan, Koh Tao’s sister island, this site is named for its incredible hard coral reminiscent of Japan’s famous royal gardens. Reportedly, the site has more biodiversity of coral species than anywhere in the world for an area of its size, which itself attracts a wealth of interesting marine life. Snorkelers can enjoy a huge shallow area that extends along both coastlines, while divers can continue deeper, checking out the site’s enormous artificial reef and two cave-like swim-throughs. 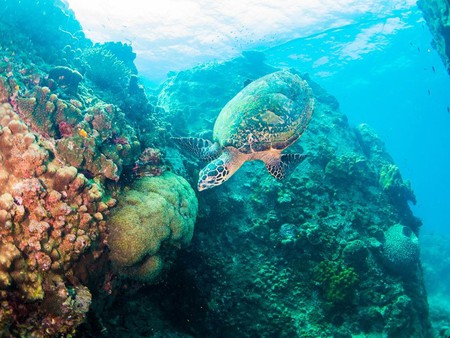 Look out for: Massive groupers and trout, Jenkins’ stingray sometimes hidden beneath the ship, and abundant schools of snapper.

This de-commissioned World War II US Navy vessel was gifted to the Thai government several years ago to intentionally sink as an artificial reef and dive-training site. Sat in the muck at 30 metres, in its seven years underwater, the ship has already become a bustling ocean city of its own. Coral has encrusted over much of the exposed metal, and divers can peer inside the barred windows to see massive groupers and trout moseying between cabins. Its depth restricts this site to advanced divers only, and training is available island-wide to learn to safely venture inside the sunken wreck. 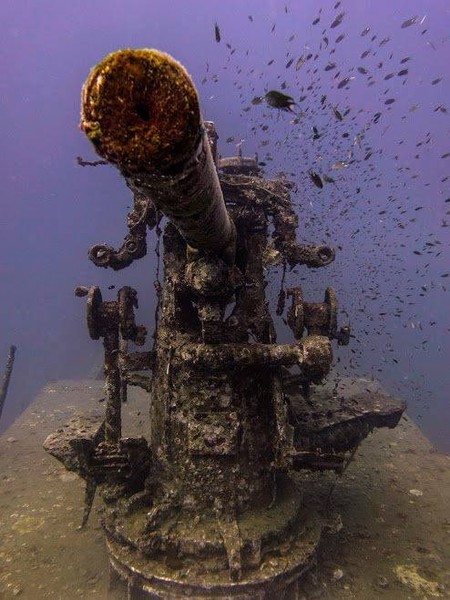 The HTMS Sattakut is a WWII US Navy vessel gifted to the Thai government to intentionally sink as an artificial reef an training site. It lies at 30 metres underwater just minutes off Koh Tao | © Lee Jellyman / @jellyman_underwater
Give us feedback