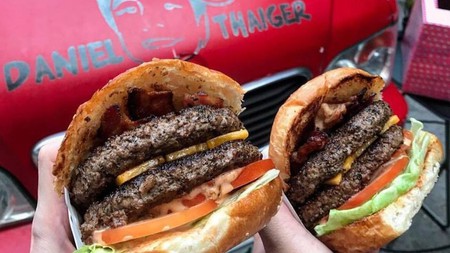 Thai food is one of the most delicious cuisines out there, but when the craving strikes for a good burger, Bangkok does not disappoint. From no-frills patties to the most gourmet burgers imaginable, check out these mouthwatering spots. 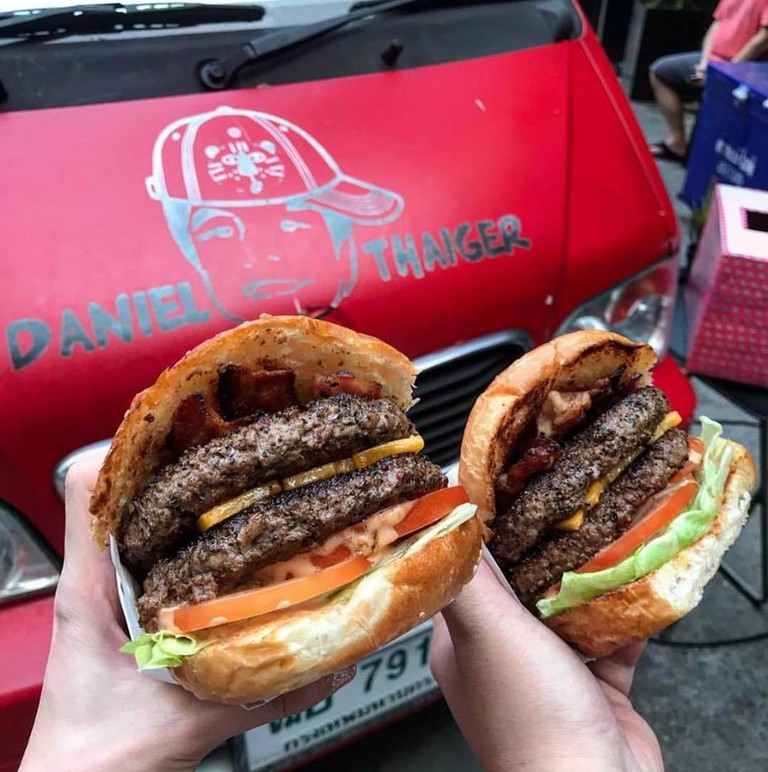 These “West Coast-style” gourmet burgers have perched comfortably at the top of “best burger” lists for years, with a choice of beef or pork patties drenched in sauces like teriyaki, spicy mayo, barbecue, or its signature Thaiger sauce. The chef, Mark Falcioni, is a LA native who began cruising the signature red truck around Sukhumvit in 2013, quickly establishing a reputation and selling out his stock nearly every night. In 2016, Falcioni expanded his burger empire to include a permanent stand on Sukhumvit Soi 11, but the truck is still as active as ever. Hungry roamers can follow its schedule on Facebook. 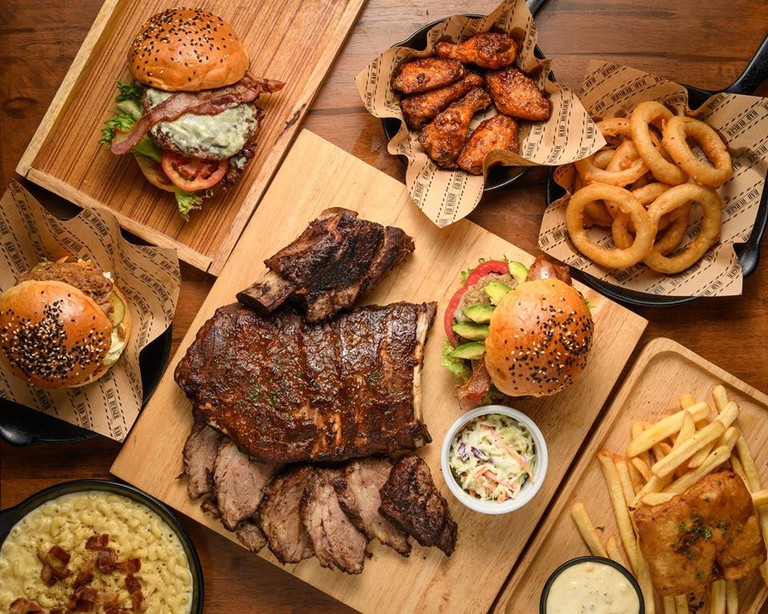 Come for the burgers, stay for the selection. | © Bad Burger

Chef Poupée already has an impressive resume working in some of Bangkok’s top kitchens, and at just 27 years old, launched this burger joint serving up gourmet options all made in-house from scratch. Its signature burger is The Baddest, an artistic creation of chargrilled Angus beef with bacon, onion rings, Bearnaise sauce, and Gruyere cheese. To celebrate the city’s first scheduled Pride Parade, Bad Burger currently serves its burgers on optional rainbow buns for the ultimate Instagrammable feast. 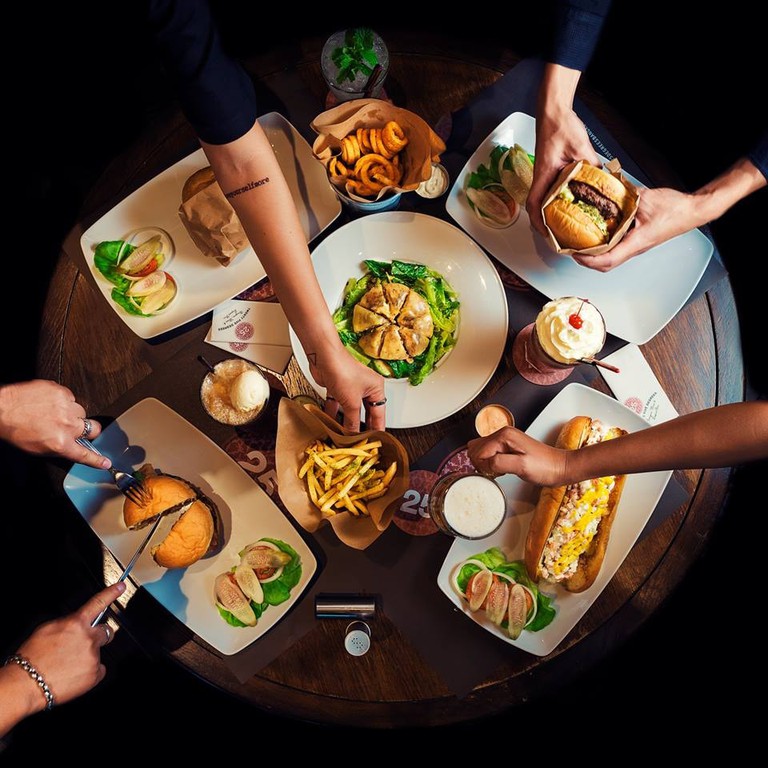 Design your burger however you'd like, at any hour. | © 25 Degrees Bangkok

Love customisation? Look no further than the Bangkok branch of this US chain for the city’s best build-your-own burger menu. Pick from options of patties like ground sirloin, turkey, Kurobuta, yellowfin tuna, or veggie and from there, craft your signature palette with any add-ons you desire, like jalapeno bacon or caramelized onions. Then deck it out with your choice of 12 varieties of cheese and 15 kinds of sauce. It’s also open 24-hours a day to satisfy your burger cravings at any hour. 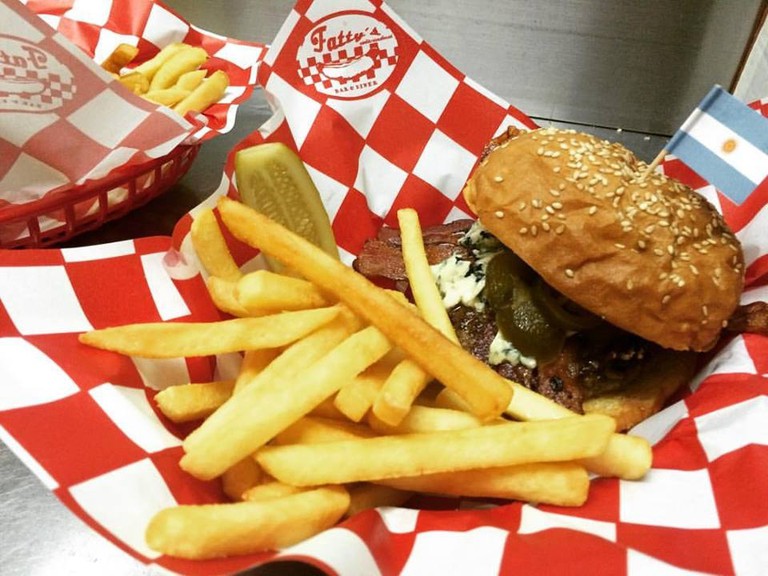 One of Fatty's top-sellers, the "CTT Aka Count the Thief Burger," named after the famous Bangkok-based progressive indie rock band | © Fatty's Bar & Diner

Channeling the vibe of an American dive bar, this joint offers some of the best of pub grub around. Its burger menu features classic staples along with some creative spins, like the Cream Cheese Burger or its Patti Melt. The owner hails from Wisconsin, the cheese capital of the US, so diners can expect the highest-quality imports from America’s Dairyland. 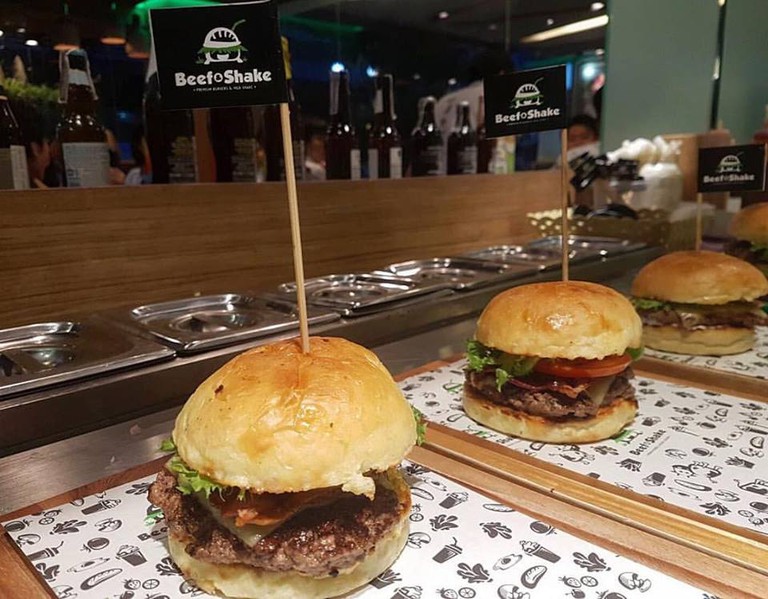 Disillusioned by the gourmet burger trend that’s hit Bangkok? Try out Beef & Shake for no-frills burgers made from premium, grass-fed Australian beef, with refreshingly simple options limited to “with cheese,” “with bacon,” or “double beef.” Vegetarians can get relief from the so-so bean patties popular around Bangkok burger joints and grab a crispy portobello mushroom burger.

This Thonglor haunt rose quickly in popularity because of its incredible decor and creative cocktail menu to match. The interior is dark and moody, with mazes of staircases that lead nowhere, secret doors, and enchanting knick-knacks strewn about the factory-like space. Its food menu revolves around one item: the burger. Delicately constructed with either Australian beef or fish and stabbed with a steak knife, the signature dish is then served with a portion of steak fries. 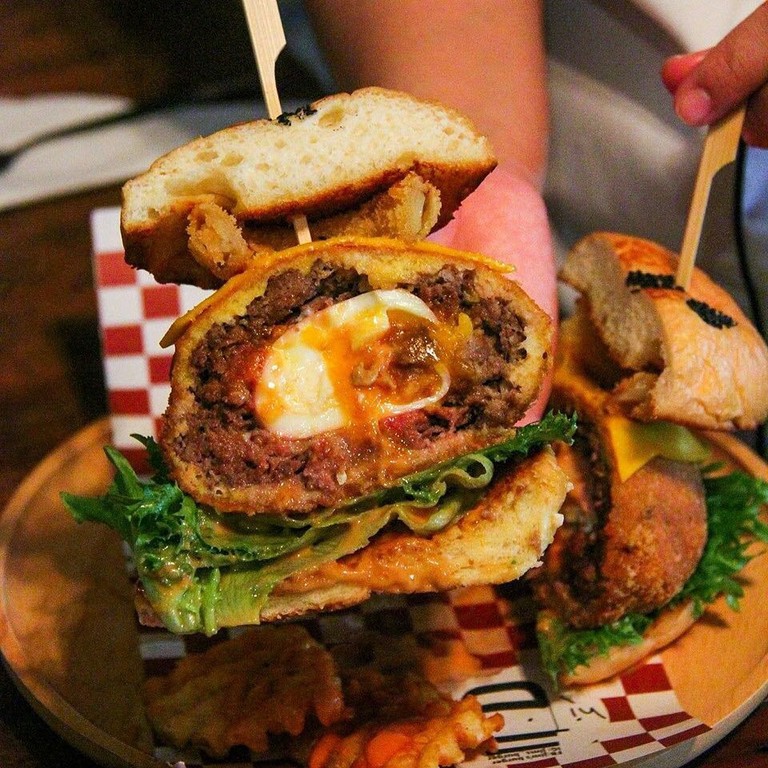 This Ari hangout is popular for its rotating range of craft beers both on draft and by-the-bottle, but its burgers live up to the hype as well. Its patties are undeniably unique, made with ingredients like curry powder, milk, cheese, and honey and served on either traditional or charcoal buns. 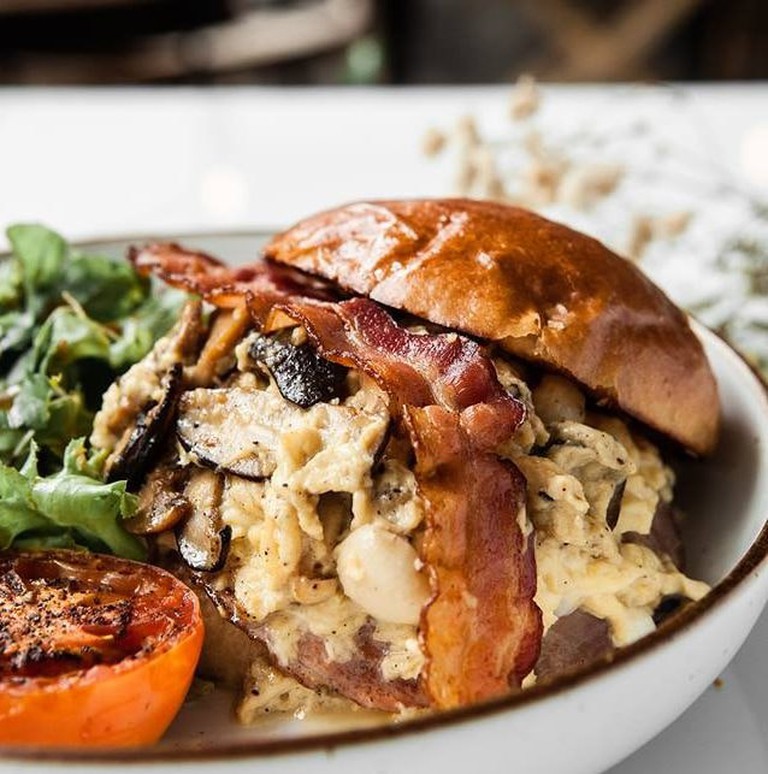 Whoever said you can‘t have a burger for breakfast? Chunky‘s menu accommodates for any hour. | © Chunky S23

The brainchild of several former members from Thailand’s national culinary team, this casual restaurant offers all of its burgers on house-made brioche buns and the culinary expertise in the kitchen doles out some creative dishes fit for any time of the day. Wake up with its Benedict Burger, combining poached eggs, Canadian Ham, and hollandaise sauce, or go straight for lunch with its signature sliced beef burger doused in house sauce that’s been simmering for three days.

Paper Butter and The Burger 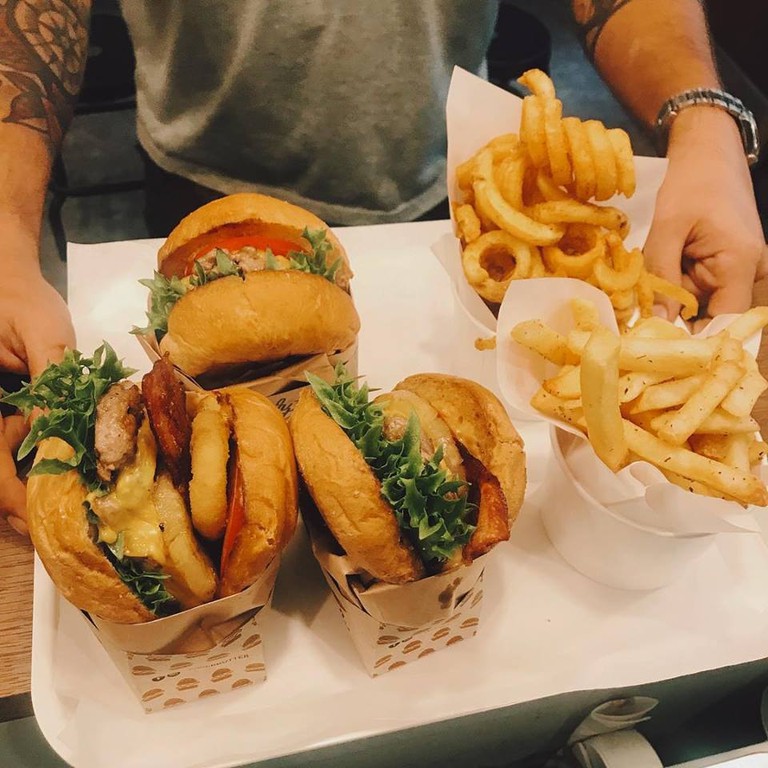 Dig into Paper Butter's uniquely Thai-styled burgers, fit with all the trimmings. | © Paper Butter and The Burger

Another great Ari hangout, Paper Butter brilliantly incorporates the tastes of Thai cuisine into its burger menu for when you’re craving both. Try the Chiang Mai Spicy with either pork or beef tucked among onion rings and cheddar cheese and a spicy Thai herb-infused mayo. All burgers can be ordered on a sourdough charcoal bun, Challah butter bun, whole wheat bun, or naked. 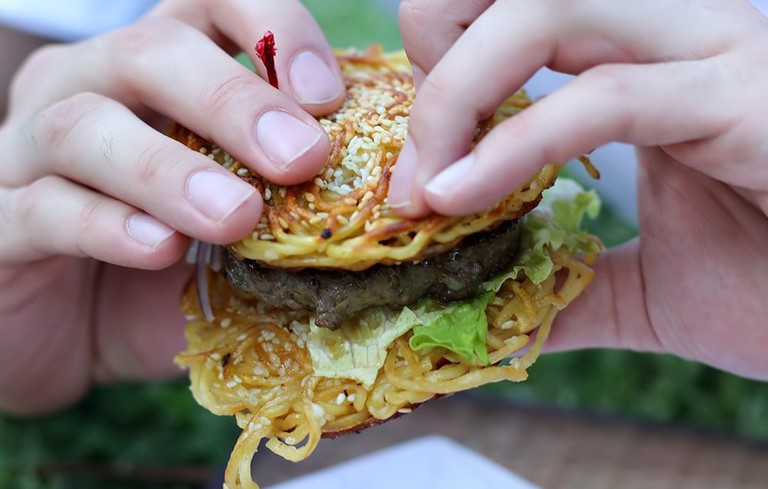 Itching to try the Ramen Burger that’s been an Instagram darling this past year? Order pork or beef patties paired with all the fixin’s and tucked neatly into two pan-fried ramen “buns.” The Japanese-style fusion burgers are then topped with perfectly paired sauces like teriyaki or spicy mayo.