Thailand’s shopping scene ranges the full spectrum from open-air street market stalls to sleek mega malls and knock-offs and international brand names, to collections created by the country’s most talented designers. Some of these designers have already gained worldwide recognition, with their brands carried by shops around the world; others are growing fast, poised to enter the global fashion scene soon. Here are ten Thai fashion designers you should know. 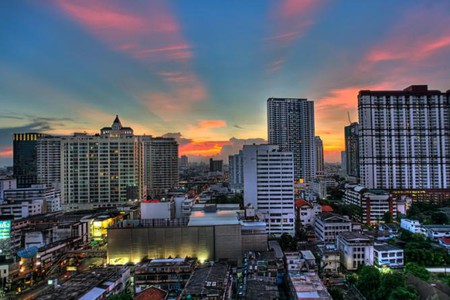 The designer behind the brand Kloset, Mollika Ruangkritya, finds inspiration from Thailand’s playful culture for her structured, yet feminine designs. Many of Ruangkritya’s designs have a vintage flare, including her latest collection When Mom Was Young, which incorporates aspects of 1970s “flower power” style. With no formal fashion design training or financial backing, Ruangkritya has worked hard over the past decade to prove that her brand is more than just a hobby. Kloset now has several stores in Thailand and Ruangkritya’s collections are carried by boutiques in Australia, Japan, England, Spain, and the US, among other countries.

Born in Bangkok, Koi Suwannagate’s designs are inspired by shapes and colours found in nature, which she describes as a “natural extension” of her Thai heritage. Suwannagate launched her first line in 2001 and received widespread praise for her New York Fashion Week debut in 2007. She was nominated for a prestigious Fashion Fund Award by Vogue, and was named one of the Top Ten Collections of the season by Women’s Wear Daily in 2009. Her collections have been featured in prominent fashion journals, including Elle, Vogue and Harper’s Bazaar, as well as worn by celebrities, such as Gwyneth Paltrow, Oprah Winfrey, and Natalie Portman. Now based in New York, her current line, Sole Estate, focuses on practical and feminine wardrobe essentials.

One of Thailand’s most experienced haute couture designers, Tipayaphong Poosanaphong began his career as a button sorter in Paris, eventually rising to work alongside Emanuel Ungaro. Poosanaphong’s line of men’s and women’s clothing is funky and detailed, frequently incorporating sequins, buttons, lace and bright colors. His men’s collections are classy yet creative, while his women’s collections are typically bold and sensual. Poosanaphong sews every stitch himself, and also offers bags, hats, and other accessories at his boutique in Bangkok.

Monrissa Leenutaphong is the designer behind two popular Thai brands, Skin On Skin and Monrissa Couture. Skin On Skin uses light, comfortable fabrics, such as silk, chiffon and satin, which are designed to feel like a second layer of skin, while the Monrissa Couture brand’s signatures styles include color block patterns and earth-toned pleats. Leenutaphong never studied fashion, but instead draws on her background in art to create original designs. In addition to her store in the Bangkok Art and Culture Center, Leenutaphong recently launched an art café in Bangkok called Café at Ease, a multi-purpose space that serves light meals, art, and her inventive clothing.

Disaya Sorakraikitikul’s eponymous collection, Disaya, is comprised of a youthful yet sophisticated, ready-to-wear clothing line and a quirky jewellery line. The years Sorakraikitikul spent studying fashion at the well-known Central Saint Martins College of Fashion and Design in London are visible in her designs, which blend British functionality with Thai intricacy. One of her dresses was worn by Amy Winehouse on the cover of her Back to Black album, and celebrities such as Kelly Osbourne, Agyness Deyn, and Jennifer Lopez have also worn her pieces. Ranging from flirty party dresses to more practical work-appropriate pieces, Sorakraikitikul’s collections are suitable for women of all ages.

Designer for the Thai label Senada, a brand that blends vintage looks with street style, Chanita Preechawitayakul is known for giving a more couture touch to familiar prints. Her past creations have incorporated the patterns of old tablecloths and vintage wallpapers, with her inspiration coming from items found in everyday life. She also frequently draws on the styles of different cultures around the world, using Thai patterns or Indian embroidery to create cutting-edge details. Elements of Preechawitayakul’s background in biochemistry are sometimes evident in her work, with animal or plant motifs occasionally appearing in her designs.

Tawn Chatchavalvong’s collections focus on elegant pieces that transition easily from day to night. Chatchavalvong worked as a PR consultant for several years before deciding to return to school to study fashion. After graduating from an Italian fashion design school, he worked alongside Thai designer Somchai Kaewthong, and some of his creations for the K and I brand were featured at Bangkok International Couture Fashion Week in 2011. Chatchavalvong went on to launch his own brand, Tawn C, in 2012. His collections combine simple silhouettes and chic lines, with designs inspired by his frequent travels. Chatchavalvong’s work has appeared in a number of leading fashion journals, including Harper’s Bazaar.

With over two decades of experience in fashion, Chanachai Jareeyathana continues to be a leader in his field. His talent was recognised early when he was nominated for a Young Designer of the Year Award while studying at Silpakorn University, one of Thailand’s most renowned art institutions. His brands 27 Friday and 27 November are popular with men and women alike. His men’s collections are stylish and structured, while his women’s collections feature bold prints and often incorporate lace. Intricate details and distinctive prints are Jareeyathana’s signature style. One of his most well-known collections to date remains Rattanakosin Era, which embraced his heritage by exploring “the look of Thainess” throughout history.

Kwankao Savetavimala’s brand is composed of simple wardrobe basics with a creative edge, described by the designer as “Chic. Chill. Cool.” Her collections are designed to be easily mixed-and-matched, blurring the line between work and play. Savetavimala began her career as a DJ, TV show host and actress, designing clothing for her friends as a hobby. She eventually launched her eponymous label, KWANKAO, in 2011, and in a few years the brand already has several stores in Thailand, in addition to receiving online orders from all over the world. Her latest collection, Once Upon a Dream, is influenced by the Aboriginal art and culture she encountered on a recent trip to Australia.

Pim Sukhahuta’s brand, Sretsis, takes its name from the three sisters behind it. The brand’s name is “sisters” spelled backwards and along with her two siblings, Sukhahuta has been making an impact on the international fashion scene for more than 10 years. Her collections are known for their whimsical prints and incorporation of more formal fabrics, such as silk, satin, and chiffon, into everyday-wear pieces. Sukhahuta’s creations have been worn by celebrities, including Zooey Deschanel, Beyonce Knowles, and Rachel Bilson, as well as featured in leading fashion publications, such as Elle and Instyle.