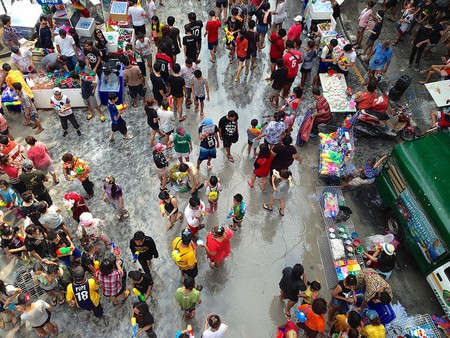 After a government official urged women to dress modestly at this year’s Songkran festival to prevent sexual harassment, a Thai-American model has decided to speak up and take a stand for womenkind.

When Cindy Sirinya Bishop read that the director general of Thailand’s Department of Local Administration, Sutthipong Chulcharoen, was advising women to ‘dress appropriately’ to ensure their safety during this year’s Songkran, she knew she had to do something. As a survivor of sexual assault during the same celebrations when she was 17, Bishop was shocked by the victim-blaming subtext of Chulcharoen’s statement. She posted a video on Instagram expressing her distaste for his words and the sentiment behind them.

ของขึ้น ขอระบาย 😡 Women have the right to dress however we choose, as long as it’s not illegal. Sexual assault and harassment is never the woman’s fault! Tell men to keep their hands to themselves! #rant #basichumanrights #donttellmehowtodress #tellmentobehave

After receiving numerous comments on the post from women expressing similar frustrations and sharing their own sexual harassment stories, Bishop realised her potential to make a real difference. Adding the hashtags #DontTellMeHowToDress and #TellMenToRespect to her original caption, she inadvertently created a movement that is allowing women around the world to join her in taking a stand and making an impact.

Bishop explains to Culture Trip that she is not normally the type to ‘rant’ on social media, but that she was so angered by the article, she couldn’t remain silent: ‘I was hoping the article would issue stern warnings to men or suggest other precautionary ways for women to protect themselves,’ she says. ‘But no. It was literally an article saying “don’t dress sexy”. I was angry, and this prompted me to record the clip. I use social media for my work as a model and as a message for empowerment. I don’t usually go off.’

But ‘go off’ she did. While she didn’t expect the post to go viral, her message gained traction immediately and soon reached international news stations.

The Songkran festival is the Thai celebration of New Year and takes place every year on April 13-15. The event is marked by playful water fights, and is a date Thai people look forward to all year round. However, Songkran is plagued with incidents of sexual assault, with a 2016 survey finding that over half of female Songkran attendees experience harassment during the event.

Thailand outlawed sexual harassment in the workplace under the Labour Protection Act of 1998, but Bishop does not believe the law does enough: ‘There is a gap in terms of enforcement,’ she says. ‘The lack of enforcement on all levels, from the police to the court system, leads to a direct failure in protecting women. I intend to do something about it.’

Bishop has requested a meeting with UN Women, the UN organisation dedicated to gender equality and women’s empowerment, asking for their support in making a difference to women’s safety in her country. ‘Thailand is big on saving face,’ she explains. ‘If I can make a big enough wave, it will be good incentive for the country to do something about this issue.’

What started as a public display of anger has become a movement akin to #MeToo, and Bishop has become the voice of thousands. ‘I was the first voice,’ she tells us. ‘But I am thinking beyond myself now. The rage has been simmering for a lot of women here and now that’s it’s boiling to the surface we can finally make our voices heard. I want to turn Bangkok into a safe city for women and bring about some real change and a definite shift in attitude in Thailand.’