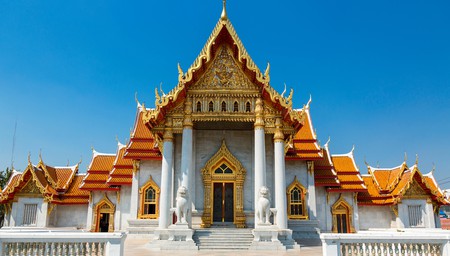 Thailand’s cultural and historical backgrounds have shaped it into a country filled with amazing contrasts, where diversity forms a coherent whole. We explore the religious art of Thailand’s Buddhist, Muslim, Hindu and Christian groups and see how their respective temples, mosques and churches reflect the country’s rich heritage. Follow us on a journey through the art and architecture of four religions, from Bangkok to Chiang Mai. 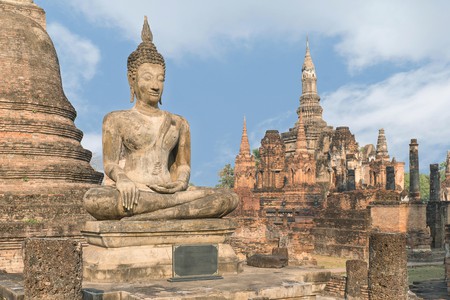 Thailand welcomes tourists from around the world, and demonstrates its diversity through culture, art and nature. However, when tourists see the country’s beautiful, glowing temples, they immediately connect Thailand with Buddhism. Of course, around 95% of Thailand’s population is Buddhist, but there are still 5% who practice other religions and they have left their artistic footprints all over the country.

The four main religions – Buddhism, Islam, Christianity and Hinduism – can exist peacefully, because of the country’s tolerance and the continuing support from the monarchy, which has lasted for centuries. Moreover, there is no required state religion, but rather a state of religious freedom. Before Thailand’s establishment as a Kingdom, the country had already been influenced by its neighbors in a number of religious and cultural ways. The Khmer empire in the northeast, the Mons who settled in the east of modern-day Myanmar and in the centre of Thailand, and the Sri Vijaya Empire in the south of the Malay peninsula, were key players. All these empires, which were, already then, under the influence of India, brought their culture to the Thai people, who had originally come from southwestern China and settled in Thailand before building their first kingdom in Sukhothai. In the 10th century, there was already a kind of fusion between Theravada Buddhism and Hinduism, but the most significant impact came when the Khmer moved their political and economic centre from Angkor to Phnom Penh and many Cambodian officials migrated, bringing Hinduism to Thailand.

During the long development of temple art, Hindu elements were introduced into Thai iconography. As a result, some of the Hindu gods can be seen represented in Thai temples; examples include the four-armed Vishnu, the half-man half-bird Garuda, the eight-armed Shiva or the elephant-headed Ganesh. Though there is, to an extent, a belief in some of the Hindu gods in Thailand, the religion hasn’t affected the nation’s principal philosophies and theologies, which have always been closely related to Theravada Buddhism.

One of the most impressive Hindu temples in Thailand is the Sri Mariamman temple in Bangkok, also called Wat Khaek in the local language. This primarily Hindu temple is home to all the gods of the Hindu religion and reveals a detailed, colorful structure. 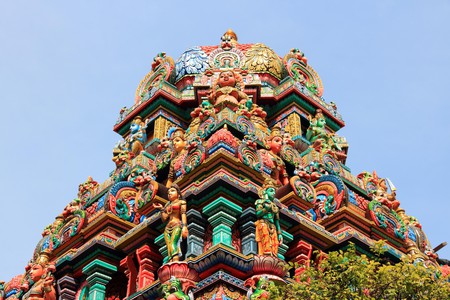 Despite influences from other religions, the art of Buddhism is omnipresent, and visible especially in the multitude of wats, or Buddhist temples and monasteries, across Thailand. Roof tiers, for example, are an important element of Thai temples. There is a color scheme typical for Bangkok temple roofs: orange, ochre, green, red and white. Gold also plays an important role. Applying it to constructions is very common and the basis upon which the impressive effect of tall Buddha statues or chedis, also known as stupas, is built. The origin of the chedi can be traced back to India, where it acted as a place to store relics; it has retained this original function to an extent, as its Buddhist counterpart is supposed to store the relics of Buddha. The most typical form, the bell shape, comes from Sri Lanka.

One of the most significant elements of the decoration of Thai temples is visible at the edge of the roof, at the gable ends. The serpent-shaped figures residing there evoke the Naga, a snake-like god from Indian mythology, which, in Thailand, appears as snake or dragon and is supposed to protect the temple’s treasures. Also serving as guardians, big Yaksha figures, or benevolent nature spirits, stand at portals of temples and prevent daemons from entering these holy places.

The second-largest religious group in Thailand are the Muslims. Their religion affects art especially through the mosques, which have no specific or typical style in Southeast Asia, but are influenced by Indian, Arab and Chinese designs. Importantly, there are two groups of Muslims in Thailand: the Malay Muslims who have a different ethnic culture in language, religious practice and costumes, and the Thai Muslims, who mostly live in central and northern Thailand. They share many similarities with Buddhist society and culture, except for their religious beliefs.

Islam was introduced to Thailand in the 13th century. People from India and Middle Eastern countries came here because of the area’s prospering trade, and to spread word of their own religion, although the Muslims living in Thailand’s southern provinces are indigenous inhabitants of the Malay peninsula. 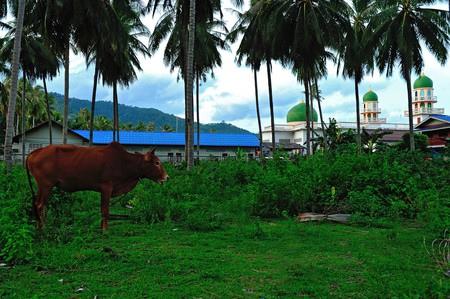 Despite their fundamentally different architectural structure and design, Thai mosques often reveal patters that can be traced back to Thai art. This is especially evident in the floral patterns, which are mixed with the Islamic representations of flowers and curves; moreover, a characteristic Thai ornament is the head of an animal arranged with flame patterns, which is similar to Persian woven rugs and carpets from India.

The art of Christian churches is, on the other hand, completely independent and takes little to no influence from Thailand. Christianity came to Thailand quite late, with the work of Portuguese missionaries, who arrived in the mid-16th century in the former capital Ayutthaya and brought the Catholic belief to Thailand. Later, at the beginning of the 19th century, Protestants settled in Bangkok, followed by American Baptists and Presbyterians a short while later.

It may be difficult to spot these Christian churches in Bangkok, but one comes directly into view during a boat trip along the Chao Phraya River: it is the Holy Rosary Church, or the Kalwar Church. It is thought that the images of Jesus Christ and the Virgin Mary inside the church were brought in by the Portuguese in the 16th century.

Another Catholic church, also located close to the river, gets attention because of its red-stone facade. The Assumption Church in Bangkok is the principal Roman Catholic church of Thailand, situated near the Oriental Hotel and the French Embassy. The original building was completed by a French architect in 1821. During the 19th century, the church played an important role for Christian missionaries arriving in Bangkok. Around 1910, the church was reconstructed in the Romanesque style, which is especially eye-catching with the tall square towers flanking the main entrance. The interior is decorated with dramatic elements, all of which underline the high ceiling. 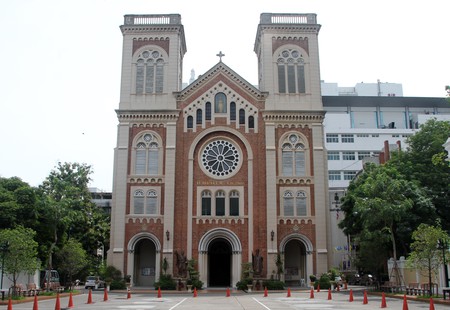 Related to the high percentage of Buddhists in Thailand, contemporary Thai art combines traditional Thai elements with modern techniques, and much of it still has a mostly religious background. As with temple architecture, some Hindu influences and symbols find their way into the canvases and onto the fabrics, but it’s harder to find elements of other religions in modern Thai art.

The temples, mosques and churches of Bangkok, however, offer an astounding insight into the complex history of a country whose art and architecture has been shaped by a multitude of cultures and peoples.