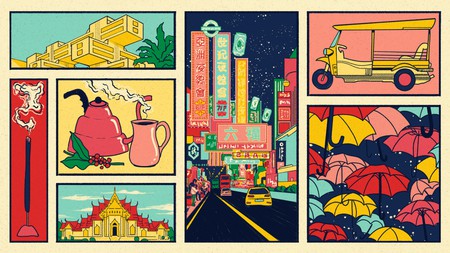 The delicious cuisine, buzzing nightlife and serene temples are just a few of the reasons why travellers come to Bangkok. But there’s more to the city than that and, according to the people who live there, many more reasons to love it. Here, five Bangkokians explain what makes their city so darn great.

Bangkok is a city where your attention is scattered by a million things. For some, this might be too much. Yet for those who stick around, you’ll learn how to relax into the hubbub and pick out the beauty in the chaos: the elderly woman who gets up at dawn to chant prayers for world peace; the motorcycle taxi driver who cuts through the rush hour traffic with an expression of complete zen, or the way awnings are pulled out and plastic raincoats are donned the instant a drop of rain falls.

It may take a few weeks, years, or even a lifetime to pick out these beautiful snippets of Bangkok life. To put you on the right path, here are five reasons to love Bangkok that you might not have considered, according to five people who live there.

“I’ve probably been to all the neighbourhoods in Bangkok. And one of my favourites is Yaowarat,” says artist Pairoj Pichetmetakul. “I love going to see the lives and traditions around here. In the afternoon, you see older people go about their routines at the Chinese temples – praying, chanting, lighting incense. But stick around until nightfall and that’s when the whole neighbourhood turns into a busy food market. Bangkok is a city that gives you energy. You go to Paris or London, and everything is closed after 8pm. Here, you have a city that never sleeps. It’s like you have two versions of Bangkok – daytime and nighttime.”

“Bangkok just grew without a solid city plan and kept expanding organically layer after layer, following the way people live – who come from almost all walks of life,” says architect Nuttapol Techopitch. “I’ve always been interested in places where people come and spend time together. In general, Bangkokians love going to malls because there’s AC and they cater to most people’s needs. The Commons is a great example of a community mall that also doubles as a public space where people can hang out.”

“Red Diamond takes coffee seriously; they stock over a 100 different beans, roast all their coffee in-house, and even monitor the pH levels of the water,” says Rujiyatorn Siriwan, owner of Porcupine Café. “But it’s not just them. There are so many more cafés to choose from these days. The competition is really high, and more and more owners are sourcing their coffee beans from the farms themselves – which is interesting because just five years ago it was nothing like this. Having said that, the ‘Es Yen’ (Thai-styled iced espresso with condensed milk) still has its place in many fancy cafés – it’s too popular to take off menus. I also love Yest Works in Asoke, which is a smaller café on Soi Sukhumvit.”

“If I were going out? If not Suan Phlu – an up-and-coming neighbourhood south of Lumpini Park – I would go for the Nana area in the old town; it’s a neighbourhood filled with these 20th-century, three-storey building blocks with gates around the windows. They’re called ‘shophouses’, and recently a lot of bars have taken them over,” says Passapong Phetpradit, owner of Junker and Bar. “There’s a certain charm about them – they have this mix of historic and new. My top two picks in Nana would either be Asia Today or Ba Hao.”

The underground music scene is thriving

“International acts are playing in Bangkok at record numbers – so many that people have gone broke trying to catch all these bands,” says Montipa Virojpan, editor of music magazine Fungjaizine. “From all the emerging local indie bands, DOGWHINE is probably the one to watch right now; it’s like King Krule meets Iceage. De Commune is probably the place that you can catch all the latest bands, now that Play Yard is closed. Another place to be is NOMA BKK, which occupies the place that used to be the much-loved Cosmic Café.”