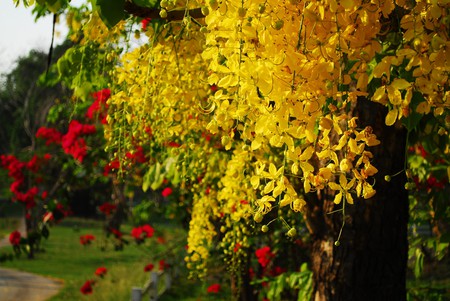 As Indonesia has the Moon Orchid, Singapore has the Vanda Miss Joaquim, and Laos has the Dok Champa, Thailand has the Ratchaphruek. Read on to learn more about Thailand’s pretty national flower.

The ratchaphruek was only named as Thailand’s national flower in October 2001. Previously, there had been no such symbol officially associated with the Land of Smiles. The elephant was named as the national animal and the Thai pavilion was listed as the national architectural feature at the same time. 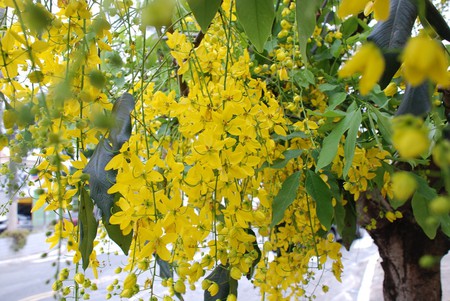 The tree grows in many countries

Although Thailand chose the ratchaphruek as its national flower, and the tree can be seen in many places around the nation, it also flourishes in several other countries across Asia, including Pakistan, India, Sri Lanka, and Myanmar.

Other names of Thailand’s national flower

Known locally as the ratchaphruek, the official botanical name of the tree bearing Thailand’s national flower is the Cassia Fistula Linn. The tree might also be called the chaiyaphruek and the actual flower may be referred to as dok koon. The tree is also known as the Golden Shower / Rain Tree because of the vibrant yellow hues of the flowers and the fact that they grow in clusters that seem to tumble from the tree like raindrops.

The name ratchaphruek means a royal tree. Each day of the week has a colour connected to it – the King was born on a Monday, and Monday’s colour is yellow. Therefore, yellow is the colour most associated with the much-loved and respected late King Bhumibol Adulyadej.

Other significance of the ratchaphruek’s colour

Part of the reason the ratchaphruek was chosen as Thailand’s national flower is its bold yellow colour. Yellow is associated with Buddhism, the country’s majority religion. Yellow is also seen as the colour of glory, harmony, and unity. 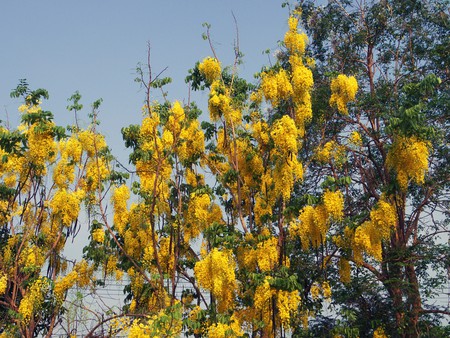 The ratchaphruek is the state flower of India’s state of Kerala. The local Malayali people place great significance on the flower and the flowers are used in sacred rituals during the state’s Vishnu Festival. The tree is mentioned in ancient Tamil texts. In Laos, the ratchaphruek flower is associated with the Laotian New Year. Flowers are hung in people’s homes to attract good fortunes and given as offerings in the temples.

Use on postage stamps

India once featured the ratchaphruek flower on a 20-rupee stamp. Additionally, in 2003, the flower appeared on a Canadian 48-cent stamp to commemorate an international philatelic exhibition held in Thailand’s capital of Bangkok.

Importance of the ratchaphruek in Ayurvedic medicine

It’s rather telling that the ratchaphruek is known as ‘disease killer’ in traditional Ayurvedic medicine. Mentioned in ancient Ayurvedic texts, the fruit is said to have laxative properties. Ayurvedic systems do not advocate the use of the tree in herbal remedies without consulting a herbalist first.

It usually blooms in the hot season

In Thailand, roadsides are often awash in yellow hues between February and May. The ratchaphruek’s flowers start to open at the end of Thailand’s cool season, remaining open throughout the hottest months. 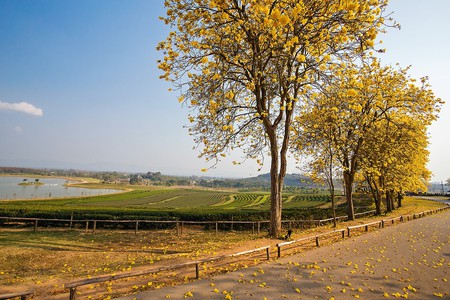 The tree has either leaves or flowers

You won’t find a ratchaphruek tree with both leaves and blossoms; as the flowers bloom, the leaves drop! This makes the striking yellow hues stand out even more.

Various species of bee and butterfly feed from the ratchaphruek; it is especially loved by the tropical carpenter bee. Humans cannot eat the fruit, but it is enjoyed by another mammal: the golden jackal. The wild dog feasts on the tree’s fruits and is also thought to play a beneficial role when it comes to spreading the seeds.