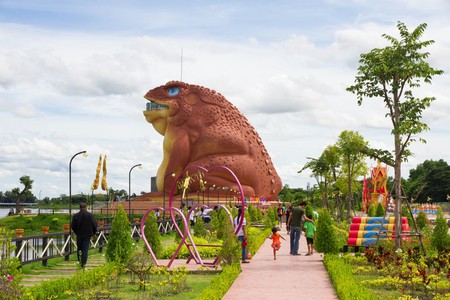 The small but cute Phaya Thaen Public Park in Yasothon ... with a gigantic toad! | © i am way / Shutterstock

The riverside park of Phaya Thaen Public Park is famous for its gigantic five-storey toad statue. The mammoth amphibian looks out over the water, his back covered with warts and his mouth gaping. It’s not just an unusual sight however—you can even go inside the toad! 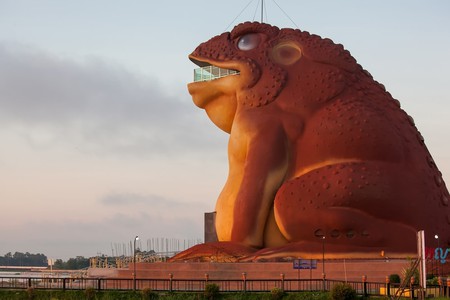 The toad’s belly contains displays related to tourism in the province and information about the legend of Praya Kankak, a local toad prince who bargained with the rain god to prevent the lands from being flooded. It is said that the toad prince and the rain god agreed from that point on, people should launch rockets to signify that they wish rain to come.

Each May, Phaya Thaen Public Park holds a booming Rocket Festival, known locally as Bun Bang Fai, where locals launch gigantic rockets into the skies, hoping for rain to follow. You’ll notice that some of the smaller statues feature rockets. The riverside park is also especially busy for Songkran, Loy Kratong, and yearly boat races. 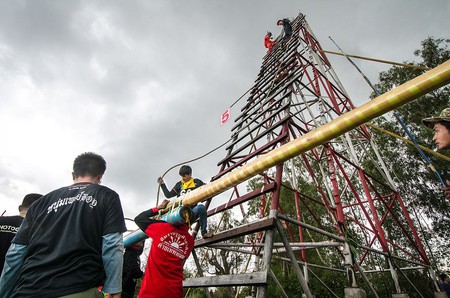 You can also go to a viewing platform right in the toad’s mouth for sweeping views of the surroundings. Don’t worry about climbing—there’s an elevator! See small fishing boats traversing the river and admire the small but pretty park next to the toad. 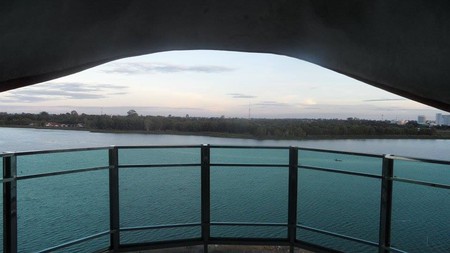 Behind the toad, there’s a replica of an ancient horse-drawn chariot, carrying a rocket. Statues of buffaloes, men playing musical instruments, and dancing ladies clad in traditional Thai dress complete the parade.

Phaya Thaen Public Park is also home to an enormous Naga statue, the golden mythical beast also looking out over the river. Local lore says that these snake-like creatures lurk in the waters of the Mekong River and its estuaries, and that these semi-divine beasts are also responsible for unusual water flow and waves in local rivers and lakes. 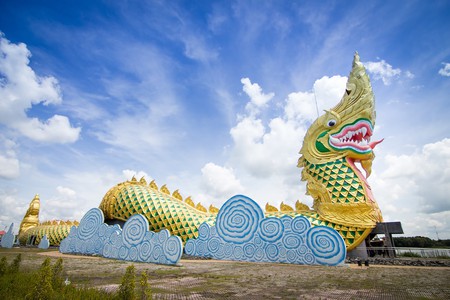 Step inside the scaly mythical beast and you’ll find a terrific 3D art display, great for taking fun pictures with a background of faraway lands, animals, and other scenes.

The small park has several seating areas, surrounded by flowers and trees, and there’s a selection of small restaurants and street food vendors to keep hunger and thirst at bay.

There is currently no admission charge for either the toad or the Naga. Easy to reach from Yasothon’s main provincial town, it’s a great side trip to add onto any trips around the region of Northeast Thailand. There certainly aren’t many other places around the Land of Smiles where you’ll come across a gigantic toad!