Northern vs. Southern Thailand: What are the differences? 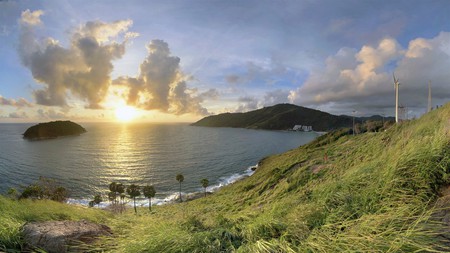 It is easy to lump the various regions of Thailand into one, however in doing so, you will miss being able to appreciate it in its entirety. The country is split up into a handful of areas, each with its own unique characteristics. Here are the best and most impressive qualities of the country’s northern and southern regions to help you decide which one to visit.

The food in Thailand is incredibly region-specific, so those craving a particular dish found or made in one region only may be disappointed when they venture elsewhere. From climate to culture and local customs, there are a number of factors that affect particular dishes, both how they are made and how they taste. Fret not, however, as there are plenty of amazing recipes that originate from all regions of the country. 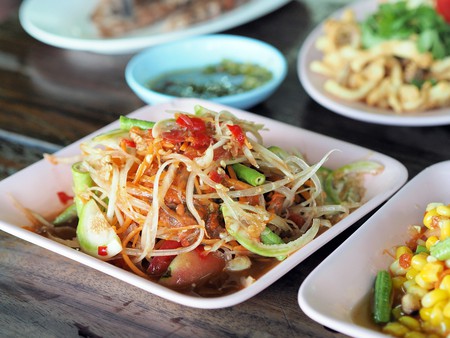 Northern Thai food is known as Lanna or Isaan, and it is unique in that it can only (almost) be found in Northern Thailand. Bangkok, being the big city it is, has a number of restaurants that try their best to recreate this unique cuisine, however, it is best eaten where it originated from.

A staple dish in the north of Thailand is steamed sticky rice, which is best eaten when paired with a red or green chili sauce for dipping. Visitors to this region will find an abundance of Northern Thailand-style dishes served with sticky rice, including one of the most popular, som tum (papaya salad). Visitors to the mountainous, landlocked north may be disappointed by the lack of seafood, as this region’s distance from Thailand’s coasts makes it difficult (and expensive) to get seafood. 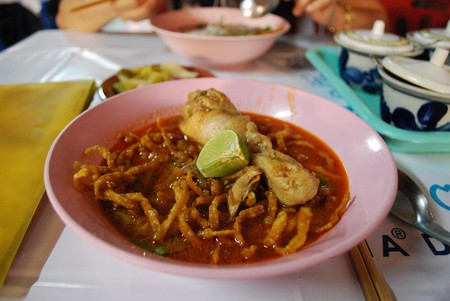 Seafood lovers will rejoice when heading to Southern Thailand. Seafood is abundantly available, being that much of the region is on the coast, including Bangkok. A large portion of the population work as fishermen as it is a great way to support themselves financially. The flavors in the south are a bit spicier and hotter than dishes in the north. Some of the most popular dishes visitors will find themselves devouring include gaeng tai pla (Southern Thai-style fish curry), khao yum (mixed rice and vegetables), and tom som pla krabok (sweet-and-sour fish soup). 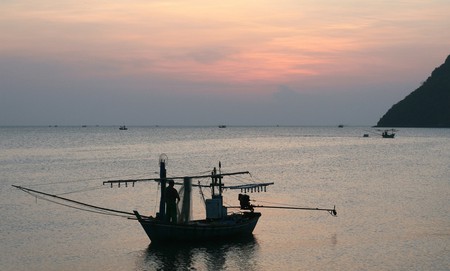 Seafood is plentiful in the coastal areas of Thailand | Pixabay

Those looking to travel off the beaten path should visit the north of Thailand. Some of the most thriving and interesting cities in the north include Chiang Mai, Pai, and Chiang Rai. Chiang Mai is well known for the abundance of temples found on almost every corner of the city. Often referred to as Thailand’s “capital of the north,” Chiang Mai is the most popular and flourishing northern city. Tourists have slowly started to catch on, and have made their way to this city to experience its charm firsthand, but it still remains less touristy than many southern cities.

Northwest of Chiang Mai is Pai. It is a bit smaller, yet just as chilled as its counterpart. Here visitors will find a plethora of bungalows to call home, as well as a strip of sorts equipped with a small night bazaar, restaurants, live music, and parties. An additional five hours’ journey north of Pai is Chiang Rai. The city is home to Wat Rong Khun, the glistening white temple that is one of the most famous Buddhist temples in the country. 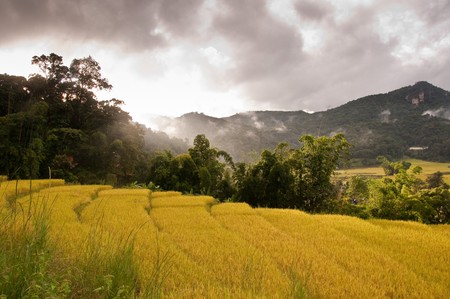 The south of Thailand is a boon to beach bums looking for nothing more than its stunning beaches to lounge on for the entirety of their trip. The Land of Smiles is home to some of the most awe-inspiring, beautiful beaches in the world. Which of these islands visitors opt to visit will most often come down to how busy or quiet they wish their stay to be.

Some of the most spectacular islands in the Andaman Sea include Phuket, Koh Phi Phi, Koh Lipe and Koh Lanta. The most popular Gulf of Thailand islands include Koh Samui, Koh Phangan and Koh Tao. Each one has different perks; for example, Koh Tao is best for those interested in diving, while Koh Phangan is best for those who want to party. 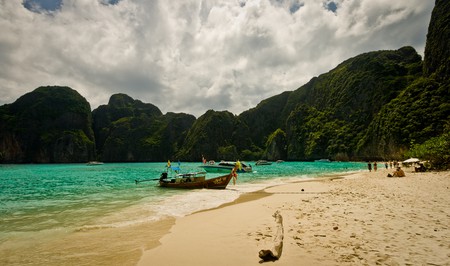 There is an airport in the Northern Thailand city of Chiang Mai that does have some international connections, making it one of the easiest cities to visit in this region. Otherwise, those visiting will have to rely almost solely on buses for transportation. The daredevils who wish to see the country at their own pace may want to invest in renting a motorcycle to explore the northern region’s most remote areas, however, it is a bit dangerous and riskier than simply hopping on a local bus. 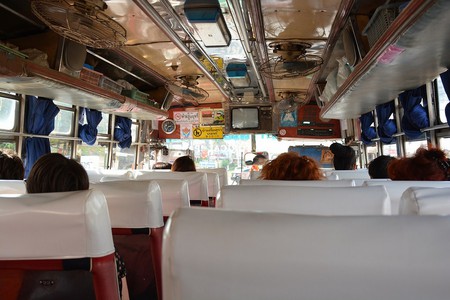 Some of the most popular airports in the south of Thailand can be found on the islands of Phuket and Koh Samui, as well as in Krabi. The airport in Koh Samui is best for those travelers hoping to stay in the Gulf of Thailand, but those flights tend to be more expensive than flights to Krabi or Phuket. 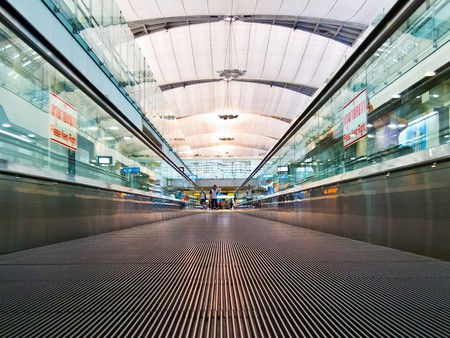 Northern Thailand is filled with cultural excursions, landmarks, and more. From glittering temples to untouched hill-tribe villages, this region has much to offer those who make the trek up there. Speaking of treks, this destination has many of ways visitors can get up close and personal with the luscious jungles and forests in Northern Thailand. In addition to treks, there are a number of ethical elephant sanctuaries worth visiting. 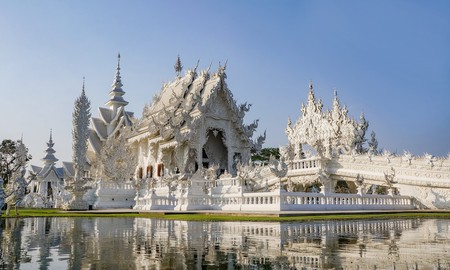 From private white-sand paradises to touristy, bikini-ridden resorts, the south of Thailand has an array of places to stay. Thailand’s islands were put on the travel itinerary map after Leonardo DiCaprio’s debut in The Beach, which did an excellent job of showing audiences just exactly what they were missing out on in this particular Southeast Asian country. Since then, tourists have flocked to the country’s plethora of islands in hopes of having their own beach paradise.

There are three major seasons to be aware of while traveling in Thailand. The cool and dry season is the best time to visit in terms of weather, but this is also when the Land of Smiles usually receives the biggest influx of tourists. Those visiting any time from November to February can expect the country to be a bit more crowded. Businesses often raise prices on everything from activities to accommodation during the high season. Also, Northern Thailand can get quite cold during this time of year, especially early in the morning and late at night. 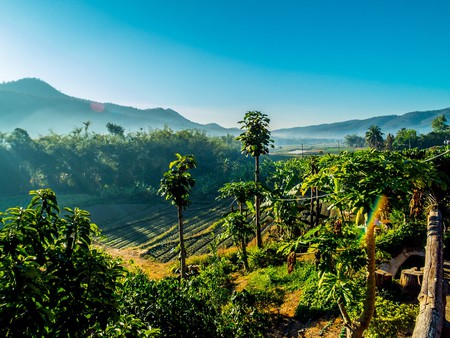 The hot season occurs from March through June, and while it is during this time Thailand hosts one of the most amazing festivals in the world, the oppressive heat is simply unbearable. Those visiting in the hot season should head straight for the coasts in the south of the country. The only way to beat the heat is to spend the entirety of this season at one of Thailand’s incredible beaches, completely submerged in the crystal-clear water. 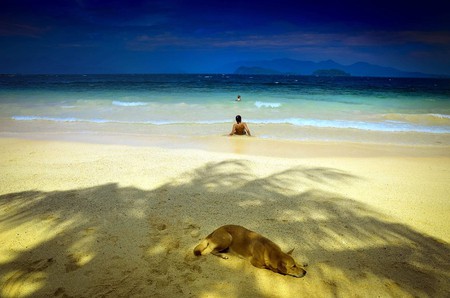 July through October is the rainy season. Southern Thailand gets significantly more rain than the north during this time, so avoiding it would be advisable.

The nightlife is certainly less overwhelming in the north of Thailand; for example, almost all of the bars in Chiang Mai close at midnight (except for a handful of rebel establishments that stay open until about 2 a.m.). Those looking for a detox, perhaps, might want to steer clear of the islands and stay up north. This does not mean that the north becomes a ghost town after dark, as there are restaurants, pubs, clubs, and night bazaars worth checking out after the sun goes down. 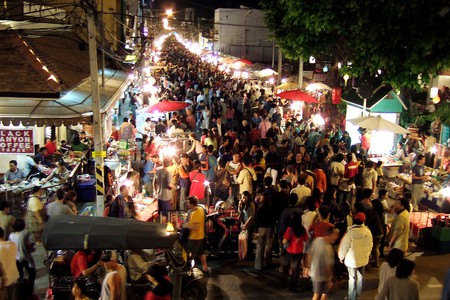 This is in stark contrast to those clubs and bars found in Southern Thailand. Those looking for a party should head toward the heavy-hitter islands, including Phuket, Koh Samui, and the infamous Koh Phangan, where the full-moon party is held every month. 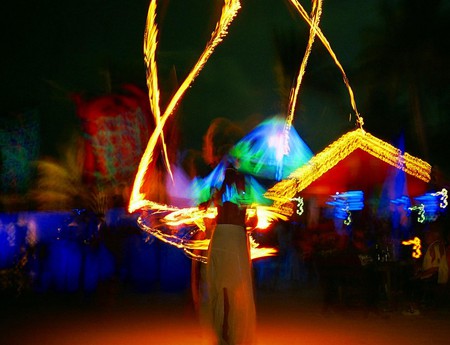 It may not be a concern for many visitors, but dengue does peak during the rainy season, especially in Northeastern Thailand. That being said, cases are reported around the country every year. According to the International Association for Medical Assistance to Travelers, the provinces in Thailand that reported the most cases of dengue included Maehongsorn, Bungkan, Songkla, Rayong, and Chiang Mai. 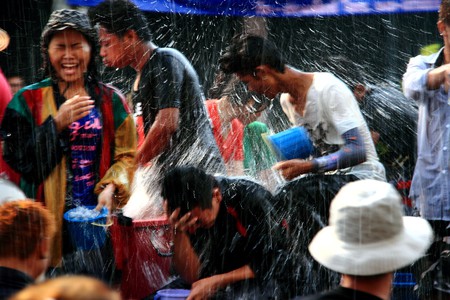 Those relying on a budget during their travels should head for Northern Thailand, as the cost of living is infinitely cheaper there. From the food to the accommodation, visitors will be pleasantly surprised at how much they save just by bypassing the more expensive south altogether. Even major cities, such as Chiang Mai, will be much more affordable than most busy cities in Southern Thailand.