Meet the Monk Making Buddhist Robes Out of Plastic 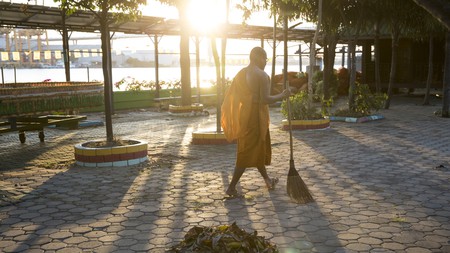 Phra Mahapranom Dhammalangkaro, abbot of Chak Deang Temple, sweeps the temple for leaves at the end of the day | © Luke Duggleby / Redux Pictures

Phra Mahapranom Dhammalangkaro is the acting abbot of Chak Daeng Temple just south of Bangkok. And he’s made it his mission to turn the city’s waste into robes for Buddhist monks. He now helps to process 10 tonnes of plastic waste every month. But like all big projects, his started off as a small idea – one that has a 2,600-year history.

“Since PET plastic can be made into fabric, I came up with the idea of making it into monastic robes,” says Phra Mahapranom Dhammalangkaro. He speaks at Chak Daeng Temple, located just south of Bangkok, where he works as the acting abbot. The sun hangs low in the sky, and the afternoon rays glance off the monk’s amber robes, a colour that represents Amitābha, the Buddha of eternal light. 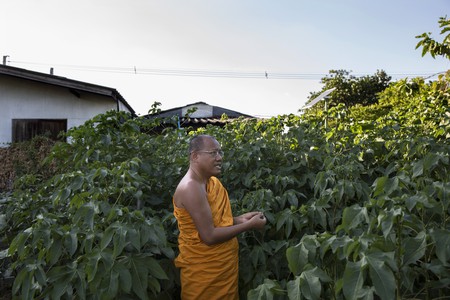 Phra Mahapranom Dhammalangaro, Abbot of Chak Deang Temple stands amongst cotton plants that he has grown, hoping to harvest the cotton from them to use. The aim of the temple is complete sustainability | © Luke Duggleby / Redux Pictures 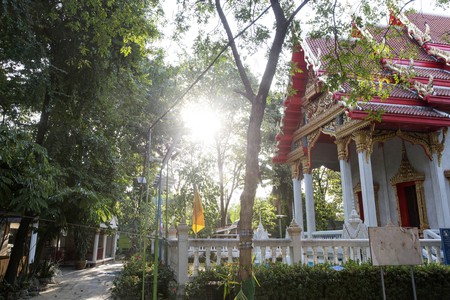 Transforming plastic into fabric may be a contemporary solution to the problems of the present day, but the idea of making monastic robes out of rubbish was first conceived 2,600 years ago by the Buddha, who encouraged ordained monks to fashion their robes out of cloth from scrap heaps and graveyards.

According to the Tripitaka (Buddhist scriptures), the material was boiled in water along with astringent bark to kill the germs and then dyed with fruit. “The Buddha did it this way,” Dhammalangkaro says. “But when it comes to plastics, why do people throw them away?”

In 2005, Phra Mahapranom Dhammalangkaro moved to Bangkok to teach Buddhism and manage Chak Daeng’s temple grounds. “It was full of garbage at the time,” he remembers. Plastic was dealt with in one of two ways: by burning it or throwing it away.

“Back then, people thought that when they threw garbage in the river, then it’s done,” Dhammalangkaro says. “But fish died, turtles died and dugongs died.” The other method was to burn them, but this created a lot of pollution. “We didn’t know what to do with them,” he says. “[Then] I learned that PET plastic can be made into fabric.” 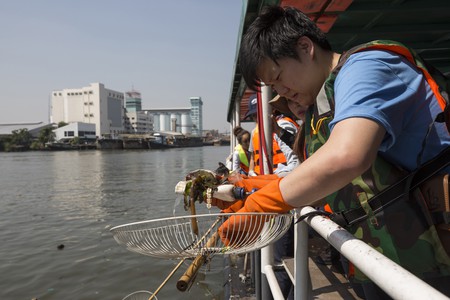 Volunteers take part in a river clean-up event organised by Chak Deang temple. Over 100 people descended on to boats and retrieve garbage from the Chao Praya River that flows next to the temple | © Luke Duggleby / Redux Pictures

“When we first started doing it, nobody believed it. There were people who did not know this could be possible.” Dhammalangkaro says. “That’s why we need to give them knowledge. When they have knowledge, they will know that it is easy to deal with plastic.”

Soon after their discovery, the monks announced that whoever wants to throw away plastic bottles could donate them to the temple. And so began Chak Daeng’s transformation from temple into recycling plant.

Temple workers would assemble the bottles and compress them into bales, before shipping them off to a factory to have them crushed and made into fibres. They would then be sent to a separate factory, where these fibres would then be made into fabric. Back at Chak Daeng, the fabrics would be transformed into monastic robes by the workers manning the sewing station. 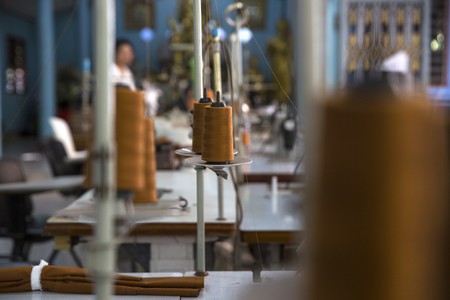 After having sent compressed plastic bottles to a factory to be recycled in to orange cloth and thread, a small team of women sow the material in to monks robes at the sowing centre inside the temple grounds | © Luke Duggleby / Redux Pictures 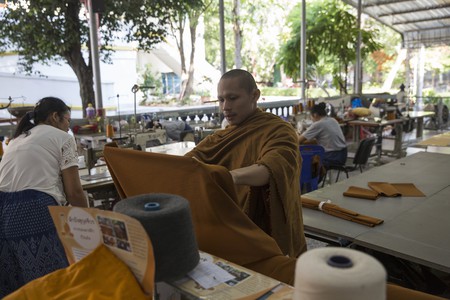 After having sent compressed plastic bottles to a factory to be recycled in to orange cloth, a small team of women sow the material in to monks robes at the sowing centre inside the temple grounds. Here a monk inspects the material. | © Luke Duggleby / Redux Pictures

There are around 30 villagers working at the temple. Together they transform around 10 tonnes of plastic each month. Of course, one monk can only wear so many robes. So the temple has had to learn other recycling methods: they transform foams into glue to make shoes; others mix foams with cement to produce plant pots and worm bricks; and another station makes buoys to collect garbage from the rivers. 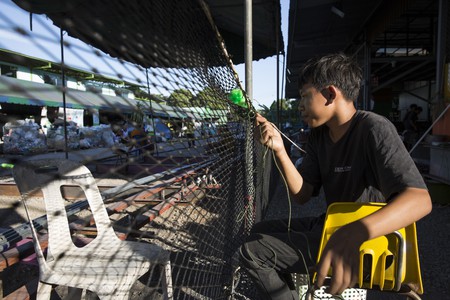 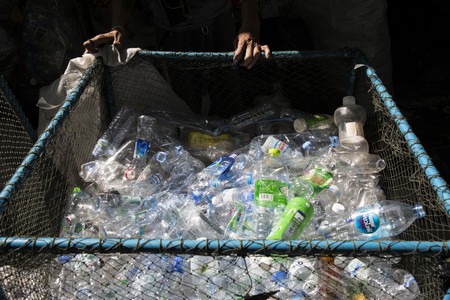 At the recycling centre, located in the grounds of the temple, over 10 tonnes of plastic bottles are sent and delivered each month | © Luke Duggleby / Redux Pictures

“Thailand is the sixth largest source of plastic pollution in the world,” Dhammalangkaro notes. And much of it ends up in the surrounding seas. The Thai government has asked fishermen to help, which sparked an idea.

“If we collect garbage by hand, we only get a little. But now we come up with the idea that they can be collected with fishing nets.” Every year in December, the temple hosts a Big Cleaning Day, an event where people help to pick up trash from the Chao Phraya River. “It’s impossible to work alone,” Dhammalangkaro says. “There needs to be unity. Everybody needs to join hands.” 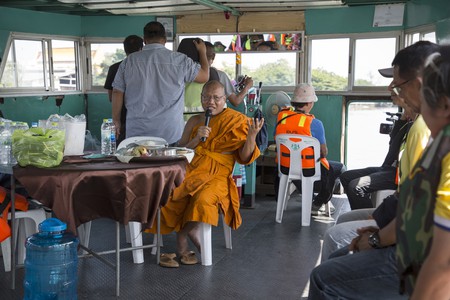 For Phra Mahapranom Dhammalangkaro, recycling is not too different from mindfulness meditation. Buddhists have long mastered the art of transforming “brain waste” into something positive. “Get rid of the anger by using forbearance and mercy. Take the jealousy out by using sympathetic joy and sublime states of mind,” he says. “Recycle our brains so that our brains have power.”

“We need to clean material waste out, as well as cleaning the waste in the brain,” says Dhammalangkaro. “And then, we will find true happiness.”