Manit Sriwanichpoom: Blurring Photography and Film with Activism in Thailand 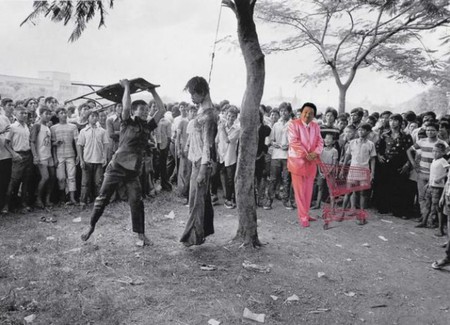 Manit Sriwanichpoom is a photographer and film producer who does not shy away from the issues facing modern Thailand, from political unrest to social inequality. Through his photography and film projects, Sriwanichpoom presents a different vision for Thailand, and asks viewers to question what’s really going on in the land of smiles.

Manit’s Pink Man series, and the production of feature film Shakespeare Must Die, both tackle uncomfortable subjects that are not generally discussed by the Thai public and considered out of bounds by those who run the country.

Those unfamiliar with one of the most developed Southeast Asian countries could easily miss the simmering tension that has led to a rash of protests that make international news when they descend into violence. Thailand has suffered endemic social unrest over the last century, with seven unsuccessful attempts to overthrow the government and 11 successful coups taking place since 1932.

It is in part the difficulties inherent in discussing the political and social aspects of Thailand that has led to such a divided society. Manit’s work tackles current issues head-on, but he also uses images from Thailand’s past as a reminder to learn from history.

Monarchy and religion are the most sensitive subjects that appear in his work. In an interview with Art Radar Asia in 2010 Manit said ‘We can’t avoid […] these three pillars of the Thai nation when we really want to know the answer to the question: ‘Who are we?’

Bangkok born and bred, from an early age Manit enjoyed drawing, and his initial plan was to study architecture. Instead, his exams results afforded him entrance to Srinakharinwirot University, a government-funded liberal arts institution where he learnt not only photography, but also the importance of freedom of expression.

Manit is also the owner of Kathmandu Photo Gallery. Located opposite the Sri Mahamariamman Temple in the neighborhood of Silom, this small gallery was set up by the artist to shine a light on Thai and Asian photography. The gallery has a yesteryear feel to it, with black and white photographs almost completely covering the green walls on the ground floor. The second and third floors of this shop-house are given over to temporary exhibitions.

Over the years Manit has become involved in prominent campaigns. He was a huge support for the Bangkok Art and Cultural Centre, an impressive Guggenheim-esque building in the center of the city; the plot of land on which it was built often of more value to Bangkok’s status as Asia’s shopping capital. He also fought Hollywood’s destruction of Maya Bay, a location used in the film ‘The Beach’, where an area of outstanding natural beauty was changed to fit the ‘perfect’ image producers wanted to create.

Manit’s passion and anger can be seen in his most famous works. 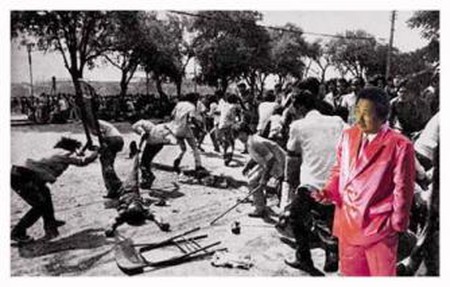 Manit’s creation is a man with a fuchsia pink suit, who often appears with a matching shopping trolley or mobile phone. The Pink Man first appeared in 1997, pushing his cart through Bangkok’s shopping district, an area of explosive consumerism that had begun to engulf the city.

The color pink was chosen for its tastelessness, associated with the neon lights of the sex trade and with showing off. It clashes with the surroundings, standing out for the wrong reasons.

Throughout the years The Pink Man has appeared around the world: among Beijing’s skyscrapers, Europe’s designer boutiques and in Bali after the nightclub bombing in 2002.

The Pink Man has also drawn attention to Thailand’s tourism trade, trundling through a hill-tribe village in Chiang Mai, an uncomfortable mock setup in which people and their way of life are put on display for visitors to gawk at.

One of the most controversial images places The Pink Man as a witness to the protests of October 1976, including the most famous photograph of the day: a black and white image of a young man hanging from a tree, being beaten by a man holding a chair.

‘Horrors in Pink’ (2001) was a reaction to the election of Samak Sundaravej to Bangkok Governor. He was the interior minister at the time of the massacre in which at least 46 students from Thammasat University in Bangkok were killed; Samak went on to become Prime Minister in 2008 and denied any wrongdoing. When questioned by CNN about his part in the killings he replied that ‘one unlucky guy’ died during the attacks of 6th October.

The previous government created the Ministry of Culture’s Creative Thailand Film Fund, which offered financial support for Thai-made films. Manit worked alongside his partner Ing K as the director of photography on one of the films chosen for governmental funding, Shakespeare Must Die.

The film tells the tale of a theater troupe in an imaginary country who wish to perform their version of Shakespeare’s 400 year old play Macbeth. The country is ruled by the Dear Leader, a dictator with an adoring following who take offense to the production, seeing it as a smear campaign against their ruler.

Although the film won the Grand Prize in Fiction and NETPAC Prize at the Tripoli International Film Festival in November 2013, it has hardly been seen in Thailand. A ruling by the Thai Film Censorship Board claimed ‘Shakespeare Must Die has content that causes divisiveness among the people of the nation, according to Ministerial Regulations stipulating types of film’.

During the period between filming and release a new prime minister had been elected, the sister of Thaksin Shinnawatra, a former PM who fled the country after charges of corruption and abuse of power. The similarities between Dear Leader and Thaksin were said to have made the government uncomfortable.

Ing K believes another scene that caused offense to the establishment was based on the photographs from the October 1976 demonstrations, the same images that appeared in Manit’s The Horrors in Pink.

After the film was banned in Thailand, Manit and Ing launched an appeal for it to be reinstated. In a statement following the ban Manit wrote ‘It’s as if we’re actually living under a real live Macbeth. […] This is the first Thai Shakespearean film and, for reasons of national security, it is deemed too dangerous for Thai people to see!’

The duo’s every move during this time was recorded by videographers and turned into a two and a half hour documentary, Censor Must Die.

Through a lucky fluke Censor Must Die has not been officially banned by the government: films based on news items are exempt from censorship. This situation was described as ‘winning the lottery’ in a brief statement by Manit to The Nation newspaper. Despite avoiding the ban, so far Censor Must Die has been shown in only one cinema in Thailand. The Friese-Greene Club is a members-only theater with just 12 seats, confirming that mainstream cinemas are unwilling to take risks on controversial films.

Although Shakespeare Must Die remains banned, Manit Sriwanichpoom is still dedicated to promoting the film, and similarly dedicated to the belief that artists should be free to create pieces that ask questions and offer an alternative view to the mainstream.