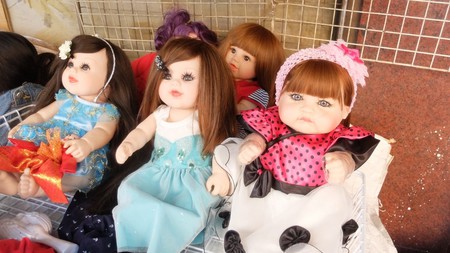 Thai’s are known to be a superstitious bunch, and the Luk Thep baby doll tradition is no different. Want to know more about the fascinating Luk Thep culture that made headlines around the world? Read our article to find out more about this unique tradition and the ongoing search for good fortune.

What is a Luk Thep?

Luk Thep, or “Child Angels” are plastic, life-like baby dolls that are believed to be possessed by spirits that bring about good luck and future prosperity. Luk Thep are treated like any other baby or child, they are fed, dressed and cradled. The lifelike manufactured dolls have become a large and (somewhat) normal part of everyday life for Thai people as well as a worldwide sensation that international media outlets latched on to.

How did the Luk Thep tradition come about?

Mae Ning is the individual largely responsible for setting the trend of turning the humble plastic doll into revered carriers of good fortune. Mae Ning, who is a doll seller is also a Hindu ritual expert (although self-professed) and a local radio DJ, she claimed on air that the dolls to have superpowers. Shortly after the statement Buddhist monks and fortune tellers held rituals to place “lucky” spirits into the plastic dolls. Thai celebrities were quick to jump on the bandwagon and were seen carrying Luk Thep where ever there went. Taking the dolls to swanky restaurants and nail spas and even demanding separate plane seats for them. Thai Smile a national low-cost carrier of Thai Airways even allowed “parents” or “guardians” of the Luk Thep to purchase seats for their Child Angels, for them to be offered onboard meals and briefed flight attendants to treat them like any other child passenger. 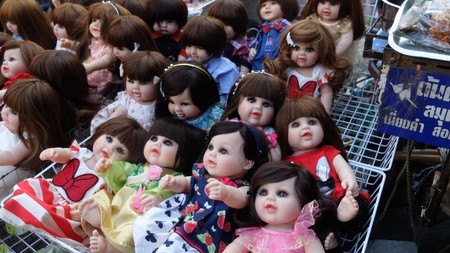 Where does the Luk Thep tradition originate from?

There are a few different theories on the origins of Luk Thep, with some making the assumption that Luk Thep are updated versions of Kuman Thong. Kuman Thong were fetuses which had passed away before being born which were kept and believed to carry the spirit of the dead child. Others believe that the Luk Thep tradition is tied to Thailand’s low fertility rate, as middle-aged Thai women are most often the ones toting these sacred dolls about. Another common belief is that due to the challenging economic climate in Thailand in 2016 when the tradition was born, Thailand’s citizens needed something to cling on to (literally). However, the consensus sways more towards the Luk Thep culture being connected to the fusion of Thailand’s strong Buddhist belief and influences from Hinduism, animism and object worshipping traditions.

Next time you see a life-size doll being pampered and doted on by a bunch of adoring adults in the Land of Smiles, you’ll know exactly what is going on and be able to fill in the blanks for any bewildered travellers.