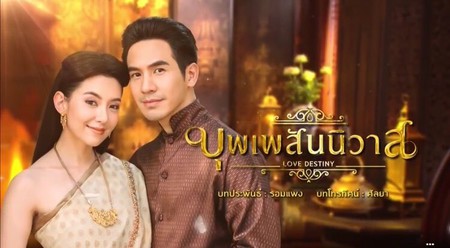 Soap operas are one of those genres that seem to transcend cultural boundaries. From Spanish telenovelas to Korea’s K-Dramas, themes like star-crossed love, family strife, and a dash of comedic relief appeal to worldwide audiences en masse, and Thailand’s long-time obsession with its own lakorns is no different. But the country’s latest hit “Love Destiny”, or “Bupphaesannivas”, is on another level of popularity entirely, superseding the entertainment realm and operating as a symbol of Thai nationalism and a tribute to its vibrant history.

The period drama has captivated the country, offering a rare pop culture insight into one of Thailand’s more celebrated historical eras. Its finale last month commanded an all-time viewer score after smashing records steadily since it first aired in February, and global audiences from areas like Cambodia, Korea, China, and Russia are tuning in as well.

The show’s heroine is a 21st century archaeologist who, following a fatal car crash, is reincarnated in the body of Karaket, a noble woman living in the 15th century Ayutthaya Kingdom and is generally abhorred by her peers. Viewers follow Karaket’s struggles to adjust to this new time – and rework her intolerable reputation – and of course, cheer on her star-crossed love story.

Ayutthaya was capital of Thailand long before today’s bustling Bangkok, and under the rule of King Narai it thrived as an international hub in the early days of trade and exploration from areas like Europe, India, and China. The leadership and diplomacy of King Narai and his court played a pivotal role in the country’s future posterity during a time when Western colonialism in the region was just beginning.

But through the veil of drama and humour are brilliantly contextualised lessons on Siamese history. The series is based on a novel of the same name, and the author, who goes by Rompaeng, reportedly spent years researching historical documents to accurately portray the culture of the time, as well as the royal court’s handling of Western diplomats with unknown agendas and other facets of foreign influence. Many of the foreign nations represented in King Narai’s court would go on to colonise much of Southeast Asia – but never Thailand.

The show’s underlying theme of a sustaining Thai heritage has spurred a renewed sense of nationalism in the Kingdom. Tourism to the ruins of Ayutthaya, today a UNESCO World Heritage site, tripled after the launch of the series – to the tune of an estimated 10,000 visitors per day according to tourism officials – and the park recently extended its hours and security to accommodate this enormous influx.

The park has even had to close certain parts of Wat Chaiwattanaram, a central site appearing in the series, to repair damage caused by eager fans climbing the ancient ruins to get the perfect photos.

Thais around the rest of the country – especially women – have become so enthralled with the show that traditional Thai period costumes are becoming more and more popular as everyday wear. The trend is so strong that senior government officials were prompted to release a statement saying the traditional garb is acceptable to wear for ID card photos.

Bangkok’s prison system has even jumped on board. Due to unprecedented prisoner request, inmate TV rights were extended to cover the series’ broadcast schedule. Kri Krasaethip, chief of the Bangkok Remand Prison, said some prisoners have no education and that the show has value in teaching inmates about Thai history.