Lost in Thailand: The Chinese Take on Chiang Mai 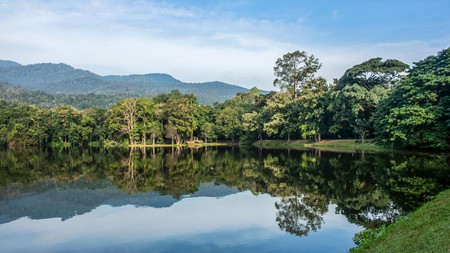 When the Chinese movie Lost in Thailand was released in 2012, it caused a sensation. Outwardly a slapstick comedy about hapless travellers failing to deal with the challenges of a foreign land, the cult hit was also a barometer of a changing travel world, with China on the ascent as the world’s most enthusiastic travellers. Critics hailed Lost in Thailand as a Chinese answer to Planes, Trains & Automobiles, with Chinese culture in the starring role.

Once upon a time, the backpackers filling the hostels of Chiang Mai were predominantly European gap-year students, joined by a smaller contingent of globetrotters from America, Australia, New Zealand and Japan. Today, some 6,000 Chinese tourists arrive in Chiang Mai daily, accounting for a third of tourist arrivals, crowding the city’s hotels, hostels and tourist sights.

In response, Chiang Mai has pivoted away from European backpacker clichés such as banana pancake breakfasts and reggae as mood music, and retuned tourism to appeal to Chinese tastes, with menus in Mandarin, Chinese-language guided tours and daily flights to 17 Chinese cities – more than half of all international flights into Chiang Mai.

Chinese travellers make regular pilgrimages to landmark locations from the movie, but there’s more to Chinese culture in Chiang Mai than one slapstick blockbuster. To see Chiang Mai through Chinese eyes, take time for some of the following sights and experiences.

The Lost in Thailand trail

Fans of Chiang Mai’s most famous movie – the highest grossing film in Chinese history at the time of its release – make regular stops at Lost in Thailand locations, including the bazaars around Talat Warorot, setting for a market stall-crushing car chase, and the sprawling green grounds of Chiang Mai University. The university grounds are still one of the most pleasant places in the city to wander, and you can pause to recharge at the student-friendly food stalls of Talat Na Mor market, just outside the university gates.

Some of the movie’s most famous scenes take place in Chiang Mai monasteries, including an epic fight with a Muay Thai master on a dirt-floored boxing ring. Essential monastery stops include the stupa at Wat Saen Fang, the teak pagoda and noodle-eating Donald Duck statue at Wat Buppharam, the gold-topped chapel at Wat Phra Phutthabat Si Roy and Wat Chiang Man, established in the 13th century by King Mengrai, founder of Chiang Mai.

The crowds of Chinese backpackers stepping off flights from Beijing, Shanghai and Kunming are just following a noble Chinese tradition. Centuries before the Wright Brothers made their first flight, Panthay merchants were guiding horse caravans from Yunnan into Northern Thailand, trading tea and Silk Road goods for Thai imports. Many stayed, setting down roots in Chiang Mai, particularly in the area surrounding the city’s famous Night Bazaar on the west bank of the Mae Ping River. Known to locals as Chin Haw – literally, galloping Chinese – these early travellers bought Islam and Chinese cooking techniques to Chiang Mai, leaving an indelible mark on the city’s culture and cuisine.

Away from the centre, just off the highway leading north from Pratu Chang Pheuak, the Khuang Sing cemetery is an oasis of calm after the buzz of central Chiang Mai. While Thai Buddhists practice cremation, Chinese-Thais bury their dead in ornate tombs, set into raised grassy mounds. Some graves are subtly understated, others lavishly decorated, with stone lions and mock-ups of Confucian temple facades. The normally quiet mood changes dramatically during the Qingming festival in April when families flock to the cemetery to tend the tombs of their ancestors.

No Lost in Thailand tour would be complete without a detour to Mae Kampong, the sleepy hill village in the jungle-covered highlands east of Chiang Mai where some of the film’s most iconic scenes were filmed. Set in former opium-growing country, Mae Kampong has reinvented itself as a busy centre for organic tea, coffee and homestay tourism. Dozens of village homes now offer simple rooms in teak stilt houses, and homestyle village cooking, including delicious local red iced tea.

From this calm retreat, you can ramp up the adrenaline by swinging through the jungle canopy with Flight of the Gibbon – pioneer of the ziplining craze in Northern Thailand – or roam into the dense forests of Chae Son National Park, with its thundering waterfalls, elusive golden cats and flying lemurs. For a calmer detour, head downhill to the San Khamphaeng hot springs, whose soothing waters spill into a grassy glade, diluted to bathing temperature with water from mountain streams (locals love to cook eggs in the pools where the water emerges from the ground at boiling point).