How to Spend 24 Hours in Ayutthaya 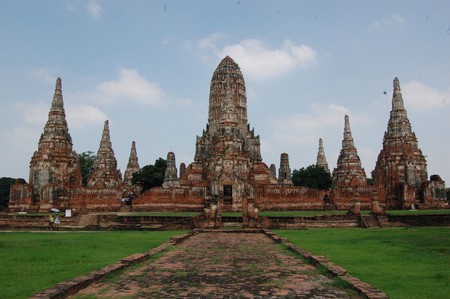 Located just 80 kilometres (49.7 miles) north of bustling Bangkok is the historic city of Ayutthaya. A distinct change of pace from what you might be used to in Bangkok, Ayutthaya is home to some of the most striking temple sites in the whole of Thailand, from Khmer-esque prangs standing tall amongst the ruins to haunting statues that seem to follow you as you explore the remains. It was once Thailand’s capital until the Burmese razed it, but thankfully, many of the temples have been partly restored and are open to the public; here’s how you should spend a day amongst them.

Midday in Ayutthaya can be seriously hot, so in order to have a more pleasurable temple-viewing experience, it’s important to start early. Not a morning person? Have a coffee, and a big breakfast – you’ll need it because, with such little time and so many temples, there’ll be a lot of walking involved.

Once suitably fuelled, it’s time to head to your first temple. It’s possible to rent a bicycle in the city for as little as ฿50, which might prove to be a nifty way to save on heavy legs. The temples aren’t too far from one another, so you won’t have to worry about donning a skin-tight cycling outfit or whether you’re fit enough to do it.

The first few temples you’ll be visiting are all part of the Ayutthaya Historical Park, and first up is Wat Phra Ram. Built on the site where one of Ayutthaya’s former kings was cremated, Wat Phra Ram contains prangs and pagodas that are typical of the temples here in Ayutthaya. The large pond adjacent to the temples provides a lovely backdrop and make for a unique photo opportunity capturing the reflection of the proud temple behind it. 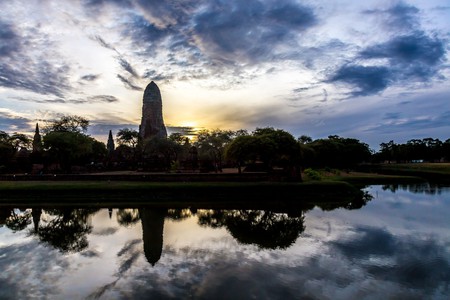 Next up is Wat Phra Si Sanphet, and rather than having prang-type temples, it consists of three imposing chedi structures in the shape of bells. In its heydey, these were the holiest temples in all of Ayutthaya, exclusively used by the royal family for events, yet the Burmese destroyed and looted them; restoration work began in the mid-20th century. Walking around these temples provides a glimpse into the past, and an up-close look at a site that would have been off-limits to the vast majority of the population at the time. 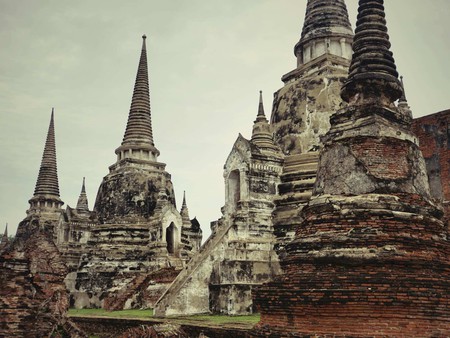 Following this, you’ll head to Wat Mahathat, home to one of the most famous statues in Thailand. Amidst the striking temples and Buddha statues is the curious, haunting sight of the Buddha’s head intertwined with the roots of a fig tree. It’s a popular subject for a picture, but care must be taken in order not to offend anyone – Buddhism is still the national religion of Thailand, after all. The combination of the lotus-filled ponds sitting at the feet of the temples and statues make for a pretty scene, providing the perfect opportunity to rest up, drink some water and enjoy your surroundings. 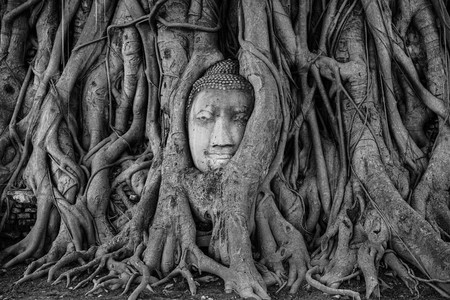 The final temple to visit in Ayutthaya Historical Park is Wat Ratchaburana. This temple site features beautiful stuccos on the walls of the buildings, such Garuda – Thailand’s national emblem and a figure in Buddhist mythology – swooping down onto Naga, another Buddhist symbol. There are other intricate carvings to be observed here too, such as lotuses and other Buddhism-related images, as well as frescos still visible inside the temples. 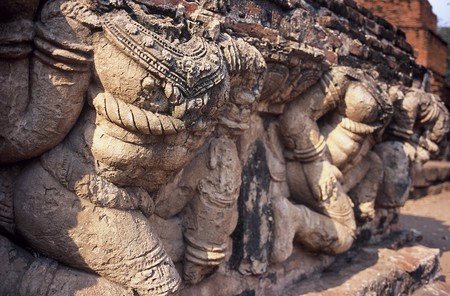 Lunch and the wider area

Whilst there are plenty of restaurants around, there are also street vendors who can supply you with a local bite to keep you going until dinner. If you’ve got a sweet tooth, the food to try is roti saimai – a Thai-style candy floss served inside roti, with enough sugar to keep you exploring the temples for days.

To the west of Ayutthaya is Wat Lokkayasutharam. A change from prangs and pagodas, this temple features a 37-metre-long (121.3-foot) reclining Buddha statue resting his head on a lotus flower. A unique temple to see, there’s not too much else going on in this area, so you should start thinking about walking or cycling to Wat Chaiwatthanaram before long. 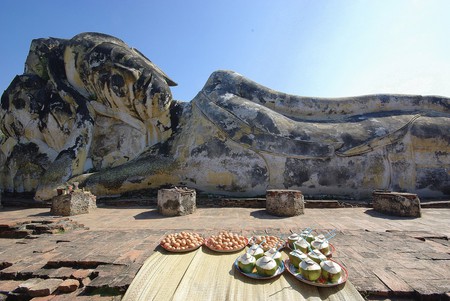 Wat Chaiwatthanaram is one of the most well-known temples in Ayutthaya, and it truly is a wonder. A jaw-dropping Khmer-style temple, its layout was designed to represent a cosmological chart of the Buddhist universe. Its central prang is 35 metres (114.8 feet) tall and is flanked by four smaller prangs and eight chedi-shaped towers. It was once far more impressive, with statues and paintings adorning the site, yet subsequent wars and neglect saw these all but vanish, leaving just ruins in their place. Despite this, it’s still an incredibly impressive place that’s famous throughout Thailand, and it’s easy to see why. Visitors can spend hours wandering around this temple, marvelling at its features and wondering what life was like here hundreds of years ago.

Finally, to the east of this temple along the Chao Phraya River lies not a temple, but a church. Saint Joseph Catholic Church has a long history in Ayutthaya, starting with Portuguese missionaries in the 17th century, and its distinctly European design and bright yellow walls help it to stand out in a city of Khmer temples. Whilst perhaps not as majestic as the temples, it’s a fascinating sight and is intriguing in the fact that Europe sought to come to the kingdom of Ayutthaya, and makes you wonder what they thought of it all.

After a long day of exploring, you’ll be glad to discover that there are plenty of restaurants in Ayutthaya that serve the typical Thai favourites, and you can find international meals too. A local favourite is the noodle soup dish kuay tiao ruea, or boat noodles, and hungry visitors can find them all over the city in either sit-down restaurants or street side, for that local experience. 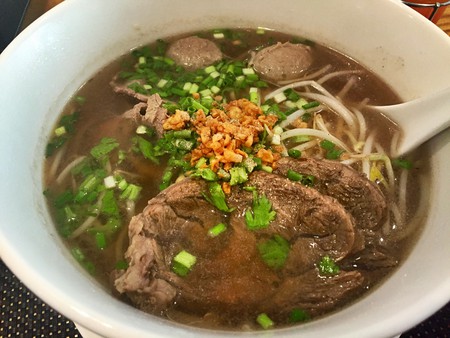 After walking several kilometres, you might want to find a quiet spot by the river for reflection, for a drink and to watch the sun come down over the majestic temples you spent the day getting to know. Thailand is a magical place, and there’s no doubt that after today, you’ll be well and truly under its spell.