How to Navigate Transport in Phuket, Thailand 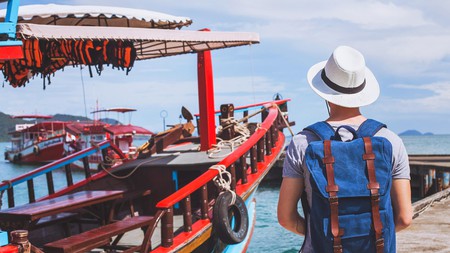 Thailand’s largest island, Phuket, is an immensely popular holiday destination. With many fantastic sights, beaches, and activities, you want to make the most of your time here. Here are all the ways you can get out and about and explore Phuket.

Small, open-sided buses connect Phuket Old Town with the island’s main beach resorts, such as Patong, Surin, Kamala, and Karon. Buses are cheap and reliable, though they can be slow because of the circuitous routes they take and the number of stops they make. Services are frequent from the early morning until late afternoon. There are no buses linking the beach towns, though. You’ll need to use another form of transport or connect through Phuket Town. Local buses depart from either the main bus terminal or Talad Sod market on Ranong Road. 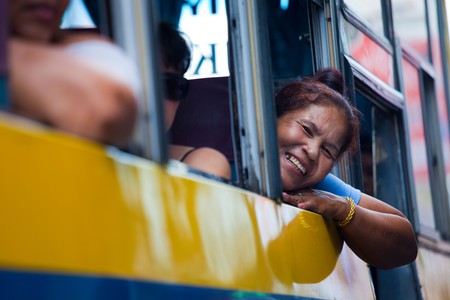 Local tip: A common scam, especially in the afternoon, is for tuk tuk and taxi drivers to tell you that the bus services have finished. Clarify with an independent third party or wait a while before paying for a more expensive journey.

Songthaews are common all over Thailand. They are small trucks or pickup trucks that have been converted to carry passengers, with two benches in the bed and a roof for shade. Phuket’s songthaews generally have their final destination displayed on them, and they will stop to collect passengers and let people off anywhere along their route. There are no set stops — find out the route, wait at the side of the road, and wave when you see a vehicle approaching. As with the buses, there are no songtheaws running around the island’s perimeter and linking up the beach resorts; travellers need to connect via Phuket Town. 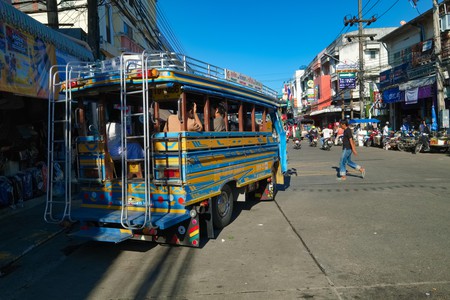 Local tip: If travelling to Phuket Town from elsewhere on the island, be prepared to be dropped off in the middle of town rather than at a bus station. Arm yourself with GPS to avoid the hovering tuk tuk and taxi drivers as it will only be a short walk to the bus station.

Phuket’s tuk tuks are unlike those in the rest of Thailand. They have four wheels instead of three, and are more like a small songthaew than a tuk tuk. Nonetheless, because tourists want and expect tuk tuks in Thailand, the locals give them what they want and call them tuk tuks!

Tuk tuks are the most expensive form of transportation in Phuket. Drivers are notorious for charging high fares. There’s generally little point in trying to find a lower-priced ride as drivers tend to stick together and charge agreed minimum prices, and under-cutting each other would be bad form. You can try and negotiate the price, but know that your attempts will probably be in vain. With no public transport between the beach areas, and buses/songthaews stopping in the early evening, tuk tuk drivers know that travellers have few other options than to sigh and agree to their high prices. You should always know the price before your journey begins to prevent any nasty surprises when you arrive. Avoid getting into arguments with tuk tuk drivers and keep your cool. Not only will you lose face by getting agitated in public, but other drivers are likely to wade into the disagreement, which can be intimidating. 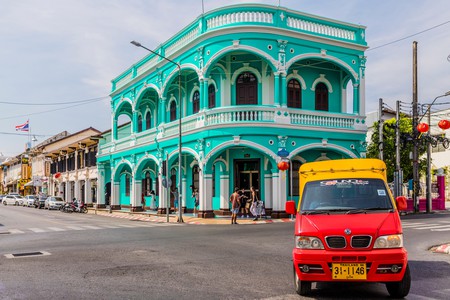 Local tip: It’s quite common for tuk tuk drivers to try and get you to visit pearl centres, jewellery stores, and other shops on the way to your destination. You’re under no obligation to agree and a firm no will generally do the trick. However, a visit is typically pretty quick and there’s no real hard sell. These brief stops can be quite interesting as well as benefiting the tuk tuk drivers.

Although still expensive, metered taxis are usually cheaper than tuk tuks in Phuket. You can’t help but notice the taxis — they are bright yellow and red, and have a large taxi sign on the top! A red light in the front window means that the taxi is empty and you can flag it down. Taxis also tend to congregate along busy roads and near major beaches and attractions. They can be difficult to find at peak times, though, as there are relatively few taxis on the island.

Non-metered taxis, as typically ordered by hotels and summoned to small taxi stands, charge flat rates. These are invariably higher than metered fares. Try to avoid using these for short journeys. You can, however, sometimes negotiate decent prices for a day’s charter to go sightseeing around the island.

Local tip: Make a note of the telephone number for metered taxis, or obtain an individual driver’s phone number or Line ID (a popular messaging app in Thailand). Order a taxi yourself when needed rather than relying on your hotel or trying to find one on the streets.

Phuket, as with most places in Thailand, has many motorbike taxis. They can be cost-effective for short journeys, especially for solo travellers. You’ll recognise a motorbike taxi because the driver will be wearing a coloured vest. Motorbike taxis tend to wait in groups at busy junctions, close to the beaches, and near popular attractions. You can also wave one down if they have no passenger on the back. Always wear a helmet and remember to agree over the price before starting your journey. As with taxis, it can be savvy to get a driver’s contact details to use them again during your stay.

Local tip: If you need a return ride, it can be worth arranging a pick-up time with your driver to avoid the hassle of renegotiating a price with another driver. If you’re visiting a remote spot it may also be wise to pay the driver to wait for you.

There are many vehicle rental companies in Phuket with a range of scooters, motorbikes, and cars for hire. Having your own transportation is often the best way to make the most of your time on the island and save money. While the requirements to rent a scooter or motorbike are often minimal, you really shouldn’t take to the roads without the necessary license, insurance, experience, and confidence. Thailand’s roads can be dangerous and you don’t want to be another road traffic accident statistic. Always wear a helmet when travelling by two wheels and wear clothes and shoes that will offer protection in the worst case scenarios. 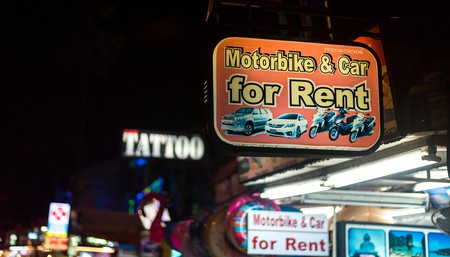 Cars are great for families and groups of friends who want to explore Phuket under their own steam. The road conditions in Phuket are generally good and there are plenty of places to buy fuel. Do remember to drive on the left and be vigilant of other road users.

Local tip: Check the condition of vehicles before accepting them and make the company aware of any damages or defects to prevent possible scams when you return.

Ferries, speedboats, and long tail boats are common sights in the waters around Phuket.

Rassada Pier, close to Phuket Town, is the main pier in Phuket. Several ferries and speedboats leave each day (typically with a morning and an afternoon service) for islands in the Andaman Sea and destinations along the mainland coast. You can travel by water to Krabi Town, Ao Nang in Krabi, Koh Phi Phi, Koh Lanta, Koh Bulon, the Trang Islands, Koh Lipe, and more. You can reach Krabi Town from Numchai Pier and Sea Angel Pier, and Koh Phi Phi is also served from Numchai Pier. There are ferries to Koh Yao from Bang Rong Pier. Do note that services will likely be less frequent, or subject to cancellations, in the monsoon season. 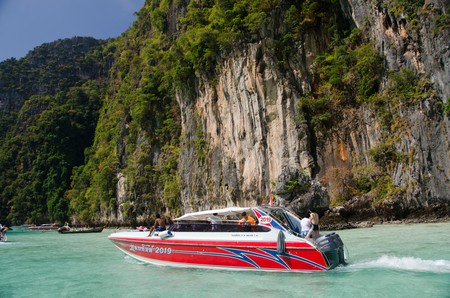 You can also privately charter a long tail boat for a day’s excursion, visiting nearby islands, travelling along Phuket’s coastline, or fishing in the sunshine. Rawai and Chalong Pier are good places to bargain for a long tail boat, though they are easy to find all around the coast of Phuket.

Local tip: If you book your ferry or speedboat tickets through a tour agency, it will typically include your transportation to the pier.

Although an island, Phuket is connected to the mainland by bridge. This makes it easy to get to and from Phuket by road, and there are numerous bus and minivan services to nearby provinces, Bangkok, and beyond.

Buses and/or vans to Takua Pa, Khao Lak, Phang Nga, Chumphon, Krabi, and other nearby destinations depart from the older bus terminal in the centre of Phuket Old Town. Long-distance buses and minivans leave from the newer bus station, which is located a short distance from the Old Town. Both government and private buses operate from here, with day and night services. You’ll go here for buses to Bangkok, Surat Thani, Hat Yai, and Hua Hin, to give a few examples. 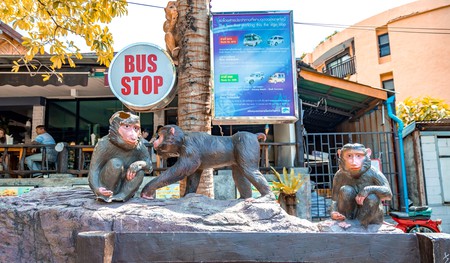 Local tip: It’s recommended that you book VIP bus services in advance to guarantee a seat at your chosen departure time.

Phuket International Airport (HKT) is located in the north of the island. It is one of Thailand’s busiest airports, serving many global destinations. There are regular domestic flights to and from Bangkok with Thai Air Asia, Thai Vietjet Air, Thai Lion Air, Bangkok Airways, Nok Air, Thai Airways International, and several international carriers, including Emirates, British Airways, Finnair, Garuda Indonesia, Oman Air, and China Airlines. Other domestic routes to and from Phuket include Chiang Mai, Hat Yai, Chiang Rai, Koh Samui, Utapao (for Pattaya and Rayong), and Udon Thani. 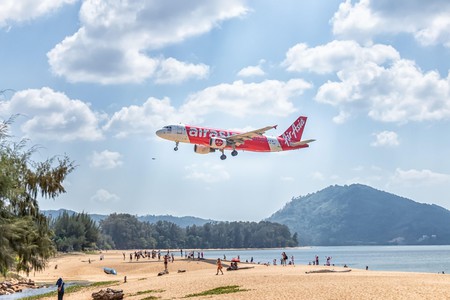 Local tip: Domestic flights can be very competitively priced, especially when booked in advance. It may only cost you a small amount more (and save you a lot of time!) to fly within Thailand than to travel over land.

Download the Grab app to book a ride with ease. Prices are cheaper than regular taxis. The Phuket Travel Guide app is also useful when exploring the island, as is Google Maps.

Local tip: Many Phuket accommodations are familiar with ordering Grab taxis if you need assistance.