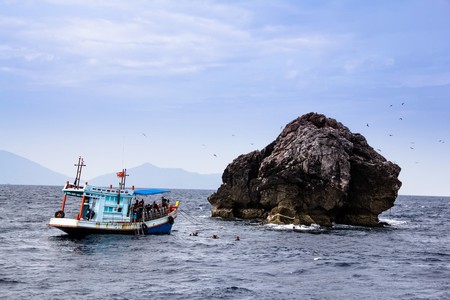 Hin Bai, also known as Sail Rock, is located in the Gulf of Thailand. One of Thailand’s best diving sites, marine explorers can spot a wide variety of fascinating creatures around the famous rock. Here’s everything you need to know about Hin Bai.

Hin Bai, AKA Sail Rock, is situated in the Gulf of Thailand. It is between the popular islands of Koh Tao, known for its awesome underwater explorations, and Koh Phangan, famous for its large parties. Hin Bai can be reached on a day trip from both islands. 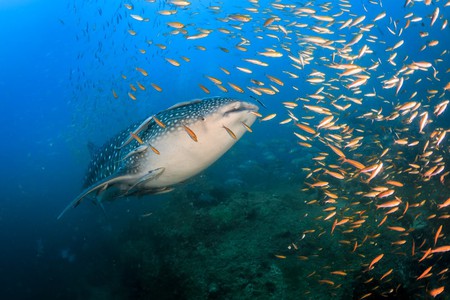 Due to its location away from major islands, Hin Bai attracts a rich diversity of aquatic life. There’s plenty of colour underneath the water’s surface and divers can spot an array of creatures big and small. Hard corals cover the rock and the nearby ledges. Spotting a whale shark is often a highlight; nothing can quite beat the thrill of having one of the ocean’s biggest animals swimming close to you. Schools of barracuda, batfish, snapper, jack fish, and queenfish add vibrancy to the waters. Other interesting creatures that can often be seen in the area include stingray, angelfish, anemonefish, eels, scorpionfish, trout, and soldier fish. While nudibranchs, crabs, and shrimp are among the smaller water-dwelling creatures around Hin Bai. 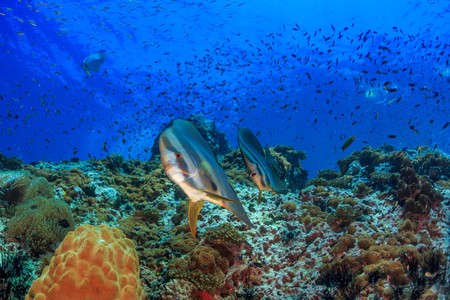 The grey rock of Hin Bai rises up eight metres out of the blue waters. It is even bigger below the water’s surface, though, reaching down for around 20 metres. It is one of the best sites for wall diving in the Gulf of Thailand. As well as being able to dive next to the natural wall, visitors can go inside the rock if they choose. There’s an entrance five metres down the rock and divers can swim vertically down through a channel known as “The Chimney”. The exhilarating experience brings divers to an exit some 18 metres under the water. The main rock also has several smaller rocks close by, including another large rock that doesn’t rise out of the sea. 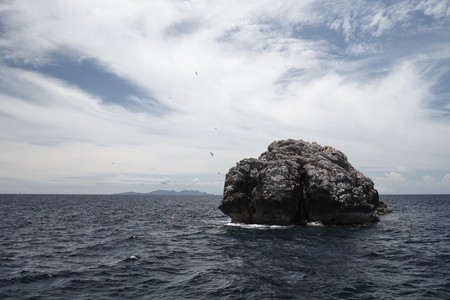 Sail Rock can be dived almost all throughout the year, and visibility is usually good at all times. The visibility is around 10-15 metres at the start of the dive season in January, and by February it has increased to around 20 metres. July, August, and September are usually the months with the best visibility; divers can expect to see for around 30 metres. March and April are the best months for spotting whale sharks. October to December is low season for diving in the area.

Other things to know

As a deep-diving site, divers may encounter strong currents. Groups should stay fairly close to each other and watch out for people encountering difficulties. It’s usually a safe dive site, though, as long as people exercise caution. 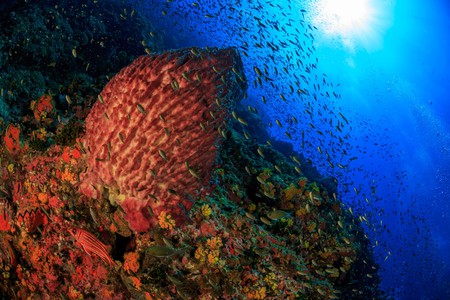