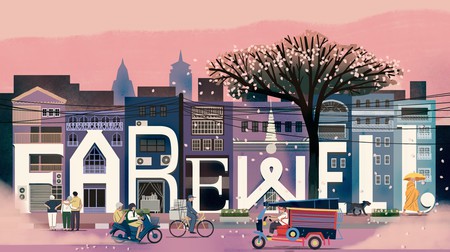 Bangkok’s movable metal-type printers cranked out newspapers, manifestos, journals and forward-thinking works of literature for over 180 years. But the craft has reached its inevitable conclusion. And the three remaining typesetters at Songsittiwan – the last print shop of its kind – are fated to turn the final page of this glorious chapter. 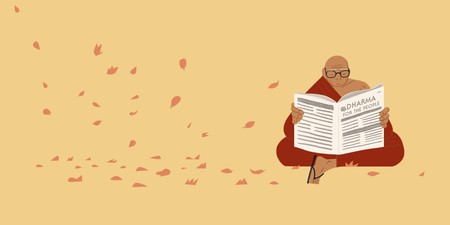 Dusty artefacts, rusty steel racks and a small labyrinth of shabby wooden furniture, all engulfed in a sickly mix of white fluorescence and the sunlight that seeps through the room’s broken windows. It might feel like a frozen-in-time museum display, but this curious chamber is in fact the typesetting department of Songsittiwan, a metal-type letterpress print shop that is the last of its kind in Thailand.

The only sign of life comes from three elderly workers, a family related not by blood but by metal types and printing ink. Tongkum, Sirichai and his wife Prapapon are the last three typesetters at Songsittiwan. For over a decade, they have endured a congested two-hour morning commute, six days a week, to show up and work on the contents of just one periodical, Dhamma Pua Prachachon (Dharma for the People), a monthly Buddhist journal whose publisher – an 80-year-old Buddhist monk – is the shop’s only client.

Sirichai maintains that the monk – who prefers the metal typesetting effect to the latest digital technology – is the only reason the shop has lasted this long. “He likes how the letters are spaced. He thinks it’s easier on the eye than the computerised layout,” says Sirichai, before adding, with a melancholic chuckle, “but he doesn’t know we’re closing down yet. No one has the heart to tell him.”

Prapapon, 64, and Tongkum, 73, started as typesetters when they were young girls – and are still doing the same thing half a century later. Sirichai started working in print at the age of eight. Coming from a poor family, he had no other choice. He learned to read and write on the job as an assistant and now, at 62, knows every skill in letterpress printing, from manual typesetting to binding.

The labour of letterpress printing

The manual printing process is labour-intensive. As the technique has been carried out since Gutenberg industrialised the printing press in the 15th century, letterpress printing requires workers to secure individual movable types on a smooth, flat surface, roll ink on the types, place paper on top, then press the paper against the types. The impression made by pressured, inked types become a ‘printed page’.

At Songsittiwan, much of the work takes place at ‘stations’. These bulky wooden fixtures are equipped with a series of compartments filled with hundreds of skinny, one-inch-long lead ‘sorts’ – similar to the letters of a keyboard – the locations of which the typesetters know by heart. To create their assigned text, they select the sorts and place them one by one on a ‘composing stick’. Even the empty space between words is a physical object in this process.

The history of manual print in Thailand began in 1816, when British missionaries in Myanmar used the first Thai script metal types to print the Bible; soon after, the Ten Commandments became the first book printed in Thailand with Thai script metal types. But the peak of print’s cultural and social influence was in the 1970s, and at that time there were more than 80 employees working at Songsittiwan. 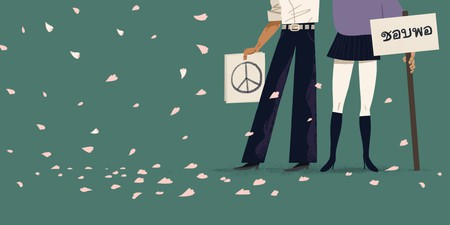 “In those days, the print media was extremely powerful. Everyone read newspapers, magazines, books, and competition was fierce,” recalls Sirichai. “Newspapers had a tremendous impact on the masses.”

The 1970s were a revolutionary period for university students in Bangkok, many of whom took to the streets, fighting for democracy against an authoritarian regime. “Even when the country fell under military rule and newspapers were ordered to discontinue, it was never for long; the military also revered the press.” There’s a hint of pride in Sirichai’s voice as he reminisces about when he worked for iconic writers and editors; they were the celebrities in an era when print was king.

Back then, Sirichai would run from one newspaper print shop to another, shuttling between Phanfa, Nakhon Sawan, Dinso, Lan Luang and Chakkraphatdi Phong roads – printing districts of that era – that doubled as hangout spots for journalists, poets and artists, who would use the equipment to crank out manifestos. But after a lifetime of printing avant garde journals, anti-government pamphlets and forward-thinking literature, Songsittiwan’s decades-old machines will soon reach retirement.

“This one is for printing proofs, after the texts have been typeset and put on the page layout,” explains Sirichai, referring to the heavy-duty machines grouped together in the far left end of the room, sighing with a solemn air. He dusts off the embossed logo on the side of one particularly intimidating steel beast. It’s a Korrex from Germany, built in 1966. European machines like this one would be used to produce the leading newspapers, such as Thairath and Daily News – publications which have now moved away from letterpress print in favour of modern printing methods.

Once computer-based printing technology started to replace the letterpress method in the late 1970s, type foundries stopped manufacturing Thai script sorts. Songsittiwan, seemingly out of stubbornness, was the only shop to persevere with the traditional method.

With the end of their trade looming ever nearer, Sirichai, Prapapon and Tongkum are candidly unsentimental. “The process just doesn’t make sense anymore in this digital day and age,” says Sirichai. “People want things to be fast. Just like those smartphones: everyone’s competing to make them faster; the slow can’t survive. Why keep it going? There’s no demand.”

Other printing districts have long since fallen prey to gentrification: some shops have been replaced by hipster cafés, while at least two are now boutique hotels: Bangkok Publishing Residence on Lan Luang and the Printing House Poshtel on Dinso. And Songsittiwan may fall victim to a similar fate. The shop looks forlorn from the outside, with the rest of the building noticeably empty, its windows shut and covered in thick grime.

“I wouldn’t mind learning new skills if I was given the chance,” muses Sirichai, about a potential second life in the digital world. Prapapon feels the same way. Tongkum, on the other hand, is going to retire and stay home with her family, an option she could have chosen long ago. “They couldn’t find people to do what we do,” she says. “We stayed on because we were the only ones left. And after us, no more.”

From the Ten Commandments to Dharma for the People, metal typesetting in Thailand has survived for 183 years, with Sirichai fated to compose the last line of this colourful epic. While it is not yet history proper, the final letters are being set. And the trio is well aware that there are no more pages, no next chapter.