Fed Up of Eating Rice in Thailand? Try These Carb-Free Alternatives 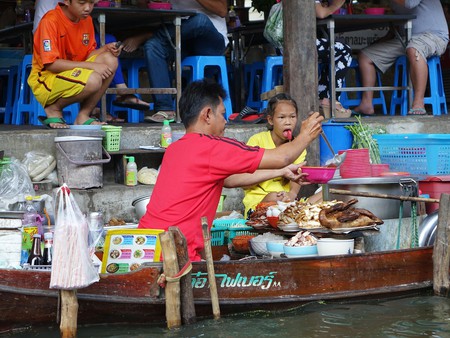 One of the greatest aspects of travelling around Thailand is the exposure to all the different kinds of delicious food around the country. From fragrant curries to tasty noodles, Thailand’s cuisine is rightfully regarded as among the best in the world. Yet for all its deliciousness, eating rice and noodles every day can soon get monotonous, and isn’t exactly easy on the waistline. Fortunately enough, Thailand has plenty of carb-free and low-carb dishes, and here are the best of them. 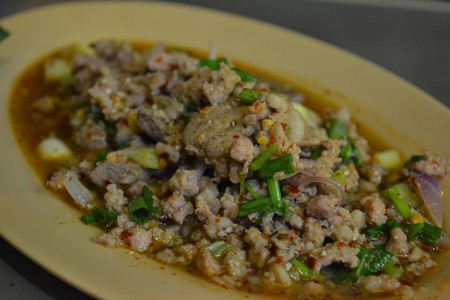 Hailing from the Isaan region of Thailand and also a popular dish in Laos, laab is a spicy meat salad that can be found all over Thailand. Usually made with minced pork, it sees rice roasted and pounded into fine pieces, before being added to the mixture of lightly-cooked pork, onions and fiery chillies, among other ingredients. The result is a juicy, spicy salad, free of guilt and full of flavour. 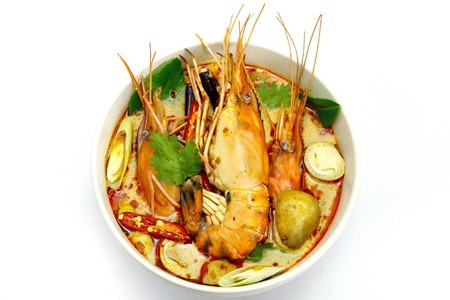 One of Thailand’s most famous dishes, tom yum is a distinctly orange-coloured soup, usually containing prawns. As one may garner from its fiery colour, it contains a base of nam prik pao, lemongrass, galangal, kaffir leave and chilli, all of which contribute to its spicy, fragrant and sour flavour profiles. Whilst it’s often served with rice, its thin consistency means it can be enjoyed equally as a soup or a curry, rendering the rice optional, and cutting the overall amount of carbs. Keep a glass of milk nearby, because it’s going to be hot. 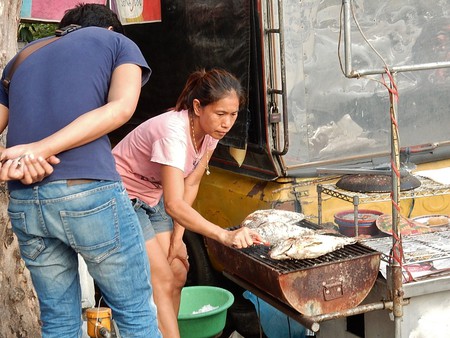 Thailand is known for its many sandy beaches and clear seas, and with seas comes another thing – fresh fish. You’re never too far from fresh fish in Thailand, which means you won’t be far from the delicious dish of miang pla pao. Miang pla pao sees the fish, killed, gutted, stuffed with ingredients such as lemongrass, rubbed with a thick layer of salt and then placed on a grill. Once cooked, it’s served alongside a bounty of fresh vegetables and sauces, making for a dish that’s about as fresh as they come and incredibly healthy by Thai standards. It sure beats battered fish and chips, anyway. 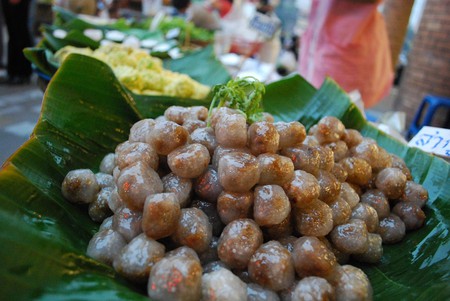 A delicious bitesized treat, saku sai moo is a tapioca dumpling filling with fried pork, peanuts, onion and garlic that has been fried together in a rich fish sauce. The cooking mixture is then placed into tapioca dumplings before being steamed. The end result is an aromatic, delicious dumpling that’s incredibly moreish and tastes even better when eaten alongside chilli. Perfect finger food.

Another delicious northern Thai dish, kap moo and nam prik num are two different items that come together to make a great dish. Kap moo is crispy pork rind, which is then dipped into nam prik num, a paste consisting of grilled green chillies, aubergines, garlic, coriander and fish sauce. Popular on any northern Thailand dinner table, for a healthier option swap the kap moo for raw vegetables to dip – though you’ll be missing out. 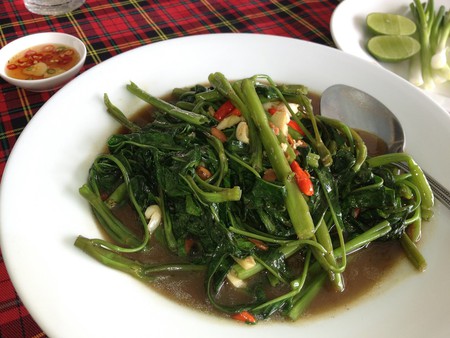 A great, healthy dish that’s incredibly easy to cook, pad pak boong is morning glory that has been lightly fried alongside oyster sauce, chillies, garlic and often sugar. Popularly eaten as a breakfast or as a side dish, it’s a great way to load up on green veggies before starting your day. Though it’s readily available through Asia, morning glory can be hard to find in the West – so you’d better load up on it while you’re here. 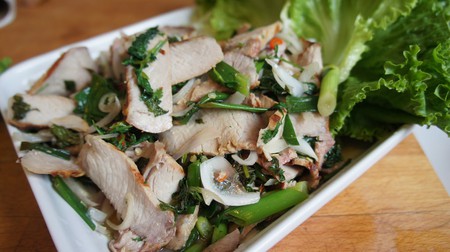 “Nam tok” in Thai translates to waterfall, which refers to the juices of this dish. Similar to laab, rather than minced pork it sees large pieces of grilled pork mixed with lemon juice, onions, chillies, mint, toasted rice and fish sauce. Juicy and delicious, the mint and lemon make the dish taste incredibly fresh, and help to balance out the spice from the chilli. A great option for those who are sick of the usual Thai fare and wish to try something a little bit different. 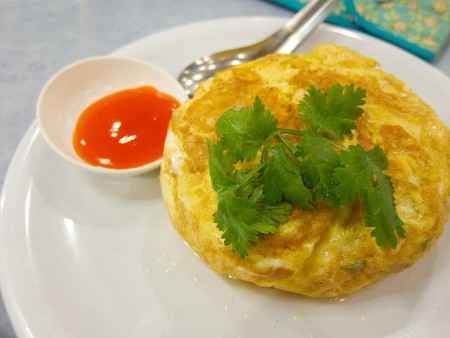 Just when you thought eggs couldn’t get any more diverse, kai jiew is the Thai version of an omelette – only, instead of filling it with cheese and ham, typical fillings include chicken, pork or spring onions. Rather than being golden, thick and fluffy like you may be used to, instead it’s usually thin, browned and delightfully crispy. Whilst it may be common to serve kai jiew alongside rice, it’s normal too to eat it on its own, and is a popular dish at breakfast time. 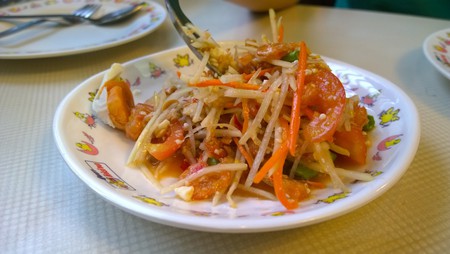 The queen of Isaan cuisine and one of Thailand’s most popular dishes, som tam is a fiery papaya salad that’s prepared in a pestle and mortar alongside tomato, lemon juice, dried shrimp, fish sauce and, of course, a handful of fiery-hot peppers. One of Thailand’s spiciest dishes, som tam is a popular healthy option that’s eaten all over the country, though is best enjoyed in Isaan. Of course, it is possible to order it without the chillies – but where’s the fun in that?