Everything You Need To Know About Thailand's Vegetarian Festival 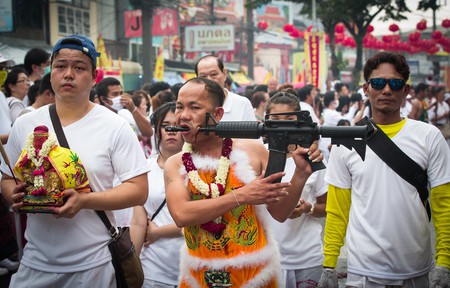 Whether it is personal ethics that drive them, environmental awareness, or simply because they want to follow in the meat-free footsteps of Beyoncé, the number of vegans and vegetarians is growing. Whether you’re a veggie or not, make your way to the one of the biggest celebrations in Thailand to sample the most delicious grub at Vegetarian Festival.

From Saturday, October 1 through Sunday, October 9, Thais will be celebrating this year’s Vegetarian Festival, otherwise known as the Tesagan Gin Je Festival. The festival is called the Vegetarian Festival, but during this time most Thais will actually eat vegan, or jay. This version of veganism is a bit different from what Westerners are used to, however. In addition to avoiding meat, milk, cheese, and eggs, Thais practicing veganism avoid a number of different foods based on smell alone. These foods include garlic, onions, green onions, scallions, and more. 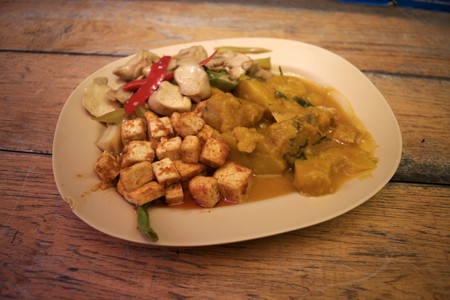 The Vegetarian Festival is actually based on Taoist traditions and beliefs. Taoism is a philosophy rooted in Chinese customs that emphasizes living harmoniously. One way to work towards achieving this peaceful state is to abstain from eating meat. Thais celebrating and participating in the festival must also abide by a long list of rules, such as wearing white during festivities, not consuming liquor or taking drugs, and abstaining from sex. The last and seemingly strangest rule is that women who are pregnant or those who are menstruating are forbidden from partaking in rituals. 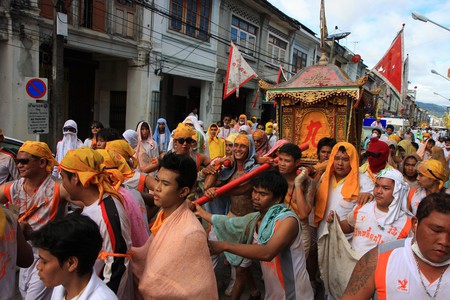 The festivities in Phuket are by far the most intense and bizarre ones going on throughout the country. With 30 percent of the population being of Chinese ancestry, the city goes all out for this noteworthy festival. While many Thais are content with chowing down on delicious vegan food and calling it a day, their southern compatriots can be found stabbing themselves in the face with knives, putting guns through the holes in the mouth they create by puncturing themselves, hanging from the flesh of their back via fish hooks, walking on fire, and engaging in many other painful rituals. The men and few women who participate, however, say they feel no pain. This is not because the vegan food is making them invincible, either. These men are said to be possessed by the Ma Song, a spirit who prohibits the body from feeling pain during these rituals. 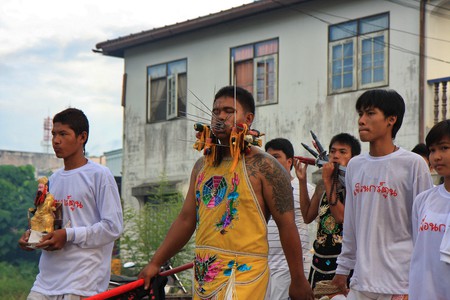 Because of its Chinese roots, this popular festival is the most colorful and celebrated in Bangkok’s Chinatown. Do not worry; there will be no flesh-mutilating festivities here, either. Thais with and without Chinese backgrounds will be celebrating and praying during this holiday, so be sure to check out one of the stunning shrines and temples located in this historic neighborhood. Some of the shrines and temples worth a visit are Wat Mangkon Kamalawat, Wat Traimit, or the Temple of the Golden Buddha, Leng Buai La Shrine, and the Sri Maha Mariamman Temple. 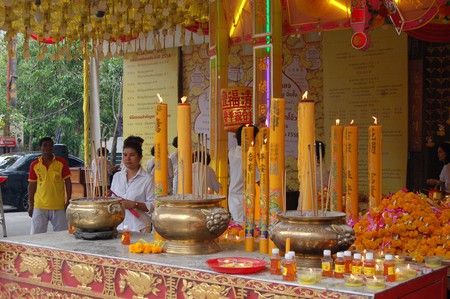 In addition to visiting these places of prayer, be on the lookout for yellow flags hanging from vendors and on the outside of restaurants. It is this flag that symbolizes a meat-free establishment, at least until the festival comes to an end. Chinatown is usually teeming with meat, from full-faced pigs to an entire coast’s worth of seafood. This will not be the case this week, however. You can even find vegan-friendly food in Bangkok’s countless convenience shops. Some of the vegan treats include vegan croissants, barbecued ‘pork’-filled buns, and other strange combinations … just look for the yelling wrapping. 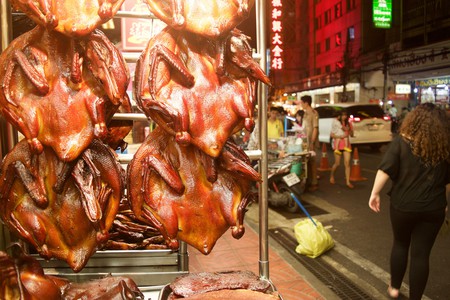 To get to Chinatown, take the MRT Subway to station Hua Lumphong, and the main festivities should be about a 15-minute walk from the station. You can also grab a taxi or take the Chao Phraya River canal boat. The closest pier to Chinatown is the Rajchawong Pier.