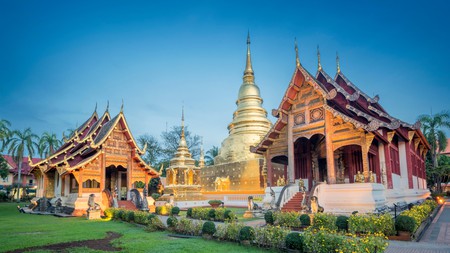 The northern Thai state of Lanna – the kingdom of a million rice fields – was founded five centuries before Bangkok came into existence, and a strong Lanna identity endures in Chiang Mai, 250 years after Lanna was subsumed into the kingdom of Siam. You’ll see it in the cuisine, the temples, the festivals, the language and the kalae (carved beams depicting celestial forms) that rise above the rooftops of the northern Thai capital.

The history of Thailand that most people know is the story of Siam – the unified Buddhist kingdom founded by King Rama I on Rattanakosin island in modern-day Bangkok. In Chiang Mai, and across northern Thailand, people tell different tales about warrior kings on forested mountains and demonic giants converted to the path of righteousness by the teachings of Buddha.

Lanna culture is not always immediately obvious to the untrained eye; to experience it, you’ll need to roam to less familiar corners of the city, where modern Thai culture is just a veneer over more ancient traditions that hark back to the animist culture of Thailand’s hill tribes. Here are some top spots to connect with Northern Thailand’s soul.

While every Bangkok household proudly displays portraits of the Thai royal family, in Chiang Mai, locals show similar respect to the Three Kings – Phaya Mengrai of Chiang Mai, Phaya Khun Ramkhamhaeng of Sukhothai and Phaya Ngam Meuang of Phayao. It was an alliance between these three rulers that forged the kingdom of Lanna in 1296, with Chiang Mai as its capital.

In the middle of the Old City at Anusawari Sam Kasat, a statue marking this auspicious meeting has become an important site for public devotion, with bouquets of flowers, candles and incense left daily by people from the Lanna community. Every evening, the public square in front of the monument hums with activity, as families promenade and children fill the sky with light-up flying toys, inspired by the seeds of the dipterocarp trees that climb the forested mountains at the city limits.

The tidy, wall-bound grid of streets at the heart of Chiang Mai is often described as the Old City, but the first city of Chiang Mai – Wiang Kum Kam – lies crumbling quietly in a residential suburb on the southern city limits. Tucked into a curve of the Mae Ping river, scattered stupas and temples poke up between village houses, making the extent of the capital founded by King Mengrai in 1286.

Wandering the tree-shaded lanes, or exploring by horse cart, you’ll stumble across the brick ruins of centuries-worn stupas and traces of the ancient city’s former grandeur, including towering Wat Chedi Liam, whose niche-studded pyramid spire pays homage to the Mahabodhi Temple at Bodh Gaya in India.

When King Mengrai shifted his capital from Wiang Kum Kam to the site of modern Chiang Mai in 1292, he ushered in one of the greatest periods of construction in Thai history. The precincts of the walled city and the surrounding countryside were filled with dozens of sprawling monasteries and towering chedis (stupas), including legendary Wat Phra Singh – Chiang Mai’s largest and grandest monastery – and Wat Chiang Man, constructed just a few years after the city was founded.

Later Lanna rulers left a handful of more personal monuments dotted around the city. Chao Kavila, the last king of independent Lanna, was responsible for the auspicious stucco elephants that guard the highway running north from the Old City. Further north, two stucco lions crown an artificial island near Chiang Mai’s Chinese cemetery, left by the militaristic Chao Kavila as a warning to would-be invaders from Burma.

Walking with the royals

Even after the unification of Thailand, the Lanna royal family remained somewhat aloof from the kings of Siam and their noisy, bombastic capital. The last Lanna princess, Dara Rasmee, was officially a consort of King Rama V, but on the king’s death in 1910, she retreated to a life of modest seclusion at the dainty, filigree-screened Dara Pirom Palace, hidden away behind the police heliport at Mae Rim on the northern outskirts of Chiang Mai.

For a glimpse of living royal culture, follow the winding road that climbs past Wat Phra That Doi Suthep, on the forested slopes of Doi Suthep mountain. Phubing Palace has been the official winter palace for the Thai royal family since 1961, and you can wander the flower and butterfly-filled grounds when the royals are not in attendance (note the strict dress code: no exposed calves, knees, thighs, shoulders or cleavage).

Kalae – wing-like wooden panels carved with stylised birds, flowers and clouds – are perhaps the most instantly recognisable symbol of Lanna culture in Chiang Mai. Found adorning the gables of everything from village homes to modern hotels and shopping malls, these iconic ornamentations trace their origins to the horns of freshly sacrificed water buffalo, used to decorate homes in animist villages in Thailand’s northern hills.

Buffalo sacrifices still play an important part in the Pu Sae Ya Sae festival in May or June, honouring two demonic ogres who reputedly stalked the jungles of Doi Suthep mountain gobbling up human victims. When the giants tried to consume Lord Buddha, he converted them to a life of vegetarianism, with the caveat that they would be permitted to eat buffalo meat once a year. Accordingly, the festival culminates at Wat Phra That Doi Kham with the sacrifice of a buffalo by a Lanna shaman ritually possessed by the spirits of the cannibal giants.

A less visceral way to connect with Lanna culture is to light a lantern at the Yi Peng festival, held in Chiang Mai at the same time as the nationwide festival of Loi Krathong in November. Locals release lotus-shaped baskets made from flowers, leaves and flickering candles on the Mae Ping River to honour the river goddess Phra Mae Khongkha, and fill the sky with glimmering sky lanterns, which float over the city like swarming, phosphorescent jellyfish. Accommodation is at a premium at festival time, but the mass lantern release at Pratu Thapae and on Nawarat Bridge is one of Thailand’s greatest spectacles.

Also make time to eat like a Lanna. Rice, as you might expect from the kingdom of a million rice fields, is the foundation of Lanna cuisine, but northern Thai cooks eschew seafood and coconut milk in favour of fiery chili-based dips and aromatic, meaty curries flavoured with lime leaves, tamarind, galangal, coriander root and turmeric. Seek out gaeng hang lay (pork curry with tamarind) and other signature dishes at northern Thai restaurants such as Tong Tem Toh on Nimmanhaemin Soi 13, and Huen Phen on Thanon Ratchamankha.