City on a Plate: Bangkok at its Best, From the Dynamic Duo Behind Bo.lan 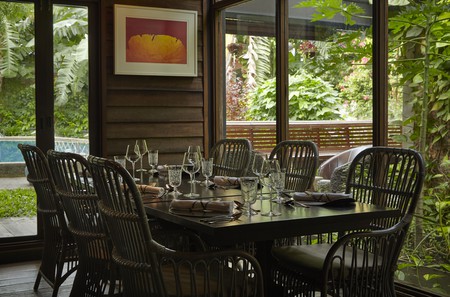 Culture Trip talks to the world’s most talented chefs about the cities that inspire them and the sights, smells, and sensations that drive their approach to food. For over a decade, Bo Songvisava and Dylan Jones have been lighting up Bangkok with their sensational, sustainable, and traditional Thai cuisine – now, they want to show you what they love about the Thai capital. 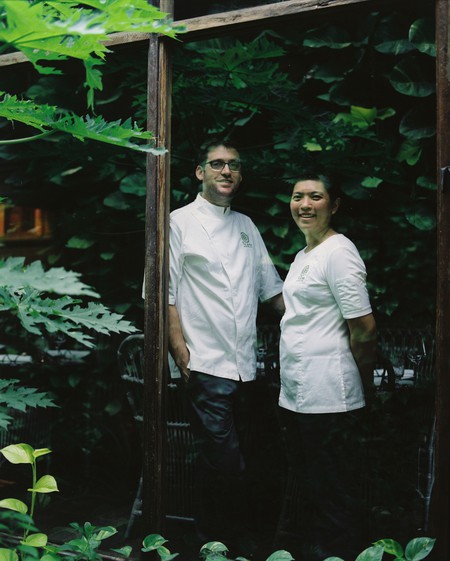 Bo Songvisava and Dylan Jones – the duo behind Bo.lan. | Courtesy of Bo.lan

There are few places on earth that celebrate Thai culture with the vigour and spark of Bo.lan. This pioneering Bangkok institution, which has stood out in the Thai capital for over a decade, is led by Bo Songvisava and her husband, Dylan Jones. Bo.lan is credited with having given rise to the emergence of contemporary Thai cuisine, but that categorisation misses the point just a touch. While the training and service are perhaps more modern and Western than other counterparts in the city, the cuisine is rooted firmly in the history, geography, and celebration of Thai culture; indeed, the ethos is so rigorously traditional that some Thais leave Bo.lan learning more about their national cuisine than they knew going in.

Bo and Dylan’s story is straight from the silver screen; two young and eager chefs learning under the master of modern Thai cuisine, David Thompson, who fall in love over the oven stoves, head to Bangkok, and strike out on their own to tremendous success. But that success is attributable, in large part, to the strength of their partnership, and their shared passion for what Thailand really has to offer. Bo.lan goes to extraordinary lengths to source the highest quality, most ethical, and most diverse produce that you can find – everything the chefs cook with is Thai, sourced from small-scale farmers, and as close to pure as it’s possible to get. What’s more, the restaurant has an absolute commitment to mitigating its carbon output with a myriad of ecological processes and initiatives: from upcycling cooking oil into kitchen soap, to maintaining a kitchen garden fed with food waste compost, to re-pressing its receipts and paper scraps into new menus and cards. 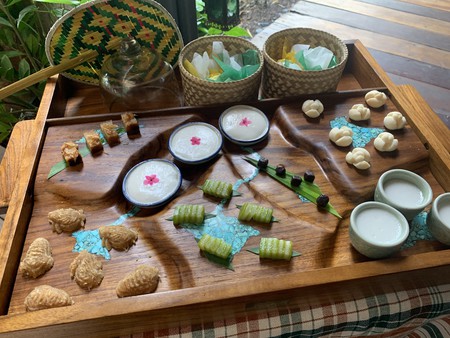 Bo.lan’s menu is served all at once, to be shared in the family style customary of Thai home life. | Courtesy of Bo.lan

Dinner at Bo.lan is a radical departure from what you’d usually expect of a Michelin-star dining experience. For one, there’s no elaborate sequence of courses, moving from small to large, sweet to savoury, hot to cold, and back to front in the way that you’d find elsewhere – there are bites and snacks, a bracing glass of Thai whiskey, and then straight to the main event: all five mains served at once, to be shared and picked at as they would in a Thai home, with scoops of sprouted rice available at your beck and call.

These five mains – a salad, a relish, a stir fry, a curry and a soup – change every eight weeks, and draw upon recipes extensively researched from Thai family histories, centuries-old cookbooks, and long-forgotten royal palace menus. Everything is made from scratch (the chefs grind their own pastes and even crack their own coconuts – a surprising rarity even in the countryside) and the heat level is not turned down for tourist palates – so you have been warned.

Culture Trip spoke to Bo and Dylan about chillies, corrupt policemen, and the month-long culinary blowout they’d go on if you told them their last meal was coming up, as they show what they love about the food-lover’s paradise that is Bangkok. 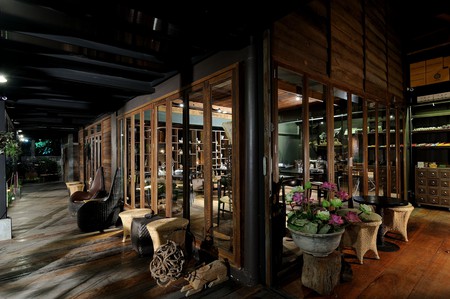 The restaurant is as committed to sustainability as it is to representing the diversity of Thai cuisine. | Courtesy of Bo.lan

We’re Bo and Dylan, we’re from Bangkok, and we cook Thai food.

It’s the little things, really, that make Bangkok. The random acts of kindness, the quirky characters, and, of course, the Tinglish you sometimes hear spoken! It’s a city of juxtaposition and exceptions: just when you think you’ve seen it all, it delights or shocks you (or both).

Take any street in old town Bangkok, for example; especially those streets that back on to the klongs. It’s like walking back in time, and you really get a sense of how much the city has changed and modernised since. But at the same time, you see the things that haven’t changed – the old shop fronts on those streets with little hidden gems tucked away along them; where you can get a bowl of noodles with chilli relish, still made entirely by hand the way it always has been, and always should be!

Bangkok as a city is much like Thai food itself – the flavour of our city isn’t one-dimensional; it’s layered and multifaceted. It’s hot, sweet, salty, a little sour, and at times, bitter! One thing we can’t find the same elsewhere is chilli, though. Yes, it’s available almost everywhere on the planet, but somehow, the flavour and fragrance of the chillies here are different, more intense, and a whole lot more powerful. Chilli, fish sauce, and palm sugar are the three things that taste best here; preferably all together! 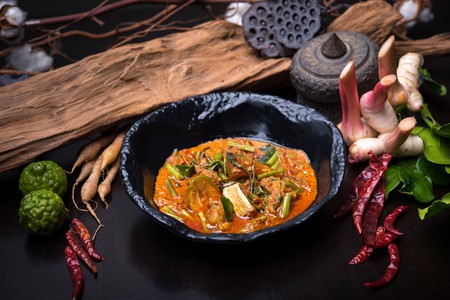 Bo.lan’s food is unabashedly spicy, so make sure to let your waiter know if you can’t hack the heat. | Courtesy of Bo.lan

Well, we hate traffic jams, we hate the corrupt cops who cause traffic jams, and we don’t care too much for poorly-behaved tourists. But what we love, what makes our life, is food. Bangkok is a food-crazed city; you can’t walk half a block without stumbling across something edible. When Bangkokians are eating lunch, they are almost always talking about what to have for dinner! The city’s food scene is never stagnant, and – like its more sinful side – caters to every taste, if you know where to look!

This is such an annoying question… if we knew it was going to be our last meal, I’m not too sure we’d have much of an appetite! Also, if we knew our impending death was coming, why limit it to just one meal? What we’d do is make a month of it, eating at all our favourite places one last time, and travelling the country to get one last hit of each region and what it offers. Maybe then we’d be ready to call it quits.

This is a tough one; can we pick two? The first would be our Phat Grapow, because it’s deceptively simple yet complex at the same time. Also, the egg we serve it with is always just one poke away from exploding all over your plate. Or maybe the Nahm Prik – it’s intense, fiery and complex, and requires a huge variety of vegetables in it to work: it’s a dish that’s all about diversity and inclusion. And chilli. 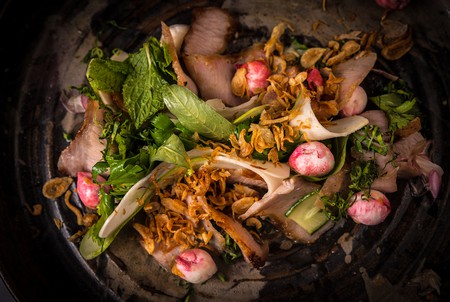 What appears to be a straightforward salad can have dozens of components, each chosen to enhance the final experience. | Courtesy of Bo.lan

Bo Songvissava and Dylan Jones are the owners and head chefs of Bo.lan, a one Michelin star fine dining restaurant in Bangkok, Thailand. Keep up with them on Instagram.