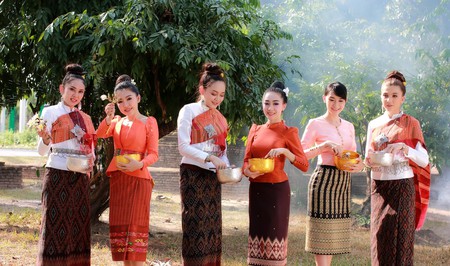 Chut Thai translates as “Thai outfit” and it is the traditional clothing worn in the Land of Smiles. There are many types of chut Thai, with more modern types used as the nation’s official clothing. Learn more about Thailand’s gorgeous traditional dress here.

Traditional Thai clothing through the ages

In Thailand’s past, men and women both wore a cotton or silk wrap-around garment called a chong kraben. Tied around the waist and wrapped similar to a loose loincloth, men wore theirs short to the middle of the thigh, while women covered to around the shin. It was normal for both men and women to be topless in times gone by.

During the Rattanakosin era (1782-1932), Thai clothing preferences changed a lot. Some elements of Victorian fashion were incorporated into Thai dresses and stitched garments became more popular than wrap-around items. Western fashion became mainstream in Thailand, and females were encouraged to wear skirts rather than wrapped pieces of cloth. In the early 1940s, public dress codes were introduced with an aim of making clothing more modest. 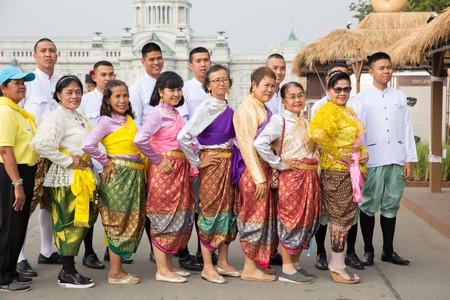 The popular Thai period drama, “Love Destiny”, features many stunning examples of traditional Thai dresses. The costumes, story lines, settings, and overall sense of nostalgia have proved to be a huge hit with the Thai public. 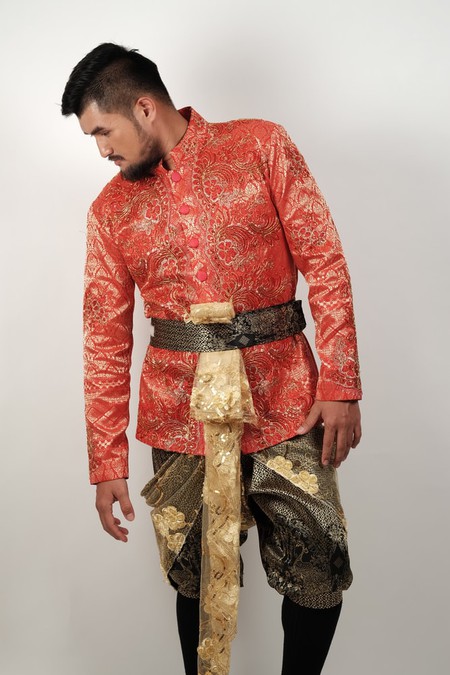 The full name of Thailand’s national clothing is chut Thai phra ratcha niyom, often abbreviated to simply chut Thai. The name means “Thai dress that has been royally endorsed”. Although it is the nation’s official costume, chut Thai doesn’t have that long of a history.

Many items that appear in the different types of chut Thai have been worn by Thai people for many years. As an official costume, though, chut Thai for women was only born in the middle of the 20th century. Queen Sirikit, wife of Thailand’s late King Bhumibol Adulyadej, was responsible for the establishment of chut Thai. She realised on official overseas visits that Thailand needed a modern national outfit for use in formal settings. Having researched royal dresses throughout history, several designs were created.

The national dress for men was developed by a team of royal tailors in the late 1970s, designed for the King to wear at formal functions. 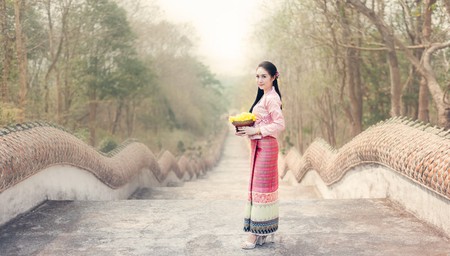 There are several types of chut Thai for women, each comprised of different styles, garments, patterns, and accessories. Some outfits can be worn at any formal occasion, while others are typically more associated with particular events.

Ruean Ton is the most casual national Thai outfit for women. It is generally worn for non-official functions where a smart standard of dress is required. There is a long, tube-style skirt, known as a sinh, and a long-sleeved collarless blouse. The skirt may be patterned or plain, often with a band of embroidery at the bottom, and there are several regional designs.

Chakkri has a long tube skirt (sinh) with two front pleats. The upper garment, known as a sabai, is an elegant shawl-like item that wraps around the upper body and trails to the ground at one side. It covers just one shoulder. Although the length of fabric could traditionally be worn on its own, it is customary today for people to wear another piece of cloth underneath the wrap. The sabai was a popular piece of clothing in the past but was banned in Thailand for everyday wear in the middle of the 1900s by the same prime minister that changed the nation’s name from Siam to Thailand. The fabric for chut Thai chakkri is often made using a traditional weaving technique called yok, which results in a thicker finish. It’s also common for fine threads of gold or silver to be incorporated into to the luscious clothes.

Siwalai is a type of formal evening attire that is often worn at royal ceremonies. Interestingly, the name “siwalai” is a corruption of the English word “civilised”! The one-piece gown is made from two separate items sewn together: a tube skirt with two front pleats and a round-necked blouse with elbow-length sleeves that buttons up the front or the back. Brocade adds a more elegant and high-class appearance, and the outfit is finished with a sabai draped over the shoulder. 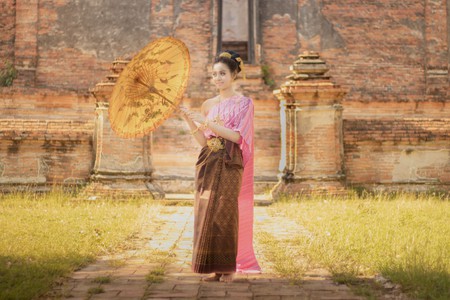 Boromphiman is very similar to siwalai except for the shawl-like sabai. Otherwise, the dress, made from a lavish blouse and skirt sewn together, is the same. It can be worn for formal and semi-formal functions.

Chitlada is used as formal ceremonial wear for daytime events. It comprises a long sinh with brocade embroidery at the bottom and a long-sleeved silk blouse with ornamental buttons at the front.

Amarin makes an appearance at formal evening events. Fairly austere in its appearance, amarin features a long sinh and a broad, almost square-like, long-sleeved blouse with a round neck and buttons all the way up the front to the throat. No belt is needed and the garments are not particularly fitted and do not show the shape of the body much.

Similar to chakkri, chakkraphat is usually thought to be more formal and modest than its counterpart, usually worn at royal ceremonies. As with other types of chut Thai for females, it features a long tube-like lower garment. The upper part of the body is wrapped in a luxurious shawl, with one shoulder left bare. The fabric is often thick and rich with lots of detailed embroidery. The name translates as “emperor”, so it’s easy to see why this is one of the most elegant and formal types of chut Thai for women.

Dusit is a fairly Westernised form of national Thai dress, often worn at international events and less-formal evening functions. The silk dress has a round neck and no sleeves and it reaches almost to the ankles. It is often worn with a belt to add greater definition to the waistline. 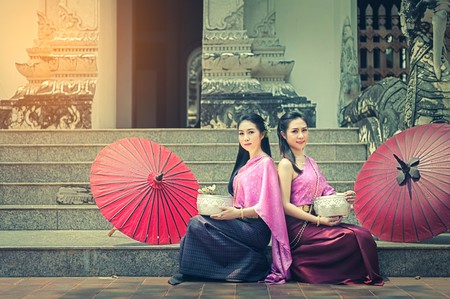 Although there are various traditional outfits worn by men, there is only one formal male national outfit. Known in Thai as suea phraratchathan (“royally-bestowed shirt”), the shirt is fastened up the front with buttons, has a long collar, and can have sleeves of any length. Long-sleeved shirts are generally worn with a sash; this is the most formal type of suea phraratchathan. It is usually worn with Western-style suit trousers and a suit jacket may be added to the outfit for a greater degree of formality. 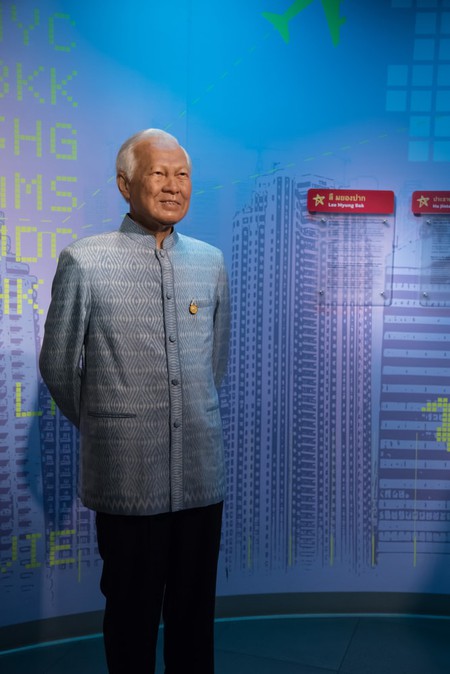 Formal chut Thai is used by royalty at official functions and many Thai people choose to wear variations of traditional and national dress on their wedding days. Cultural performances usually include chut Thai and people may wear formal Thai outfits for other special occasions, such as for celebrating Thai New Year (Songkran) and attending graduation ceremonies. Interestingly, beautiful clothes for females are often left as offerings at shrines for female spirits too.