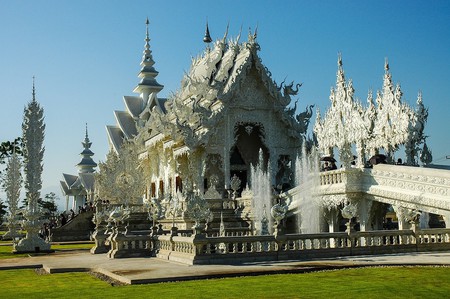 Chiang Rai is often overlooked by tourists in favor of its similarly named neighbor Chiang Mai. However, this Northern Thai city has plenty to see and do, and is far less crowded. We investigate ten sites that convey the area’s rich and fascinating culture. 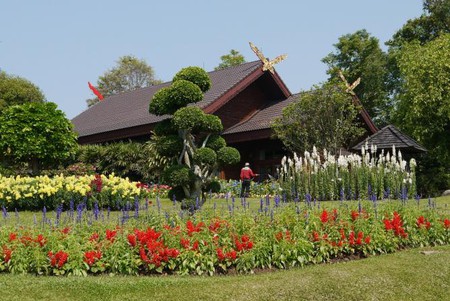 The main reason that many tourists come to Chiang Rai is to visit this unique temple. Painted white and covered in a mosaic of mirrors, Wat Rong Khun (also referred to as the White Temple) is a blend of fantasy and tradition decorated with a mix of Buddhist images and cartoon aliens. The outreaching hands at the temple’s entrance are evocative of imagery of hell, and are said to represent desire. In a nearby tree Batman’s head spins in the breeze. Construction started in the late 1990s and the work is still on-going. Local artist and architect Chaloemchai Khositphiphat, who designed the temple, believes that it will take 90 years to complete his vision. Plans are in place for a team to continue the work after his death, with a total of nine buildings planned. For now, he can be found working on his creation most days.

Bandaam Museum is sometimes known as the Black House. Created by Dr Thawan Duchanee, the collection of buildings is far less opulent than the White Temple, yet Bandaam Museum exudes its own unique appeal. From the exterior, this collection of dark wooden buildings has a traditional Thai feel, with ornate wooden carvings and Buddha statues. A closer look reveals decorations created with animal skins, skulls, and an entire elephant skeleton. The atmosphere is slightly unnerving and there is even a torture chamber in one of the outlying buildings and black swans around the lake at the bottom of the garden. Duchanee hoped to create a space that shows the darker side of human thoughts and actions.

A favorite with local residents, this waterfall and hot springs is located 14 kilometers outside Chiang Rai and has a rustic atmosphere which is a big part of its charm. The small park is made up of two concrete bathhouses with private sunken tubs and an outdoor pool, with spectacular views in the evening as the sun sets . The hot stream twists its way through the buildings and the venue contains a small restaurant for its visitors’ convenience. All the signs are in Thai so it can be hard to find, but with an entrance fee of only 10 baht to use the pool and 20 baht to get your own room it’s worth the effort.

Chiang Rai’s golden clock tower is another offering from Chaloemchai Khositphiphat, sitting at the center of a roundabout in the middle of the city. An equally lavish creation, albeit on a smaller scale, it is best viewed in the early evening when the tower comes to life in a ten minute light and sound show. Traditional Thai music plays and the monument turns from gold to all the colors of the rainbow. In spite of the stunning aesthetics displayed, the city doesn’t stop for this performance and the continued roar of rush hour traffic winding around the tower makes an interesting contrast. The performance happens every evening on the hour between 7pm and 11pm.

Established in 1977 by HRH the Princess Mother, Mae Fah Luang Art & Cultural Park originally opened as a camp to provide young leaders of hill tribes with the necessary skills to run development projects sponsored by the royal family. Today it houses an impressive collection of Lanna artifacts, on display to protect them from being purchased by antique collectors for private ownership and leaving the region. Highlights include the teakwood exhibition and the Haw Kham golden pavilion which houses the 19th century Wiang Ta murals – tempura painted panels that depict the stories of Buddha and the Lanna way of life.

A venue with a focus on modern art, this gallery space was founded by Angkrit Ajchariyasophon who wanted to provide residency space to alternative art forms. The gallery first opened its doors in 2008 and since then has hosted a range of events from art exhibitions to film screenings to talks. Priority is given to up and coming artists who have never been exhibited before, giving them the opportunity to gain exposure. Angkrit Gallery also brings together collections of works by internationally renowned artists who wish to display their work in new settings.

This European style park was created by the royal family to offer the opportunity to experience the flora of milder regions to those who often don’t get the opportunity to travel. Built on the site of a village that was once central to the opium drug trade between Thailand, Myanmar, and Laos (the Golden Triangle), it was intended to bring harmony to this troubled region. In fact, the Princess Mother was so invested in the area that she built a Swiss style chalet on the hill above the park, known as the Doi Tung Villa, to serve as her summer residence. This house is also worth a visit, especially the mail hall which has a ceiling decorated with a map of the stars and the 12 zodiac signs.

The indigenous populations of Northern Thailand have been part of the region for centuries, but exploitation for the tourist dollar means that it can be hard to know if your visit is ethical. The best way to get an understanding of these fascinating tribal groups is to arrange a visit with the education center in town. Set up in association with the Population and Community Development Association (PDA), this display gives insights into the traditional way of life and works with a number of communities including the Karen, Akha, Hmong and Lahu people. Their daily tours to visit the hill tribes are enlightening and respectful, with profits being invested back into the communities.

Combining his international training in Japan, Laos and Cambodia with a feel for his homeland, Somluk Pantiboon creates pottery in his studio and gallery on the outskirts of Chiang Rai. Using natural glazes produced from rice, bamboo, ash and wood through a chemical-free process, the ceramics have a pleasing rustic look to them and are practical as well as decorative. A visit here allows you to watch the locally trained potters at work – Pantiboon has set up an apprenticeship program and oversees the pottery. He is very happy to discuss his work and local crafts with visitors.

The Khua Silapa (Art Bridge) Project was launched at the start of 2013 to provide a new art space for the city with the aim of making connections. Many prominent artists from Chiang Rai, including Angkrit, Pantiboon, and Kositpipat, were involved in the planning and creation of the center which comprises an art school, exhibition space, studios, and shop. The community will welcome visiting artists, help local artisans market their work and improve their skills, educate Thailand’s younger generation and allow tourists to soak up the best of Chiang Rai’s art scene. The project is an ambitious one, but it is already winning praise from critics as a shining example of how to provide a nurturing environment for emerging talent and local creativity.