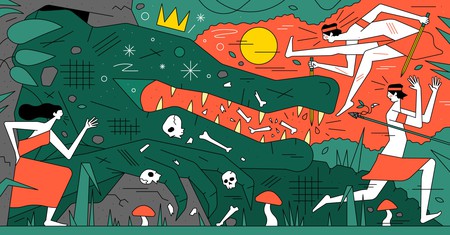 If you visit Phichit Province in the lower part of Northern Thailand you’ll surely spot many crocodile statues and images. They honour Chalawan, the fearsome Crocodile lord of local legends and lore. Learn more about Thailand’s Crocodile King and the connection with a Thai king of times gone by.

Local folklore in Phichit tells a tale about a man called Krai Thong and Chalawan, the Crocodile King. Chalawan is said to have lived in a magical and beautiful cave, along with his two wives and various other crocodiles. All crocodiles who entered the lair were transformed into humans, and could take both crocodile and human form as they wished. 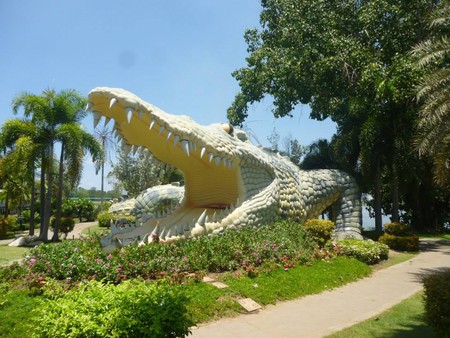 Chalawan was aggressive and power-hungry and he craved dominance. While his predecessors had lived by Buddhist principles, Chalawan had a desire to eat humans. The local people feared the waters because of rumours about crocodiles hunting people. Parents warned their children to stay away from the canal, but two children didn’t pay attention.

As two sisters were playing in the water, Chalawan emerged, ready to taste blood. He was dazzled by beauty, however, and fell in love, abducting one of the sisters into his cave. Changing into his human form, Chalawan attempted to woo the maiden. When she remained disinterested, he cast a spell on her and took her for a wife.

Understandably, the girl’s father was distraught. Believing his beloved daughter to have been killed by ferocious crocodiles, he offered a handsome reward to anybody that could kill the crocodile and return his daughter’s body. Many men tried, and failed. 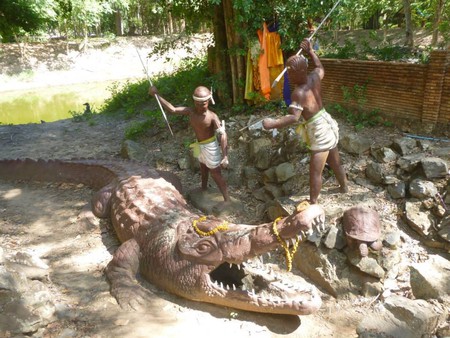 Legend says that word reached Krai Thong, a crocodile hunter from Nonthaburi Province. He made the long journey to Phichit, ready for battle. Casting spells to lure the reptile out of hiding, the man and crocodile fought. Chalawan was seriously injured and retreated back into his cave. Nobody was able to help him. The brave Krai Thong followed the Crocodile King into his underwater cavern, finishing the fight with a fatal blow.

Krai Thong rescued the kidnapped girl and returned her to her family, who were, understandably, shocked and overjoyed to see that she was still alive. Krai Thong was richly rewarded and crocodiles stopped hunting humans in Phichit. The cave is said to have eroded over the years, hiding its splendid beauty.

King Rama II (Phra Phutthaloetla Naphalai) enjoyed this legend so much that he turned it into a traditional Thai play, known as a lakhon nok. There have been many modern variations of the story since then. 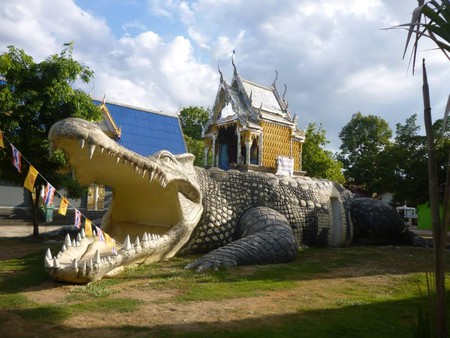 If you dare, you can visit the site of Chalawan’s lair, found within Phichit Historical Park. Statues depict men attempting to spear an angry crocodile. At the lake-cum-swamp of Bueng Si Fai you’ll come across a gigantic open-mouthed crocodile statue next to the water, along with an aquarium, complete with taxidermied crocodiles, and a crocodile farm.

Crocodile statues stand in seemingly random spots around the town, and the town clock has a ring of crocodiles around its base. Large crocodile statues even appear in temples, with some of the most impressive found at Wat Mai Plai Huai.

There are certainly lots of reminders of the fearsome Chalawan around Phichit!