The Top 10 Food Trucks In Bangkok

Bangkok’s street food scene is nothing short of legendary, with tiny roadside stalls and street carts serving up some of Thailand’s best cuisine. Despite the city’s deep relationship with street food, the food truck movement is only just beginning to take roots in Thailand’s capital. Taking a cue from the source of the food truck phenomenon, many Bangkok trucks are focusing on western cuisine, introducing American-style street food to locals and providing a touch of nostalgia for tourists and expats. 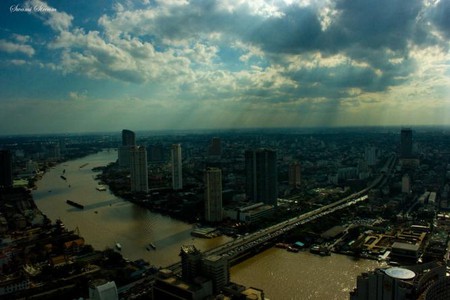 There’s almost always a line-up to the counter of this big black truck with the big juicy burger sign on top. Typically found parked on Joke Bang Lamphu, near Bangkok’s popular backpacker ghetto, Khao San Rd, Mother Trucker is known for its large 150g patties. Diners can choose a ‘Mother of Beef’ or ‘Mother of Pork’ patty, both of which are served on fresh-baked buns with homemade 6,900 island sauce, arugula, and an onion ring, which gives the burger a distinct crunch. Aussie cheese or bacon can be added, and onion rings can be served on the side.

Credited with starting the new food truck craze in Bangkok, Daniel Thaiger is widely agreed to serve the best burgers out of all the city’s food trucks or restaurants. The menu is simple, the patties are hand-formed, and the ingredients are fresh. The basic Thaiger Burger, which can be made with a pork or beef patty, is topped with lettuce, tomatoes, grilled onions, and a special Thousand Island sauce called ‘Thaiger sauce’. The hearty Mr. Steve Burger has the same toppings, along with bacon and cheddar cheese or there’s also a pork-and-oat burger with a teriyaki glaze. The truck almost always sells out before closing time. 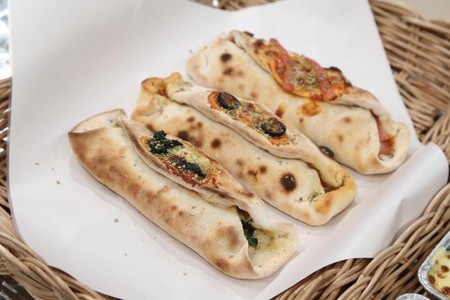 Equipped with an authentic pizza oven, Pizza Aroy has managed to bring wood-fired pizza to Bangkok’s streets. Usually found around Lad Phrao’s Town-in-Town, the truck is decorated with Italian flag awnings, and there are a few plastic seats nearby for diners. The truck uses simple, imported Italian ingredients to make 12 inch pizzas, which come with a choice of more than 18 different toppings. In addition to standards like the ‘Magherita’ and ‘Hawaiian’, Pizza Aroy offers a ‘SNACK’z’ menu that includes salmon rolls and ‘pizza sandwiches’, which are composed of two slices of pizza folded into a meal that’s easy to eat on the go.

Restaurant, Seafood
Facebook
Email
Twitter
Pinterest
Copy link
Share
Map View
Summer Street adds a dash of sophistication to Bangkok’s food truck scene with its crisp white truck and hip decorations that would look fitting in a craft brewery. Located near Aree Soi 2, this truck specializes in charcoal grilled seafood, including squid, oysters and prawns. The truck also offers seafood sets, which range in size from small to large, and include scallops, green mussels, and spotted Babylon snails. Seating is offered at the truck’s counter, or beneath several shady awnings set up in front of the truck. Local beers like Leo and Singha are also available, along with a few import varieties.
Open In Google Maps
Bangkok, 10900, Thailand
+66923542692
Visit Facebook page
Give us feedback

Hotdogs & Buns serves up gourmet American hotdogs on homemade buns. The truck only uses high-quality meats, including grass-fed beef and pastured poultry. Hotdog options range from basic beef, pork, or chicken on a bun, to the ‘Chicago’, which comes topped with chopped onions, jalapeno peppers, pickles, celery salt, and tomatoes. Diners can choose from wheat or white buns, and there’s the option to add extra toppings like sauerkraut or chili. The truck also offers corn dogs, which are fried in sweet organic cornmeal batter. The truck can usually be found somewhere between Ekkamai and Rama 4, although they’re also beginning to open some permanent cart locations.

Between Ekkamai and Rama 4, Bangkok, Thailand 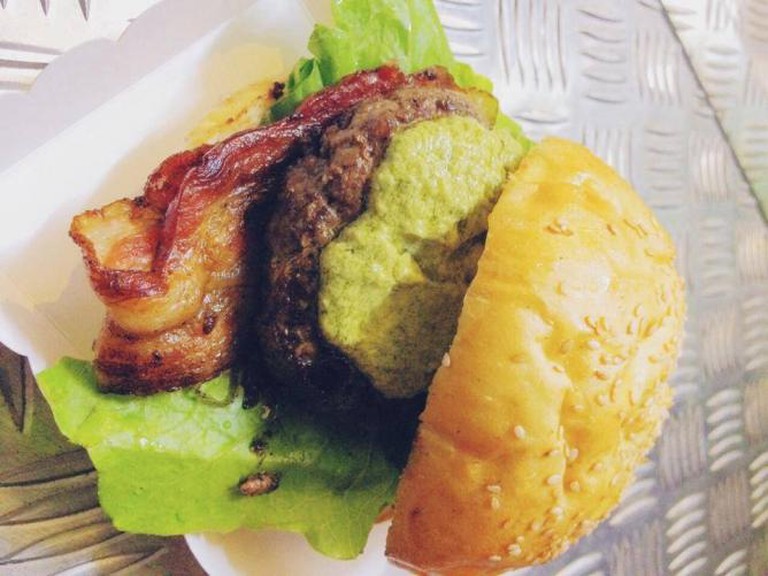 Burger from Orn the Road | Courtesy Orn the Road
Orn the Road is set apart from Bangkok’s other burger-serving food trucks by how its patties are cooked. The patties are grilled over charcoal, giving the burgers a smoky flavor. Run by a woman named Orn and her husband, this bright orange food truck is often parked at Thonglor between soi 11 and 13. The burgers are priced differently based on the grade of the patty, and both beef and pork are offered. Menu highlights include the spicy ‘Bangkok Burger’ made with Thai herbs and seasonings, and the ‘Dixie Burger’ which is topped with a tangy BBQ sauce. Burgers are served with fries on the side, and diners can also add dipping sauces like blue cheese or spicy tomato.
Open In Google Maps
Soi Nana Nuea, Khwaeng Makkasan, Khet Ratchathewi Krung Thep Maha Nakhon, Thailand
Give us feedback

Food Truck, Thai
Facebook
Email
Twitter
Pinterest
Copy link
Share
Map View
Typically parked at Lat Prao Soi 94, Kofuku attempts to recreate the ambience of a typical Japanese izakaya with its paper lanterns and bamboo accents. The focus of this food truck is tonkatsu, a Japanese pork cutlet that’s crispy on the outside and juicy on the inside. The truck also offers other Japanese favorites like gyoza, takoyaki and Japanese curry. Seating is on simple wooden stools around the food truck’s counter, allowing diners to watch their meals being prepared. They’ve recently opened a second truck, which is usually found at Chokchai 4, Soi 37.
Open In Google Maps
8/1-5 ถนน กาญจนาภิเษก, แขวง ศาลาธรรมสพน์, เขตทวีวัฒนา กรุงเทพมหานคร, 10170, Thailand
+66999025455
Give us feedback

Permanently parked in the middle of Siam Paragon Mall, this is one food truck that’s always very easy to find. Inspired by the taco trucks of San Francisco’s Mission district, La Monita is a fully-functional food truck that cooks up Mexican classics. The truck’s speciality is the ‘Paragon Baja Gordita’, a homemade tortilla filled with cheese, fresh salsa, lettuce, signature chile-cream Baja sauce, and a choice of steak, grilled chicken, or shrimp. The truck also offers quesadillas, nachos, tacos, burritos, and Mexican desserts like churros and coffee flan. 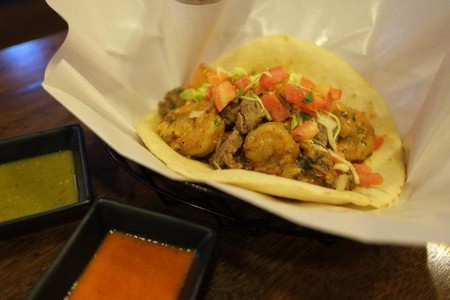