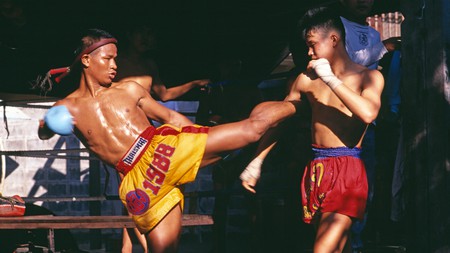 Professional Muay Thai fighters usually start training from the age of six, but people of all ages can benefit from the sport | © Horizon International Images Limited / Alamy Stock Photo

Thailand’s ancient martial art has become Bangkok’s favourite way to work up a sweat. With their elite trainers and authentic traditions, these are the best Muay Thai gyms in the capital, whether you’re a complete beginner or vying for your spot in the ring. 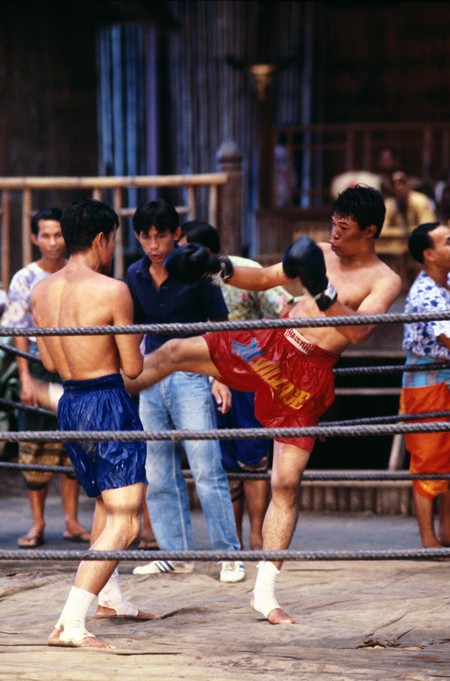 Muay Thai, or Thai boxing, has a long and colourful history in Thailand. What originated as a martial art for the battlefield nearly 2,000 years ago has evolved into a competitive sport that is now practised the world over.

“Muay Thai has become popular around the world due to more television and film exposure, and a lot more promotion of championship fights,” says Grand Master Woody, a former champion who was also cast in a prominent fighting role in the 1974 James Bond film The Man with the Golden Gun.

Today, GM Woody owns one of the top Bangkok gyms, Luktupfah, where he’s witnessed Muay Thai’s image evolve in the public consciousness. Bangkok still draws the world’s top boxers to train at its world-famous camps, but the sport has also boomed as a recreational fitness regime. 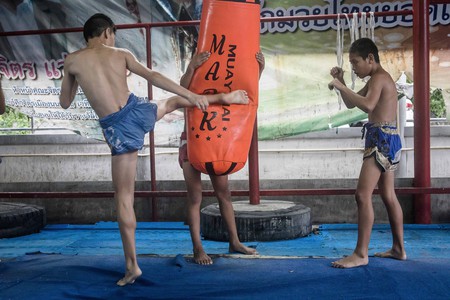 “Muay Thai has a deep history in Thai culture,” explains GM Woody. “Today, all levels from beginners to class fighters are welcome [in the sport], and the majority of people find they enjoy not only fitness benefits, but higher self-confidence, self-esteem, happiness and the camaraderie of being a part of a team.”

Much of Bangkok’s Muay Thai allure is because the trainers at these top gyms have some serious experience under their belts – they’re former championship fighters themselves. This culture of Muay Thai Kru is ingrained in the sport. As fighters become masters of the martial art, they go on to teach new generations, passing on the authentic techniques and culture of Muay Thai. 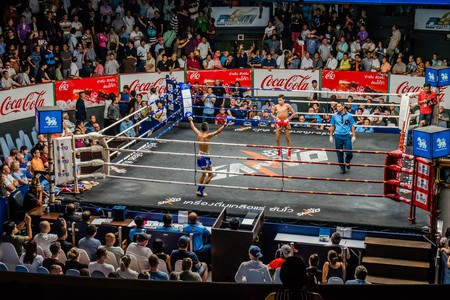 Rajadamnern Stadium is one of the two main Muay Thai stadiums in Bangkok, along with Lumphini | © picturelibrary / Alamy Stock Photo

These contemporary Bangkok Kru are wholeheartedly embracing the city’s new demographic, a diverse mix of both recreational enthusiasts and tourists. Their training regimes still develop Muay Thai’s top competitors from around the country and world, but their programming has been reframed to be accessible and inclusive for everyone.

The team at Petchyindee Kingdom, another one of Bangkok’s top gyms, says that interest in beginner Muay Thai classes has been on the rise for years – especially among women. Today, nearly 80 percent of the gym’s students are a mix of Thai and foreign women. 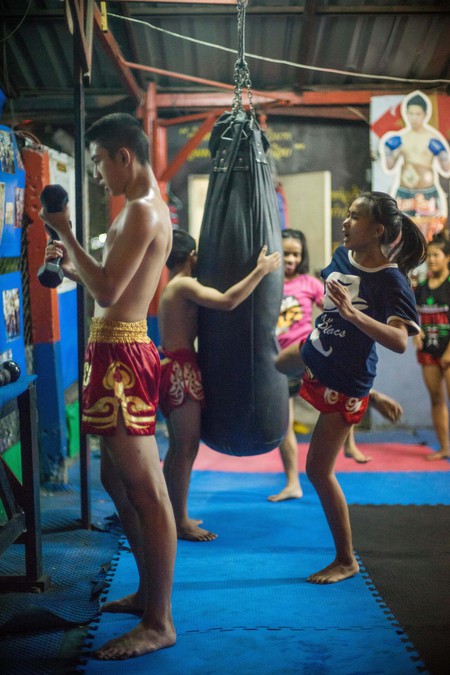 “There’s nothing to be scared about with Muay Thai,” according to a Petchyindee trainer. “Muay Thai is a fighting sport, but it’s also about technique, mental discipline and self-defence to protect oneself. Kru Muay are experienced in teaching the right technique to students of all levels.”

Whether you’re after a spot in the ring or just looking to break a sweat, these Muay Thai gyms in Bangkok are the favourites of the elite. Each offers drop-in sessions along with packaged programs and longer-term training camps, depending on your interest. The trainers not only have years of experience fighting professionally but also teaching. They’re skilled at adapting to the student and their limitations, helping them to practise the sport safely around pre-existing injuries. What’s more, you’re getting the authentic Thai boxing experience, joining a beloved national tradition that spans thousands of years. 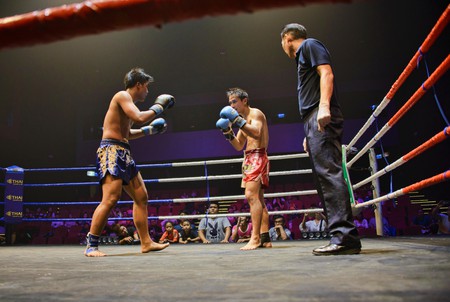 Petchyindee Kingdom has a 40-year history in Thailand. Its impressive roster boasts superstar fighters like Sam-A Gaiyanghadao, winner of multiple Thai titles, and Sagat Petchyindee, whose signature fighting style was developed into a character in the video game Street Fighter. Today, the gym’s passionate siblings, Bet and Boat Yindee, have developed their family’s legacy into a fully immersive training experience suitable for all levels. Located in Bangkoknoi, Petchyindee Kingdom boasts modern facilities, including accommodation, a sauna and a weight room, along with on-site nutritionists and masseurs. Many aspiring amateurs come here to prepare for local competitions. However, with the rising interest of Muay Thai for fitness in Bangkok, especially among women, the gym also offers daily rates and monthly memberships for their recreational classes. Prices start at 500 Thai bahts (£12.60) per class. 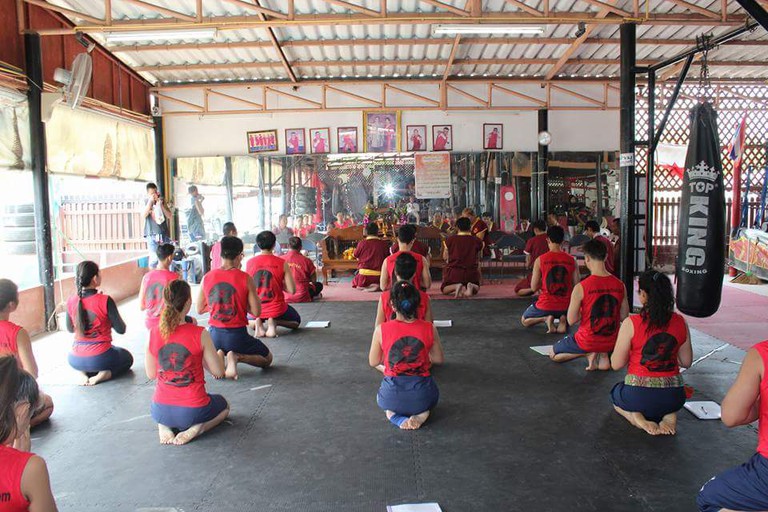 Students at Luktupfah Muay Thai perform a ritual | Courtesy of Luktupfah Muay Thai
With its homestay-like setting in Ket Prawet, Luktupfah feels worlds away from the busyness of Bangkok. The gym is run by GM Woody, a former professional boxer who now trains some of the top Muay Thai boxers in Thailand but warmly invites newcomers to learn the mind-body connection behind this powerful cultural tradition. Along with twice-daily modern Muay Thai classes, the gym also offers technical-focussed Muay Boran classes. Unique to Luktupfah, these classes dig deeper into the ancient styles of Thai boxing from which today’s Muay Thai originated, focussing on special techniques no longer practised in the ring. For those looking to advance even further in the sport, the gym also offers coaching and refereeing certifications. Prices start at 400 bahts (£10) for a drop-in class.
Open In Google Maps
15 Soi On Nut 65, Lane 8, Khwaeng Prawet, Khet Prawet Krung Thep Maha Nakhon, 10250, Thailand
+66813024622
Visit Website
Give us feedback

This ultra-modern and stylish gym lies right in Silom, making it extremely popular among busy Bangkokonians looking for a fun way to stay fit. Legend Thai Boxing focusses largely on beginner-level training – but that doesn’t mean its trainers aren’t at the top of their game, each boasting at least 75 fights under their belt. The studio offers 10 classes a day using the skills, techniques and mentality of Thai boxing to craft dynamic sessions fit for both the burgeoning fighter and the fitness enthusiast. Its MO is to keep classes fun, no matter the level. There’s also an attached massage facility to indulge your sore muscles after a sweaty session. Prices start at 500 bahts (£12.60) for a drop-in class.

Established to promote the sport to a larger audience across Bangkok, Sor Vorapin is a family-run Muay Thai school known for producing top world boxing champions. It is also nationally recognised for its expert trainers – each with more than 15 years of teaching experience in addition to their individual championship accolades. Located in the Taling Chan neighbourhood, Sor Vorapin offers newcomers an immersive experience of the training regime of professional Thai boxers. The trainers adjust each class based on student levels and make sure everyone gets one-on-one time to perfect techniques, ensuring safety and limiting the risk of injury. Prices start at 500 bahts (£12.60) for a drop-in class.

Sor Tawanrung for Muay Thai enthusiasts of all levels

Sor Tawanrung Muay Thai Gym developed as a passion project between two brothers, each with formidable junior careers as fighters in Thailand. Ajarn Dang emerged as a young superstar from a small fishing village in Southern Thailand when he turned his attention to helping his younger brother break into the sport. Dang eventually earned the title of “Best Trainer of the Year” in 2012 by the Sports Authority of Thailand. Today, the siblings run their gym together in a new and revamped location near Phothalai Leisure Park in Lat Phrao. While the duo still trains top champions, the gym’s expanded facilities now also cater to enthusiasts of all levels in both extended camps and single-day sessions. The brothers believe that the qualities learned in Muay Thai can be transferred to enhance everyday life, and they aim to share these lessons with anyone who wants to learn. Prices start at 500 bahts (£12.60) for a drop-in class.

Samart Payakaroon Gym for puritans who want an immersive experience

Samart Payakaroon is widely regarded as one of the most talented and accomplished Thai boxers of all time. The champion fighter tallied a remarkable record throughout his Muay Thai career – and even transformed his fighting style to compete as a formidable force in Western-style boxing as well. In his gym in Sai Mai, Samart Payakaroon now trains students of all levels from across the globe. His approach is puritan. The Thai-style camp prides itself on emphasising the culture and language of Muay Thai, along with physical and mental training, making for an immersive experience whether you’re dropping in the ring for a day or staying for a while in the on-site accommodation. Prices start at 600 bahts (£15.10).