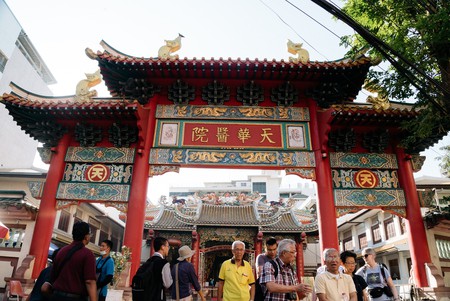 King Rama I found land on the eastern banks of the Chao Phraya River suitable for a palace. There was only one problem – the land was occupied by a large, thriving Chinese community. On the king’s request, an entire village was moved over to the Sampeng Canal. This area is now known as Bangkok’s Chinatown, where you’ll find one of the liveliest shopping areas in the entire city.

Walk down Thanon Ratchawong and you will hit a wave of stores selling the most miscellaneous of items. Fake fruit, Pokémon pillows, bags, backpacks, and every other item you probably never need to own can be found here. Everything is incredibly cheap along this first shopping strip, and bartering is accepted. 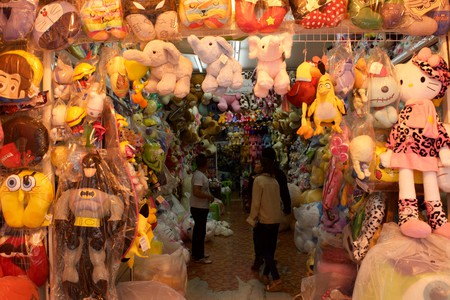 In-between the Chao Phraya River and Yaowarat Road are loads of alleyways, each one dense and filled to the brim with eclectic items. If you are on Thanon Ratchawong, you will find a few side streets worth meandering down. It is here you will find entire stores dedicated to beauty products, selling everything from fake eyelashes to makeup. 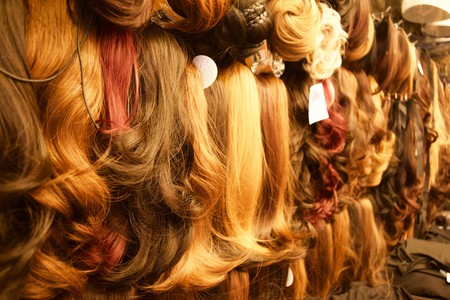 Fake hair for sale in Chinatown | © Courtesy of Kelly Iverson

Many of these stores sell things in bulk, so you can purchase a pack of ten or so items at a discounted price. These are perfect if you are on the hunt for picking up souvenirs for your friends and family back home. For those shoppers feeling extra crafty, there are plenty of shops selling both beads and bands, so that shoppers can create their own souvenirs. 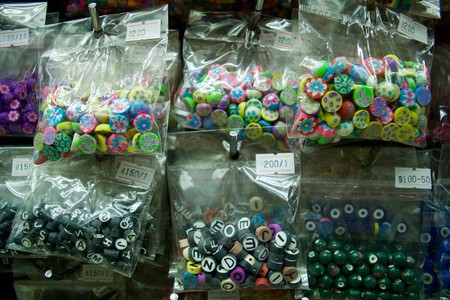 Beads for sale off Thanon Ratchawong | © Courtesy of Kelly Iverson

This shopping arena provides shoppers a refreshing indoor break from the madness right outside its doors. The mini mall, if you will, is only made up of two floors. The first floor is selling fake hair, hair accessories, jewelry, and perfume. The second floor is made up of only stuffed animals and a few pillows here and there. 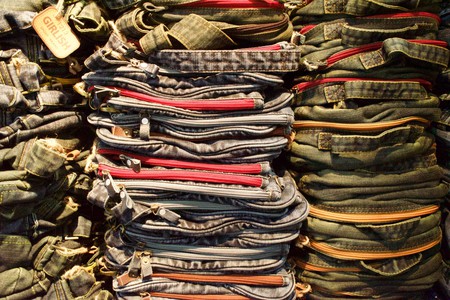 Denim bags for sale in Chinatown | © Courtesy of Kelly Iverson

ThaiDee Plaza sells loads of jewelry and accessories for incredibly cheap prices. From denim bags to key chains, this plaza is well worth sauntering down. It is incredibly small, but it is less crowded than the streets right outside its air-conditioned doors. There is a seemingly random coffee shop just within this plaza, so grab a cup of coffee to refuel before heading out to continue your shopping spree. 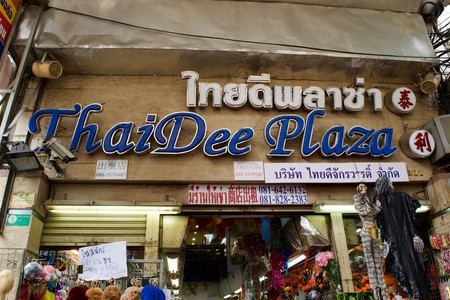 On the same side of the street as ThaiDee Plaza is Sampeng Grand Plaza. There are a plethora of colorful, bright wigs just inside its doors, and wallets splattered with bright anime characters greet customers out front. Those on the hunt for body jewelry will find it here, including nose and belly button rings. 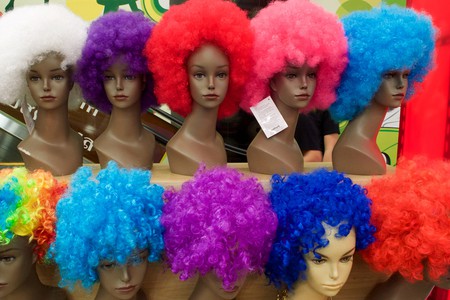 This alley is a bit bigger than the previous ones. It is across from the Grand China Hotel, one of the best spots in the city for a rooftop cocktail. Before heading for a drink, however, don’t forget to pick up some jewelry at Sampeng Square. 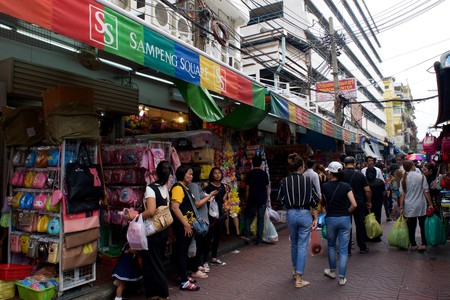 Gaudy gold gleams at every other shop off Yaowarat Road. In addition to its plethora of bling, there are also many Chinese-oriented souvenirs, including teapot sets, strange herbal remedies, and more. 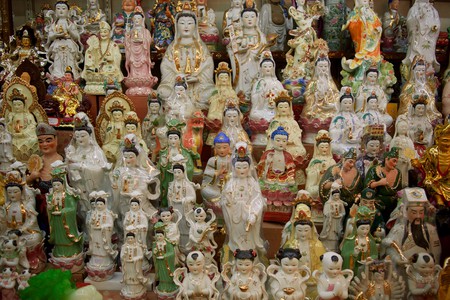 About a 5-minute walk from Yaowarat Road is Mega Plaza. This plaza has the most random assortment of goods, with guns to children’s toys sitting adjacent to one another. Other items found in Mega Plaza include memorabilia, gaming systems (both used and new), flying helicopters, and more. In case you work up an appetite and do not feel like downing your lunch in Bangkok’s brutal heat, there is a food court located inside of Mega Plaza. 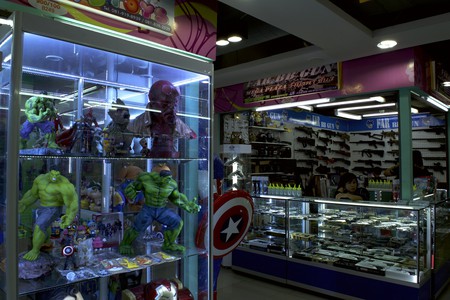 From Mega Plaza, you will find Old Siam Walking Plaza just a short walk away on the corner of Burapha Road and Phahuratm Road. The building is many shades of yellow and the structure looks European. A garden of sorts protrudes from the roof, with pink flowers providing a nice contrast again the otherwise all yellow mall. Colorful, decorative tile is found on the surrounding walkway of the Old Siam Walking Plaza, making visitors feel as though they have left Chinatown altogether. The plaza is busy, but not with foreigners, making the experience feel that much more authentic. 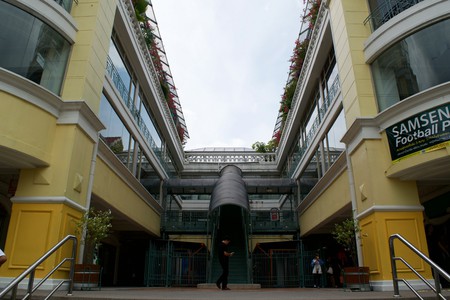 This indoor market of sorts sells everything from clothing to oil paint and canvases. Enjoy all of the market prices without the heat of one, but be prepared for an equally pushy crowd through these narrow walkways. Prices protrude from the top of vendors stalls. There is plenty of food found on the ground floor among the clothing and goods, and if you do not mind spending a little more, there is also a Cafe Amazon and other chain food restaurants throughout. The majority of the foods are desserts, so those with a sweet tooth will certainly enjoy meandering through and exploring this plaza. 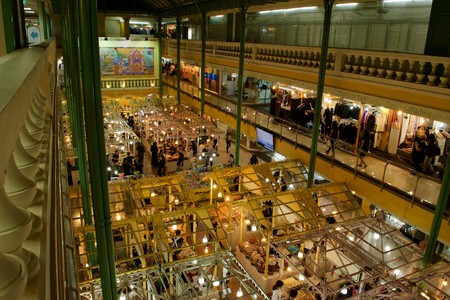 There are a few ways to get to Chinatown in Bangkok. The easiest way is to simply get a taxi. Most drivers should know where Yaowarat Road is. The second and more interesting way is to get there by boat. To get to a pier, take the BTS Skytrain to station Saphan Taksin. From there, take exit one to get to the pier. The pier closest to Chinatown is Ratchawong Pier, which is only three piers down from the BTS Skytrain.

The best time to go shopping in Chinatown is during the day, as most of the shops and vendors shut down at night and Yaowarat Road comes alive with an abundance of food.