A Cycling Guide to Bang Krachao in Bangkok 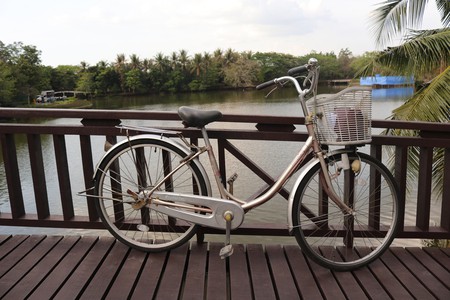 Bangkok can certainly be an intimidating city. With so many people and so much pollution, visitors often need a few hours’ escape from the city. Fortunately, there is an island perfect for tourists sick of the city. Escape to the quaint island of Bang Krachao and enjoy cycling around, with our guide. 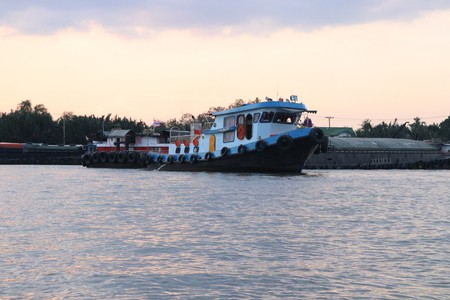 The ferry to Bang Krachao | Courtesy of Kelly Iverson

What is Bang Krachao?

Dubbed the green lung of Bangkok, there isn’t a more appropriate name for this picturesque patch of land. The island is criss-crossed with frighteningly skinny paths, some so thin that cyclists will have to jump off their bicycles so as not to end up in the bushes! 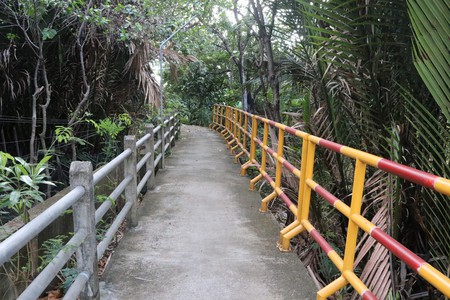 The narrow paths of Bang Krachao Courtesy of Kelly Iverson

Bang Krachao is located in the province of Phra Pradaeng, on the murky yet mighty Chao Phraya River. The island, Bangkok, lacks any major development. Except for a few charming cafes, a modern home or two, and the very occasional hotel (really only one major one), Bang Krachao certainly lacks urban development and is unlikely to see any expansion in the near future, either. 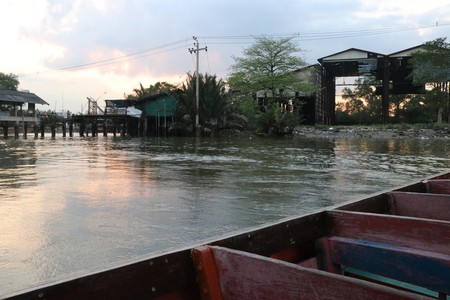 Helpful hand-drawn wooden signs make it easy for visitors to cycle from one top sight to the next. The cost of a bicycle will depend on where they are rented from, but you shouldn’t pay more than ฿100 (US$3) for a day.

Top Sights on the Island

The island is surprisingly big, but cyclists can see many of the top sights within a few hours.

The Flower Road is the most beautiful stretch on the island. But don’t let its name fool you: this strip of green path is not home to any real flowers (at least none that we could find). Instead, it is painted with orange, white, red, blue and green flowers on the concrete surface. The path is equipped with railing on both sides to keep cyclists from plunging into the water below. 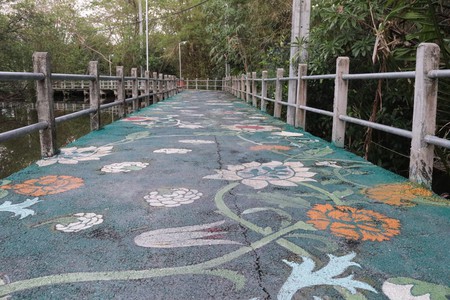 On the weekends, Bang Krachao hosts the Bangnamphueng Floating Market. 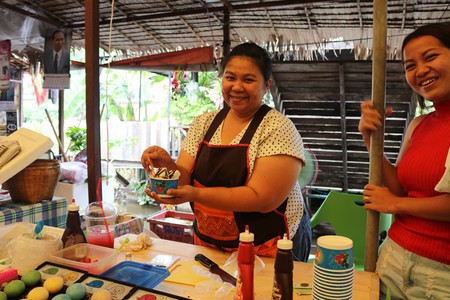 It’s not the type of floating market tourists are used to seeing in guidebooks. Instead, this market sits beside the thin canals that weave through the island. Most vendors are situated on the land. The market doesn’t get many tourists, which is a nice change from the onslaught in many of the capital’s markets. There is everything you need here to occupy you for an hour or so: delicious Thai cuisine, sweet and refreshing desserts, and homemade goods, including body wash and shampoo. You can also try the vibrant orange gac fruit, which is not common in Bangkok. 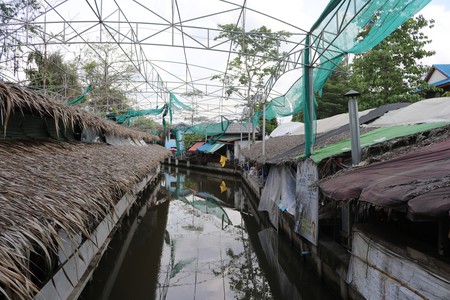 The ‘floating markets’ of the island. Courtesy of Kelly Iverson

Visit the Sri Nakhon Khuean Khan Park and Botanical Garden, a lush park flourishing with foliage and families coming to share an afternoon picnic. A number of lakes dot the small park, each surrounded by green palm trees hanging lazily over the water’s edge. A map near the entrance labels some of the top sights in the park, including bridges, a gazebo, a bird watching tower, and more.

Make a pit stop at the Bangkok Tree House. Though everything on the menu is enticing, the fresh teas — everything from butterfly pea to roselle — are sure to rehydrate after an afternoon of exploring. 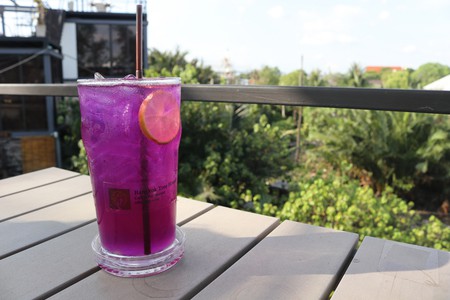 The Bangkok Tree House is also a hotel. Environmentally friendly guests will be pleased to hear that this hotel is incredibly green, doing things like air drying the laundry rather than using a machine. Rooms start at ฿3,900 (US$114) and come with amazing views of this unique island. 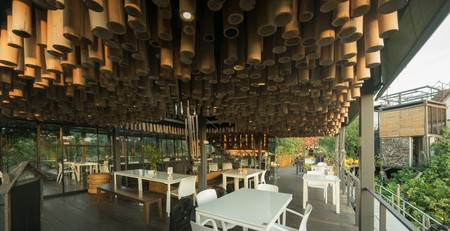 There are nine temples on Bang Krachao, as well as a number of spirit houses. Locals will make offerings and pay their respects to the guardians of the land. Though many Thais are Buddhist, such practices are actually animist. 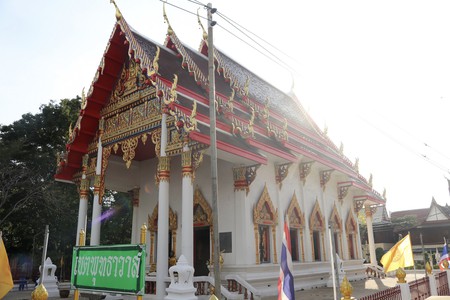 Bang Krachao is fairly easy to get to. First, take the BTS Skytrain to Bang Wa station. From there, get a quick ฿20 (US$0.60) motorbike taxi to the pier. The boat to the island costs only ฿6 (US$0.18). There are several piers on the island to hop off at, but try to choose one that seems busier so you don’t have to walk too far to rent a bicycle.