A Crash Course In Thai Cuisine 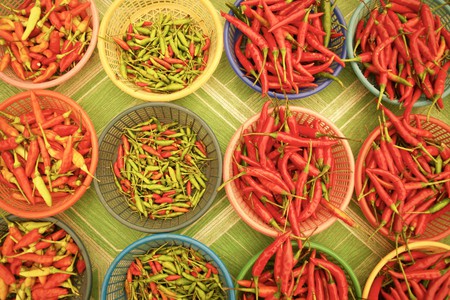 Thailand is a top contender for some of the world’s most delicious food. Regardless of how much time visitors spend in the Kingdom, thanks to the plethora of options there’s the possibility of never having the same meal twice. That being said, many tourists find their favorite dishes, from noodles to curries to seafood, and end up never wanting to let these dishes go. From dining etiquette to every flavor your palate could possibly detect, here is a crash course in Thai cuisine.

It may take a meal or two to become comfortable with family-style eating in Thailand. It’s not normal for a group of Thais to individually order their own, separate meal. Instead, one person will take the reins at the table and in one, sweeping gesture, will get the joint decision of an order and tell the waiter or waitress. The main dishes are brought out and put at the center of the table. Each person has their own plate and silverware, and people are free to help themselves to the delicious food throughout a meal. It’s fairly common to sit on the floor, as well, and meals are put on a mat to be shared. 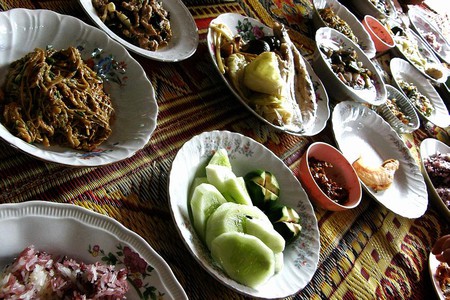 Most Thais eat three meals a day, though it is very common to see people snacking almost all of the time. It is hard not to, as there are so many vendors and stalls selling bite-size, on-the-go snacks in the streets of Thailand. Lunch and dinner foods can easily be substituted as breakfast. Grilled chicken, pork skewers, and pork balls are popular choices for the first meal of the day. Different variations of an egg is another popular dish, as it can be cooked up promptly on the side of the road and makes for a filling dish. Many Thai people have breakfast on their way to work, so eating a meal that is both quickly served and easy to eat is a must. 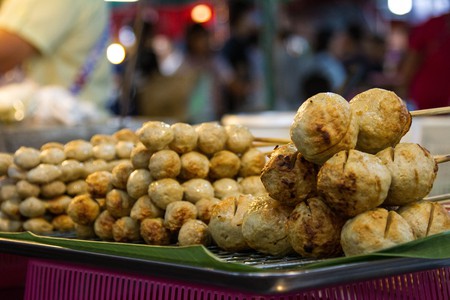 For dinner, it’s not uncommon to see family-style meals served with some type of alcoholic beverage. A favorite beer amongst Thais and tourists alike is Chang, meaning elephant. You’ll also see groups of people at a table with Thai whiskey, such as Sang Som, acting as the centerpiece. Glasses are brought for each person along with a tub of ice and a few cans of soda. The liquor is shared amongst those at the table. 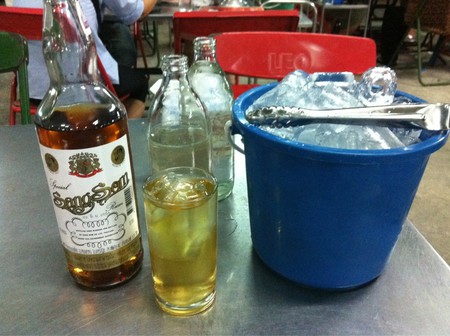 Chopsticks are usually used when eating noodle dishes. All other dishes are eaten with a spoon. Unlike many Western countries, it’s much more common to use a spoon as the main utensil. The fork is only used to push food onto the spoon. 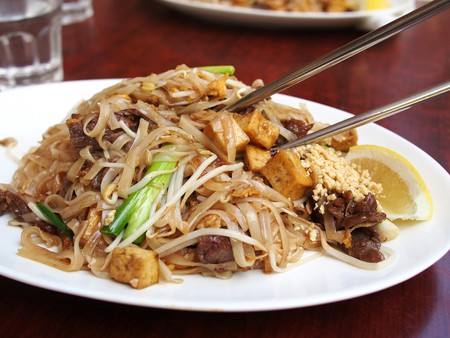 Thais do not normally tip at vendors or street side eateries and shops. At restaurants, however, it is normal to allow the server to keep the change when paying a bill or leaving a slight tip. There is usually a seven percent value added tax (VAT) on both food and drink. Depending on the restaurant, there may be a ten percent service charge. Most menus will include the tax at the bottom. 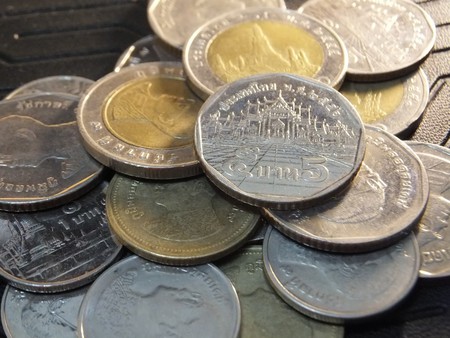 Thai Food Throughout The Kingdom

In general, visitors will be able to find all of Thailand’s unique dishes in almost every region they visit. While some foods are specific to certain areas of Thailand, upscale restaurants and cities frequented by tourists have mastered these supposed region-specific meals. That being said, these specialised dishes are still best eaten where they originate from. 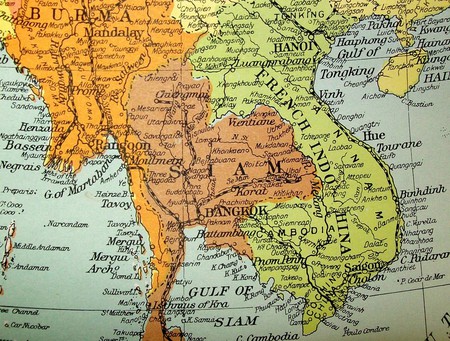 Each region has its own style and unique take on some of Thailand’s most famous cusine. For example, Thai curries are much more popular in the south of Thailand. Sticky rice is eaten more often in the north of the country, specifically in Isaan, where minced pork salad is another of the area’s fairly unique dishes. It originated from Laos, but Thailand took the dish and put its very own spin on it with multiple variations. The minced pork is mixed in with fresh mint leaves, coriander, and shallots before being doused in fish sauce and lime juice.

Thai food has long been influenced by its neighbors. Noodle dishes, such as pad Thai, were supposedly brought to the Land of Smiles by Chinese immigrants. Som Tam, a delicious, spicy salad made with shredded green papaya, originated in Laos. This might explain why this dish is so popular in Northeastern Thailand. 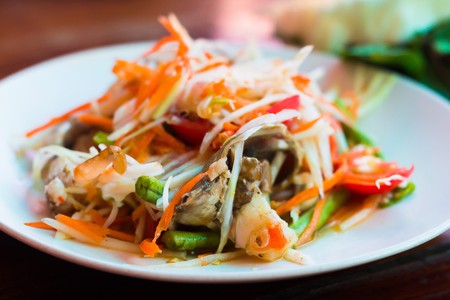 Rice is the staple of every Thai’s diet. When asking someone if they have eaten yet, the Thai phrase is often translated to, “have you eaten rice yet?” There are different types of rice in Thailand, including sticky rice, boiled white rice, Jasmine rice, fried rice, rice porridge, and rice soup. It is not uncommon for Thais to eat rice with or for almost every meal. Rice porridge is one of the most popular breakfast meals in Thailand, and it is often served with pork or seafood. 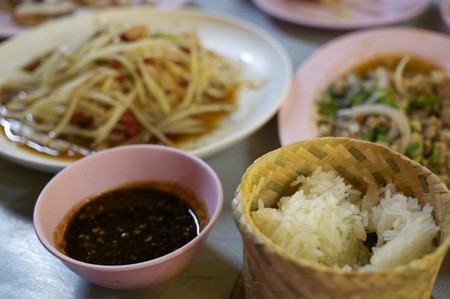 Some people simply cannot handle Thailand’s heat, and we’re not talking about the weather. Thai people love spicy food. It is one aspect of the country that all visitors of the Kingdom are warned about prior to visiting. If you can’t or don’t want to eat anything spicy, be sure to tell your server, “mai pet,” meaning, “no spicy.”