ASIA
/
THAILAND
/
BANGKOK
/
Things to Do

A Brief History of the Giant Swing in Bangkok 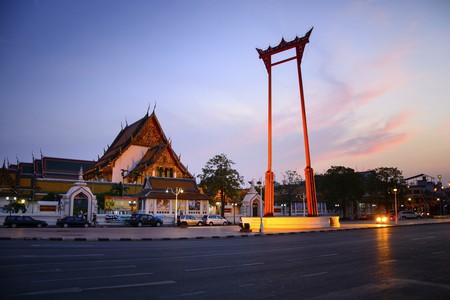 Urban décor and history collide in the city of Bangkok, home to some of the most majestic temples in Thailand. One of the most noteworthy of them all is Wat Suthat (or Wat Suthat Thepwararam), known for the towering red swing just outside its grand entrance. Here’s a brief history of the Giant Swing.

Located in the Old City area, Wat Suthat is one of the oldest and most historic temples in Thailand. Although King Rama I began construction of both the main hall (wihan) and the meeting hall (bot) in 1807, they weren’t completed until almost 40 years later. Dating back to 1784, the Giant Swing was the first on the scene and, today, can be found just outside the entrance to the temple. 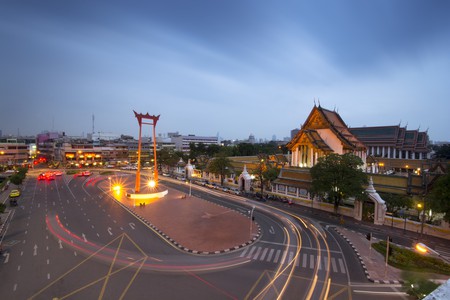 The Giant Swing outside Wat Suthat in Bangkok | © Lertnapa / Pixabay

Standing at over 69ft (21 meters) tall, the Giant Swing is a Brahman religious structure, and was originally used as part of a ceremony during the Brahman Festival. Groups of daring men used the teak poles as a slingshot of sorts, swinging themselves as high as they could in hopes of reaching a bag of gold coins that would be hung at heights of around 50 feet. Those who succeeded could keep the treasure, though many of them did not. The festival took place in December after the main rice harvest, but the rite was canceled in 1935 under the reign of King Rama VII, after several of these attempts ended in accidents and even death. 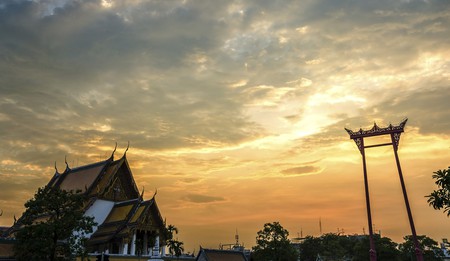 The swing outside Wat Suthat at sunset | © Guillén Pérez / Flickr

Over the years, the swing has been replaced and remodeled a handful of times. The most recent reconstruction was in 2007, and it hasn’t changed since. It’s made of teak wood, brought down from the Phrae province in northern Thailand. Today, the old version of the Giant Swing can be viewed at the Bangkok National Museum. 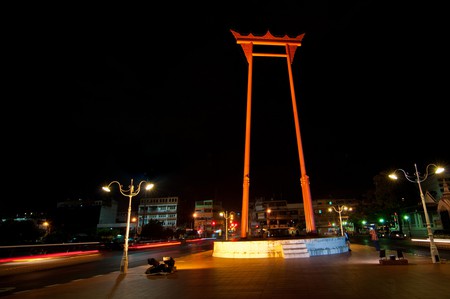 Giant Swing at Night | © Mark Fischer / Flickr
Give us feedback