Holy Temples You Can Visit in Chiang Mai, Thailand 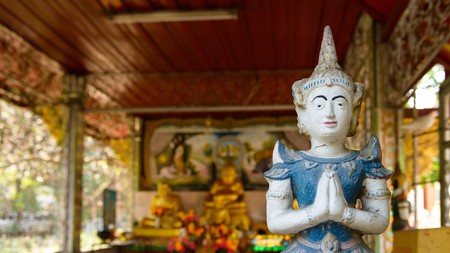 Marvel at the statues at Wat Chiang Man, one of the many must-see temples in Chiang Mai, Thailand | © Stuart Slavicky / Alamy Stock Photo

Thailand is renowned for preserving a sacred lineage of holy shrines – and Chiang Mai, in the north, reflects this in all its architectural wonders. You’ll come across religious structures known as wats while exploring the 200 temples in the city. Here is our list of the best temples to visit.

You can now visit Chiang Mai as part of TRIPS by Culture Trip’s small-group 10-day adventure across Northern Thailand. 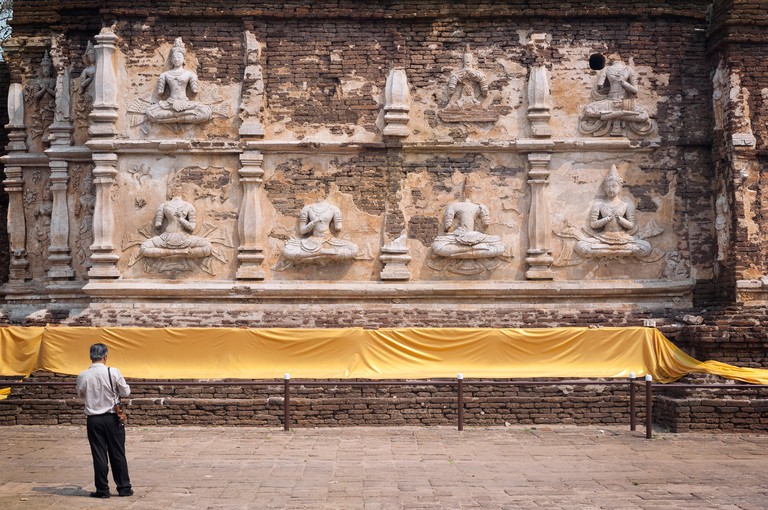 © Paul Rushton / Alamy Stock Photo
Wat Chet Yot translates as Temple of the Seven Spires. As you enter the temple’s premises, you’ll be welcomed by the famous centrepiece of the temple – the seven-spired stupa. This temple, established in 1455 by King Tilokkarat, was a primary location of the Theravada Buddhist reunion that was held back in 1477. The seven spires in the temple represent the time period (seven weeks) that Lord Buddha spent at Bodh Gaya, in India, while he was still in search of enlightenment. The temple exhibits a unique architectural style that has been inspired by Indian masonry. The walls, which are embedded with seventy celestial images, are best viewed at sunset. 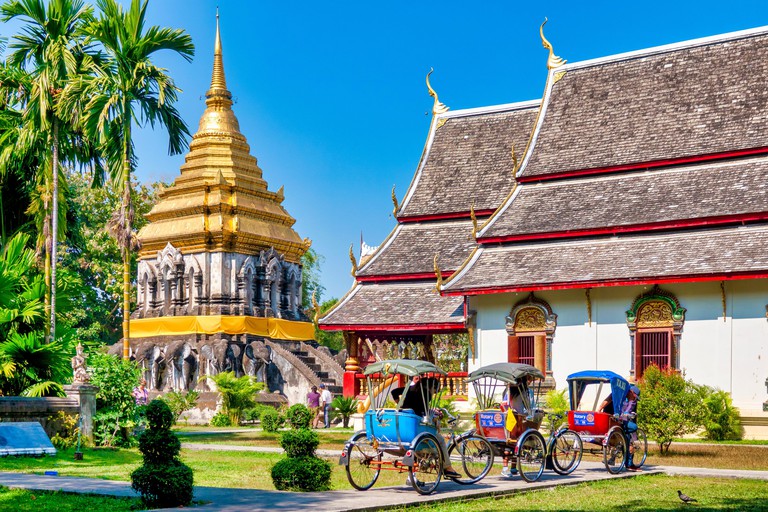 © Fabrizio Troiani / Alamy Stock Photo
With its partially restored ruins and a magnificent compound that boasts foundations from the Lanna era, Wat Chiang Man is a must-visit. Built back in 1297 CE, this was the first temple to be built in Chiang Mai under King Mantra, the driving force behind the development of the new city. Founded 700 years ago, the architecture of Wat Chiang Man is filled with history, housing a spectacular memento, the Crystal Buddha, a prestigious possession for the people of Thailand. The shrine is located in the northeast corner of the old walled city, showcasing a magnificent parade of stone elephants supporting the chedi of Wat Chiang Man. 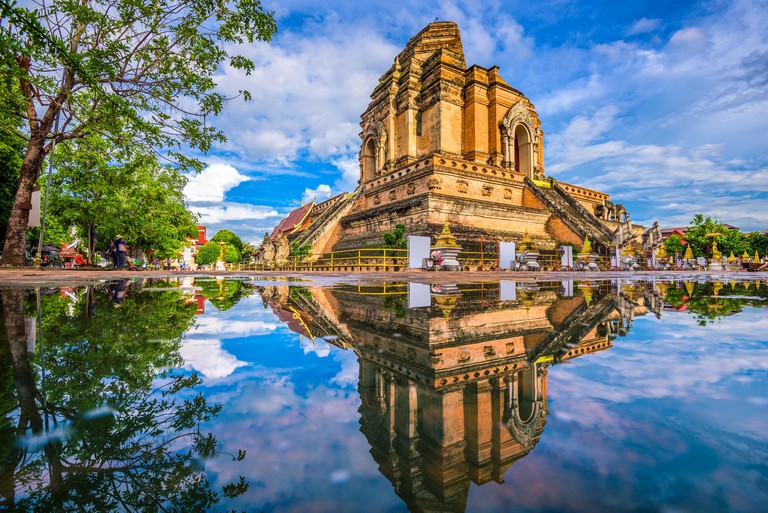 © Sean Pavone / Alamy Stock Photo
Built 600 years ago, Wat Chedi Luang is the largest structure in Chiang Mai, standing at a towering height of 280ft (85m). Initially constructed by King Saen Muang Ma, it housed the famous Emerald Buddha until 1475, which is when it was taken to Bangkok. A replica of the same was gifted to Wat Chedi Luang by the Thai King in 1995 to celebrate the 600th anniversary of the ancient brick pagoda that now lies in ruins. The temple contains a standing Buddha statue called Phra Chao Attarot that draws a large crowd of curious travellers eager to unravel the temple’s mysteries. Right next to the entrance, you’ll find the dipterocarp tree and the city pillar, both believed to be sacred protectors of the city. 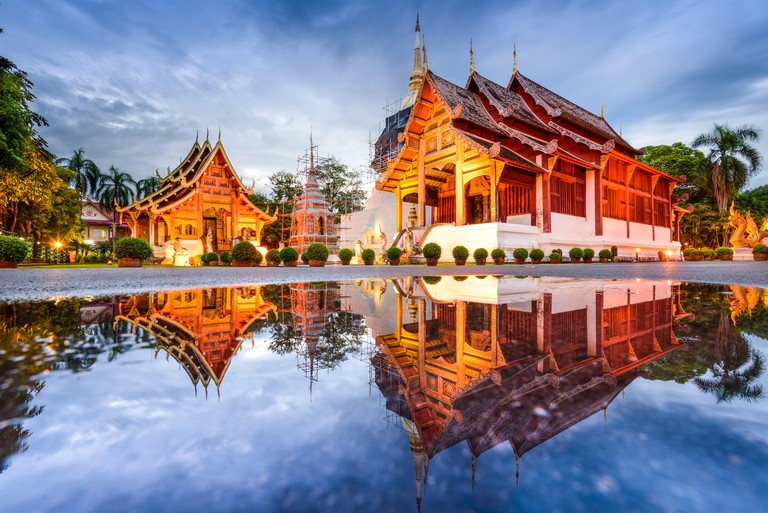 © Sean Pavone / Alamy Stock Photo
Wat Phra Singh is situated on the western end of the old city, nestled inside a moat that was originally established in the year 1345. The temple was built to house the remains of the late King Kham Fu by his son King Phayu, the 5th king of the Mangrai Dynasty. The statue of Phra Buddha Singh was brought to the temple in 1367, which led to the temple being renamed. The main attraction of Wat Phra Singh is Wihan Lai Kham, a complex which reiterates the history of Songthong and Suwanna Hongse. As for its grand architecture, visitors will be amazed by the majestic lions that guard the main entrance of the temple overlooking the Ping River. 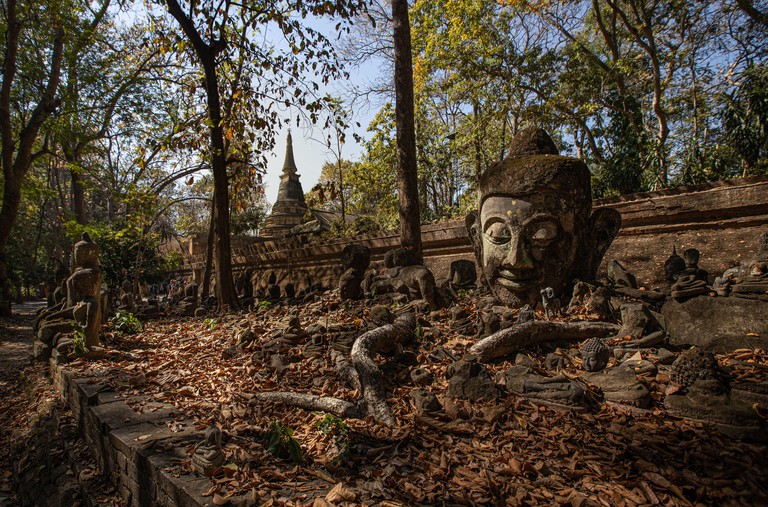 © Nat Chittamai / Alamy Stock Photo
Wat Umong was built in 1297 CE by King Manglai. The temple showcases an intricate form of architecture with a large stupa and maze-like tunnels, inlaid with 13th-century wall paintings. Stretching over an expanse of 15 acres (6ha), the natural environment of the outdoor zoo is a beautiful place to visit, where you can admire a replica of the Ashoka Pillar, a relic of the Lanna Dynasty. This temple is set apart from the rest since it is nestled inside a large hill, called Doi Suthep. The breathtaking setting, with its wild expanse, is home to many resident monks, who love basking in the afternoon sunshine while they feed the wild deer, fish and turtles. Hosting a gallery of ancient Buddhist sculptures such as the fasting Bodhisattva, Wat Umong also features a vivid collection of historic art and scriptures. 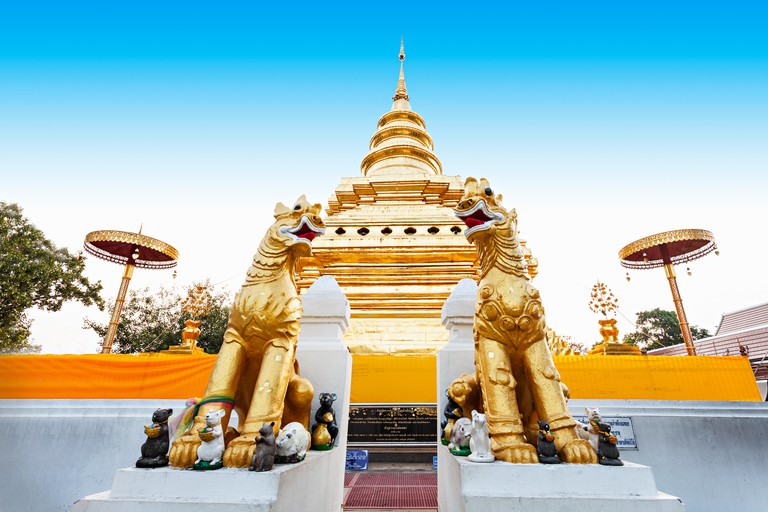 © Andrey Khrobostov / Alamy Stock Photo
A highly revered temple in Chiang Mai, the Wat Phra That Si Chom Thong Worawihan contains a Buddhist relic enshrined within a mondop-like structure. The temple maintains two viharns, the largest of which is a two-storey building that showcases a cruciform flooring and holds the mondop on its 15th-century foundation. The golden bargeboards, designed in the form of Naga snakes, align the perimeters of the Lanna-style roof. One of the most spectacular exhibits of the temple is the large, ornate Buddha Throne, or Ku, that is decorated with mythological creatures. In the backdrop of the Ku, you’ll come across gilded wood carvings, bronze Buddha images and white Singha – lion-shaped statues guarding the entrance. 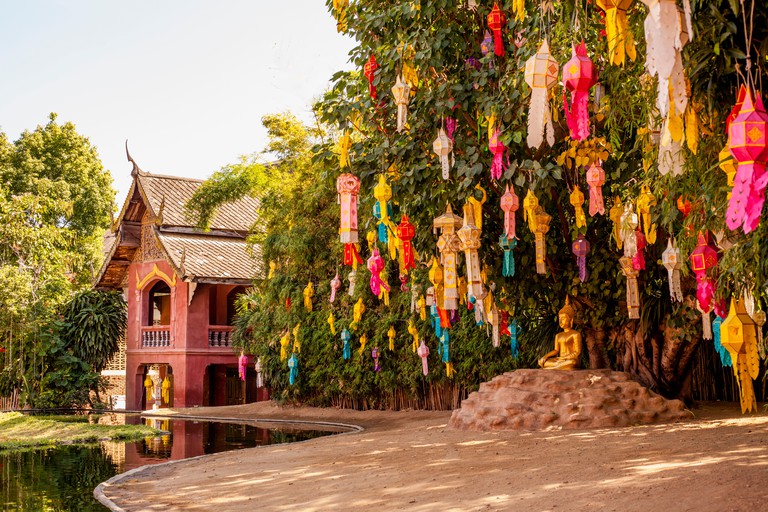 © Paul Ashby / Alamy Stock Photo
The name Wat Phan Tao means “to increase a thousand times”. In this temple, you’ll find native monks, clad in their saffron-coloured robes, who chant harmoniously throughout the evening. Built in the 14th century, the temple was one of the four monastic shrines that served as a royal residence. Nestled under the shadow of the monumental Wat Chedi Luang, this teak-wood marvel features an enormous prayer hall. The most sublime sight at the temple is the wooden viharn, a chapel that features a large gilded carving of a peacock that was believed to have been the royal symbol of the kings in Chiang Mai. 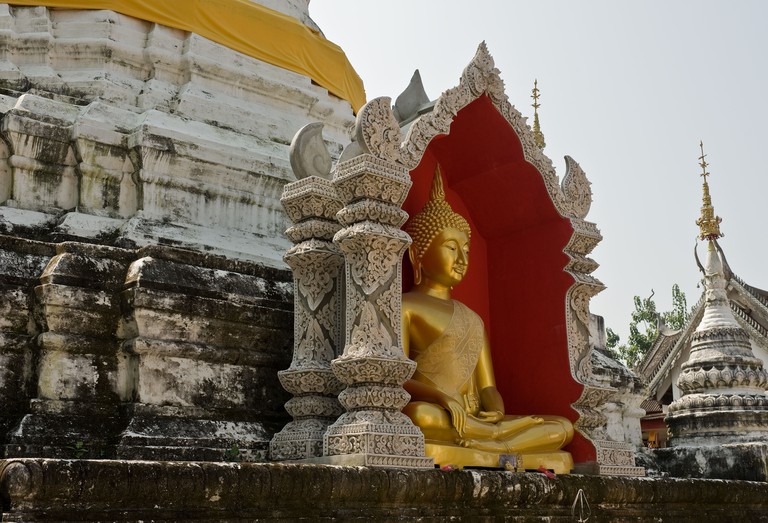 © Tref / Alamy Stock Photo
Located just outside the old walled city, Wat Buppharam is a massive structure that houses the largest teak Buddha image in Thailand. Built during the reign of King Mueang Kaeo in 1497, the temple showcases a Dhamma hall, an ubosot and two viharns. The oldest structure is the ancient chedi that was constructed more than four centuries ago. Four Burmese-styled lions, or Singhas, guard the golden spired pagoda, while the base is designed with a Buddha image. The temple, which underwent renovation in 1819, contains a magnificent collection of cultural murals depicting scenes from the Jakarta tales and ethnic Buddhist scriptures. This temple has a rich history, evident from its Burmese-inspired architecture.