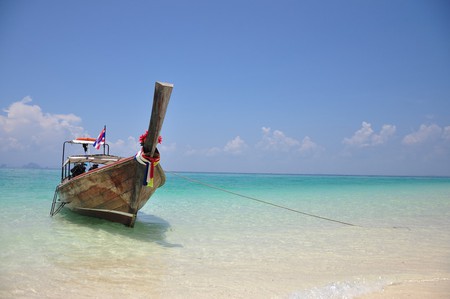 Palm tree-lined coves, pristine beaches and vibrant coral reefs are just a few of the highlights on these tropical islands off southern Thailand. From Koh Phi Phi to Koh Yao Yai, here are a handful of the best islets near Krabi.

As well as having alluring beaches and attractive towns on the mainland, Krabi Province is an excellent base from which to explore Thailand’s most picturesque islands. While many crowds flock to Koh Phi Phi, immortalised in films such as The Beach, there are also lesser-known gems to be found, including Koh Jum and Koh Pak Bia. Read on to discover Culture Trip’s rundown of the best.

Koh Yao Yai is significantly less crowded than many of Thailand’s more renowned islands. It sits halfway between Krabi and Phuket in Phang Nga Bay. Covered in a patchwork of tropical rainforest, rice paddies and rubber plantations, the unspoilt nature of Koh Yao Yai is its greatest appeal. There are a plethora of idyllic beaches to choose from, such as Laem Had and Coco Beach. Hire a moped – it’s the most efficient way to travel around the island.

Book an exclusive adventure with Culture Trip to take in Koh Yao Yai and more on a 10-day trip around southern Thailand. 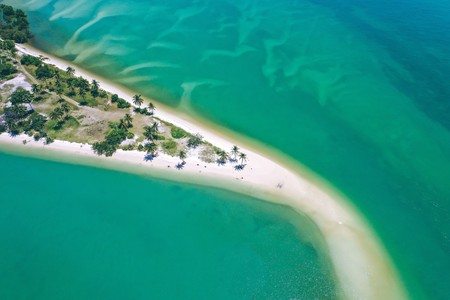 Just a few minutes away from Koh Yao Yai by boat, Koh Yao Noi is smaller in size and similarly under-explored. Like its neighbour, it’s a majority Muslim island rather than Buddhist. You won’t find a huge selection of bars here like you would on Koh Phi Phi. However, if you like hiking, swimming, kayaking, snorkelling and diving, it has a huge amount to offer. For such a compact island, there is a remarkable variety of different landscapes – from rainforest-covered mountains to peaceful beaches, dotted with coconut palms. 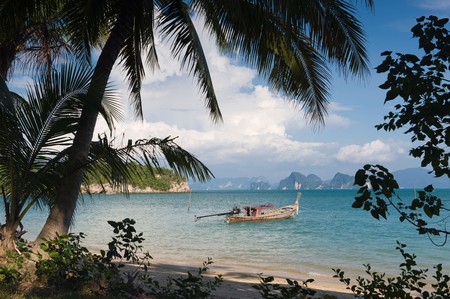 At the turn of the millennium, director Danny Boyle’s hit movie The Beach inspired a generation to pack their bags and set off in search of a tropical utopia. While it may have featured Leonardo DiCaprio, the undoubted star of the show was Koh Phi Phi and its famous Maya Bay, surrounded by white sand and sheer limestone cliffs. It’s an extremely small island with no cars or motorbikes to dodge on its paths. Whether you’re looking for a raucous beach bar or a luxury hotel, Koh Phi Phi has plenty of both. 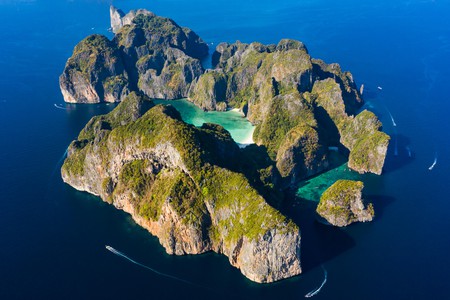 Long talked up as Thailand’s next big thing, Koh Lanta has, for the most part, resisted the plight of over-development that has affected other islands like Koh Samui. That’s not to say it hasn’t changed over the years. Sure, there are more places to stay and eat compared to 10 years ago. However, the lack of multi-storey mega-hotels and abundance of traditional bungalows on the beachfront means Koh Lanta has managed to retain much of its charm. Head to Sala Dan and the Old Town to check out the teakwood shop houses on stilts over the water. 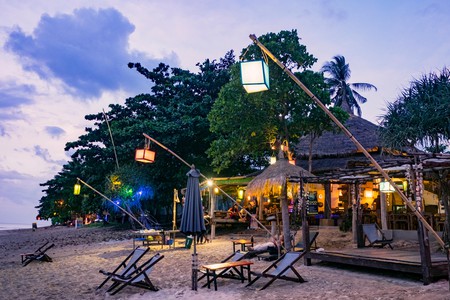 From the outside, Koh Hong looks fairly similar to many other Thai islands with its impressive limestone cliffs and soft, sandy shores. However, on closer inspection, you’ll find that it’s rather unusual. The clue is in the name. Hong translates to “room” in Thai, which refers to the large chamber in the centre of the island. Enclosed on all sides by towering cliffs, it’s home to a secluded turquoise lagoon that’s perfect for swimming or kayaking in. Follow the nature trail through the jungle to get a deeper feel for the island.

For an exclusive view of Koh Hong, book a trip with us – an epic 10-day adventure to experience the best of southern Thailand’s remote islands. 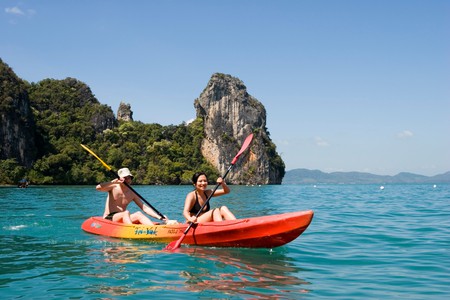 It might not have the bars of Koh Phi Phi, or the rustic shophouses of Koh Lanta, but tiny Bamboo Island is proof that size isn’t everything. Perhaps Krabi’s most postcard-worthy island, Bamboo Island boasts some of the most pristine beaches in Thailand. It’s every bit as enticing in real life as the photos make out. Bring your snorkelling mask as it is encircled by coral reefs. Sadly, there’s nowhere to stay on the island – but it’s well worth a day trip. 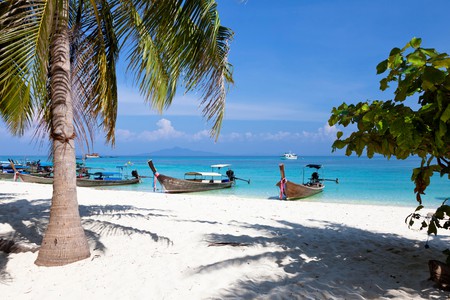 If it’s fair to describe Koh Lanta as relatively under-visited, then, by comparison, Koh Jum is practically undiscovered. With little more than wooden beachfront bungalows to stay in on the island, Koh Jum is a genuine throwback as far as Thai islands are concerned. Stroll along the practically deserted beaches – it’s a great place to escape the crowds. Throw in a handful of small restaurants serving authentic local dishes, as well as a few beachfront shacks well-stocked with ice-cold beers and you just might not want to go home. 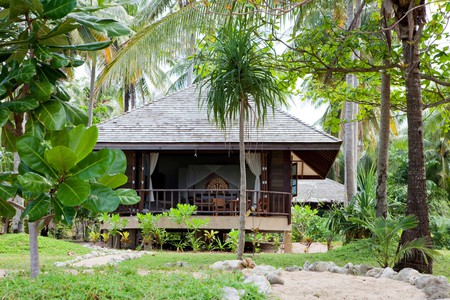 The first thing you’ll notice about Koh Pak Bia is its peculiar shape. It comprises a large, dome-shaped forest connected to a much smaller rocky outcrop by a sandy peninsula. The shallow water and abundant marine life flourishing around the coral reef make it a perfect spot for swimming and snorkelling, plus it’s wonderfully uncrowded. The best way to reach Koh Pak Bia is via a private long-tail boat – it takes about 45 from Ao Nang or 20 minutes by speedboat. 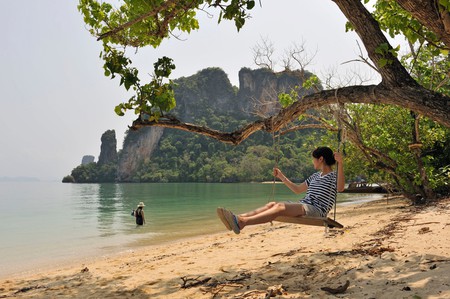 Koh Kai, otherwise known as Chicken Island, is named after the slightly surreal chicken-shaped limestone rock formation on its southern tip. It’s part of a cluster of three islands (along with Koh Tap and Koh Mor) linked to each other by a sandbar. At low tide, you can walk between all of them. While there’s virtually no infrastructure here aside from a small snack shack, Koh Kai and its nearby islands are another outstanding snorkelling spot due to the incredibly clear water. 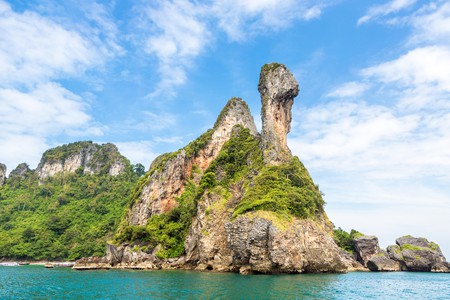 Just offshore from Ao Nang, Koh Poda (a close neighbour of Koh Kai) is one of the easiest islands to reach from the mainland. It has two beaches to choose from – a larger one in the north and a smaller one in the east – and a coral reef teeming with colourful fish. Whether you want to soak up the rays or try sea kayaking, this tiny tropical haven is well worth folding into your itinerary. Arrive earlier in the morning before the crowds roll in later on. 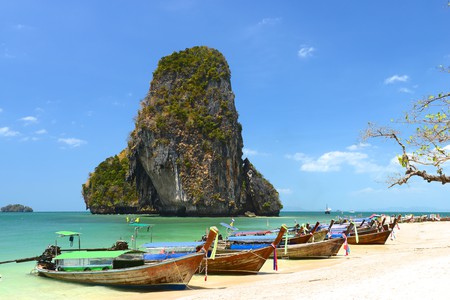 This is an updated version of an article originally written by Kyle Hulme.