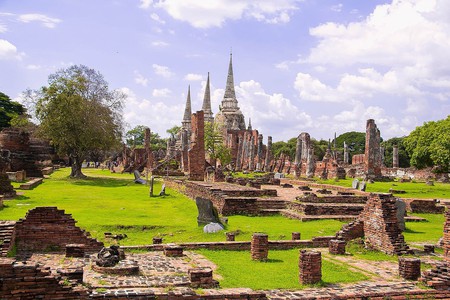 Thailand is obsessed with lakorns, or Thai soap operas. The typical lakorn is characterized by romance, plenty of drama, a dose of comedy, and traces of mysticism, and the latest overnight hit Love Destiny combines each of these facets while plunging viewers into the history of a much celebrated time period.

The drama centres around the journey of a 21st century archaeologist who awakes from a car crash in the body of Karaket, an Ayutthaya-era noble (with a bit of a nasty reputation) enjoying high-society privileges within period’s Sakdina system.

Set in the time of King Narai, who ruled more than three centuries ago, the drama has fueled a revitalized interest in Thailand’s rich history during the arrival of tenuous Western influence, and Thais are flocking by the tens of thousands to visit the following iconic sites featured in the series.

This royal temple is a focal point for many scenes throughout the hit series. Originally constructed in 1630, historians believe the temple was likely used as a fortress during the kingdom’s final war with Burma in 1767, when the invading army largely destroyed the structure, leaving the area with its intricate and prized ruins that are today well-restored and protected for posterity. At the time of the series, the temple was likely in regular use for religious ceremonies. 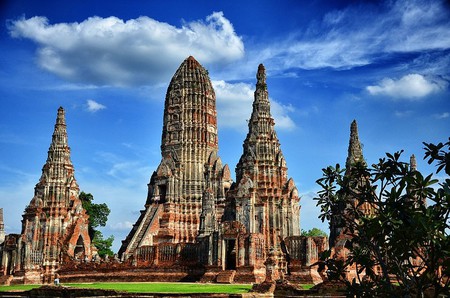 In the show, our heroine Karaket lounges among the temple grounds enjoying foi thong, a dessert of thread-spun egg yolks, historically indicative of French and Portuguese influence to the region at the time. It’s believed that Maria Guoymar de Pinha, wife to King Narai’s counselor Constantine Phaulkon whom Ketsurang befriends in the series, was the one to introduce egg yolk-based desserts to early Thai cooking.

The series’ attention to details like everyday cuisine, is celebrated for its historical accuracy in representing the international spirit of ancient Ayutthaya, intentionally established by the King’s open door policy to promote trade.

As she does often throughout the series, Karaket also marvels at her ancient Siamese counterparts through the introduction of features of 21st century life. In one episode, she serves up grilled river prawns in a spicy seafood sauce, and introduces a version of mamuang nam pla wan, a cousin to sweet mango sticky rice.

One of 16 fortresses built along the 12 kilometres of Ayutthaya’s city walls, Phet Fortress, or Pom Phet, played the important role of protecting the city’s harbour. All foreign ships traveling along the Chao Phraya River were required to stop for inspection and unloading at this point, and none were allowed further but for the Chinese and Persian settlers granted entry by order of the King. Its original design demonstrates both Portuguese and French influence in its architecture, and it was a key component for managing international commerce until the reign of King Rama I, who had the fortress dismantled so the bricks could be used in construction of the new capital in Bangkok. 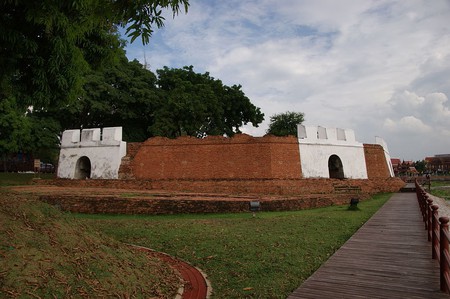 During the era into which our protagonist was flung, Phet Fortress would have been a hub of activity and a scene of organized chaos, its towering visage providing the first impression of the protected kingdom to foreign visitors.

The lowland, tropical geography of ancient Ayutthaya helped establish the region as a hub for canal-based economies, today referred to as floating markets. According to records dating before the kingdom’s fall in 1767, these waterways served to levy Ayutthaya as one of the major maritime ports of Asia, facilitating trade between the Indian Ocean to the West and the South China Sea to the East. 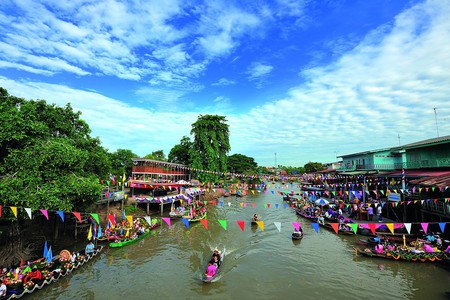 These accounts detail how the canals were much more than commerce highways to the ancient society, however. Along the banks thrived settlements representative of “forty nations,” rafts used as both homes and shops numbering more than 20,000, and the underpinnings of a burgeoning cosmopolitan society with access to unique and exotic luxuries from all over the world. Karaket embodied this early cosmopolitan lifestyle, shopping for jewelry at the famous Talat Chikun market.

This early Chinese settlement was one of the busiest marketplaces in Ayutthaya, and experts have uncovered remnants of the emergent Lanna, or Northern Thai culture that would rival Ayutthaya to the North. This developing presence would grow to combine its forces with the neighboring Siamese rulers to overtake the Burmese invaders nearly 100 years after the fall of Ayutthaya. 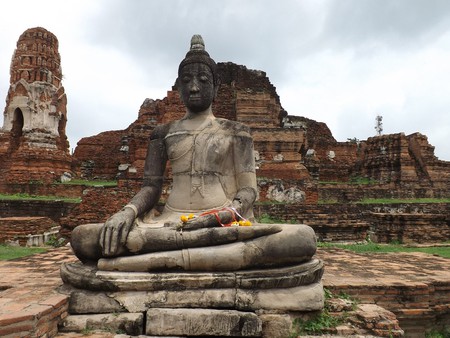 Evidence of Chinese settlements have recently been unearthed in Ayutthaya. Chinese and Persians were among the only foreigners permitted to permanently settle under King Narai's reign | © Armaimon / Pixabay

Karaket’s interactions in the series with the early Chinese mafia at Banjeen, along Klong Khun Lakhon Chai, represents how these Sino communities were woven seamlessly into the social construct of ancient Ayutthaya.

The high levels of craftsmanship suggest to scholars that Ayutthaya residents were confident in their leaders’ engagement with foreign visitors, and would not have expected the Burmese sacking of their city.

This two-storey building served as a residence for envoys visiting King Narai the Great in Lop Buri during the Ayutthaya period. One of these special envoys was Constantine Phaulkon, whose title as royal minister, or Chaophraya Wichayen, earned this residence its modern-day name. A Greek man serving in the court of King Narai, Phaulkon’s true allegiance to the Siamese king or foreign envoys has long been contested among historians.

During the series, Phaulkon and his wife Maria Guoymar de Pinha–a close friend to our fictional Karaket–play important roles in developing the environment of international cooperation and industry present in Siam during a tumultuous time in history, when many of its neighbouring sovereignties were falling to the pressures of European colonialism.