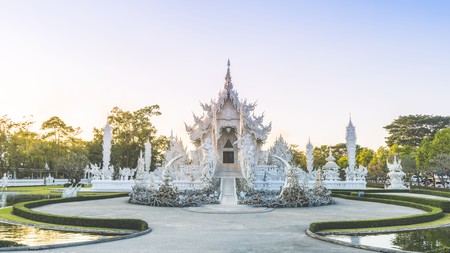 Millions of tourists visit Thailand year after year, and the country surely has an attraction for everyone. From sleepy northern cities to a thriving capital and pristine islands galore, the country is eager to please all visitors. See what the hype is about with these must-visit attractions in Thailand.

You can experience the best of Thailand through the eyes of a Local Insider by joining Culture Trip’s exclusive 10-day Northern Thailand adventure, or our specially curated 10-day Southern Thailand tour. 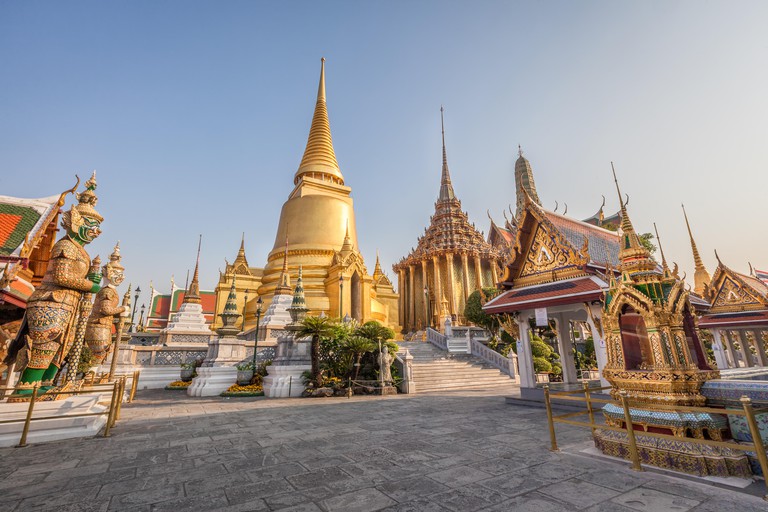 Located adjacent the Chao Phraya River in Bangkok is both the Grand Palace and Wat Phra Kaew. It was built next to the river strategically in order to help defend the palace from possible invasions. Construction of the palace began in 1782 during the reign of King Rama I, and was not finished until the late 1800s. No member of the royal family has lived here since 1925 – today it mainly acts as one of the biggest tourist hot spots in the city. This is also where visitors will find the stunning temple of Wat Phra Kaew, otherwise known as the Temple of the Emerald Buddha. The Grand Palace is one of the most frequented attractions in the world, and it is estimated that some eight million tourists visit each year. 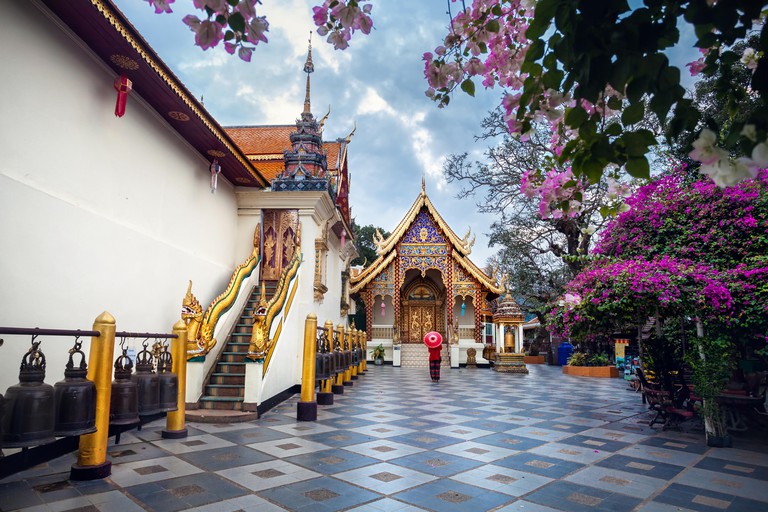 © Marina Pissarova / Alamy Stock Photo
Located just outside the main gates of Chiang Mai is the temple of Doi Suthep, or Wat Phra That Doi Suthep. Doi Suthep is actually the name of the mountain where the temple is found. The temple provides visitors with some of the most impressive views of the city. When not taking in the spectacular view, visitors can meander through shrines, pagodas, and more. Be sure to strap on some athletic shoes as the staircase to the temple is equipped with over 300 steps. 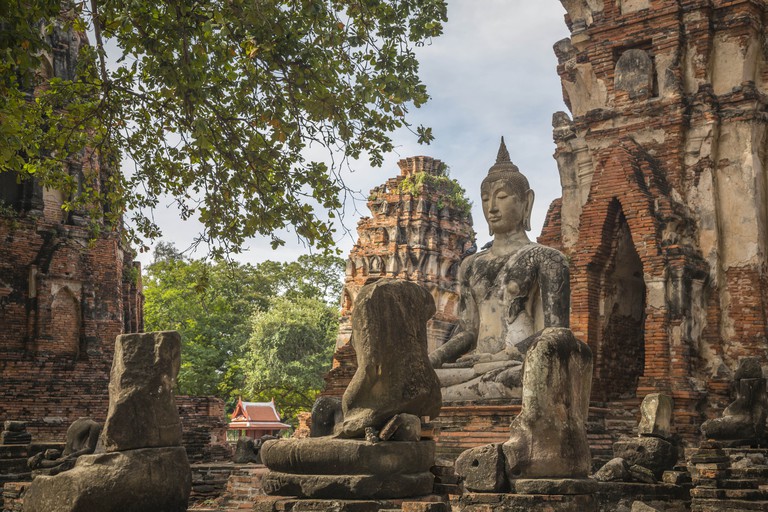 © Gargolas / Getty Images
Many of the ruins found at Ayutthaya Historical Park took some 150 years to complete. The city, which was the second capital of Siam after Sukhothai, flourished for around 400 years before it was eventually destroyed by the Burmese. Many of the structures found in the city were made of wood, which did not endure the fires that eventually destroyed the city. Only the stone structures remain, but regardless of wear and tear, these are themselves some of the most spectacular remains in all of Southeast Asia. The temples’ construction reflects both Siamese and Khmer architecture, and the ruins were so noteworthy they were designated a Unesco World Heritage Site in 1991. 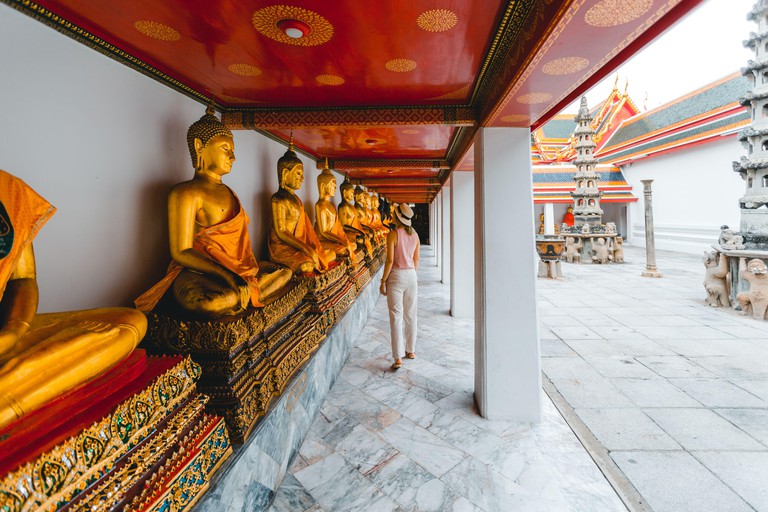 © Phongsak Norkaewmongkhon / Alamy
Book Now
Wat Pho is a force to be reckoned with. This Buddhist temple is one of the oldest and the largest in the capital – which it needs to be, to house the 46-meter long and 15-meter high giant reclining Buddha that sits at its core. Many visitors do not make it past this stunning religious relic as they are planted in awe. However, the complex is home to glittering stupas, a traditional Thai massage school, and more worth checking out.

Backpackers and partiers flock to the Full Moon Party in Thailand each month to see for themselves what all the hype is about. The festivity goes down on the island of Koh Phangan on Haad Rin Beach. The infamous party is known for the large crowds of neon painted and bikini-ridden tourists who frequent them, with vibrant buckets of booze in tow to get the party started. Fire shows and live DJs are guaranteed to make an appearance, with parties raging until early morning. 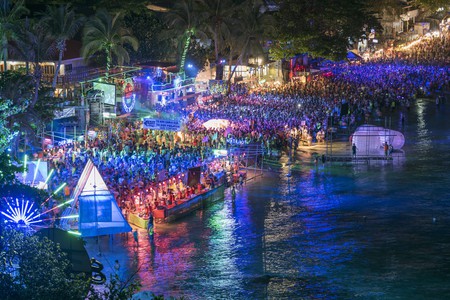 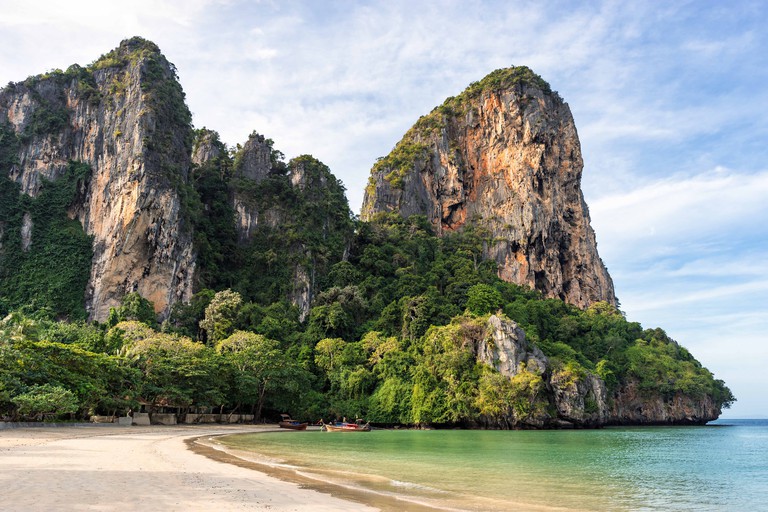 © Drablenkov / Getty Images
Many tourists climb aboard a colorful longtail boat to make the journey from Krabi to Railay Bay. There are four main beaches on the peninsula, but the most noteworthy is Phra Nang Beach. This particular strip of sand has something for everyone, equipped with rock climbing and even a phallus shrine. In addition, there are some stunning viewpoints worth trekking too, plus a strikingly blue lagoon to explore. 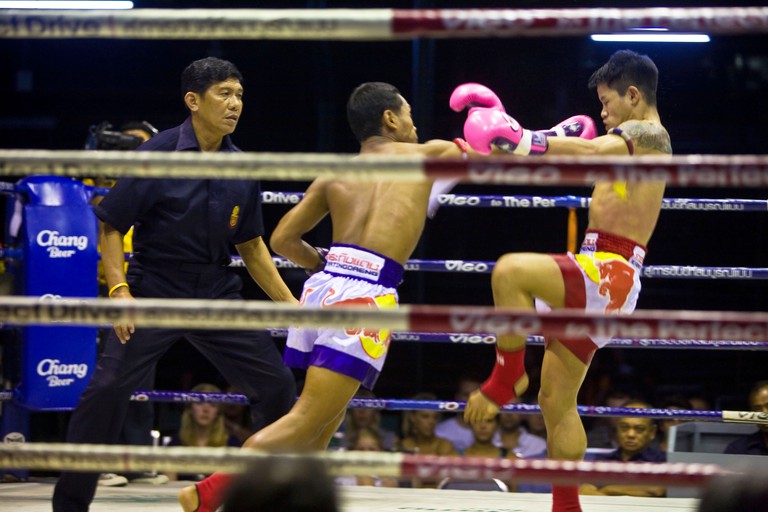 © Eugene Nikiforov / Alamy Stock Photo
As the national sport of Thailand, visitors simply have to witness at least one Muay Thai fight before departing the Kingdom. Arguably the best place to do this is at New Lumpinee Boxing Stadium in Bangkok. The stadium is an updated version of the Lumpini Boxing Stadium, which was originally built in 1956. Fights are held three times a week, so hopefully visitors to the capital can squeeze in a match or two.

Floating Markets Near the Capital

Before the capital was furnished with roadways, the many weaving waterways acted as the main form of transportation. Many of these waterways have since been filled in to make way for the capital’s urban decor, but venture outside the city center and visitors will find many of these floating markets still exist. Floating markets provide visitors to Thailand with a unique shopping experience. Colorful boats are filled with even more vibrant goods, equipped with everything from souvenirs to tasty traditional Thai food. 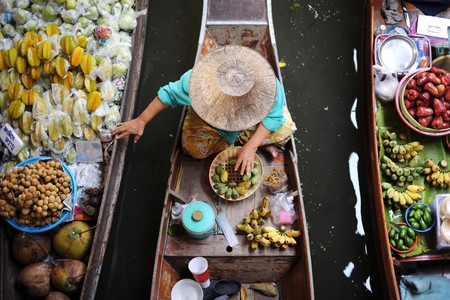 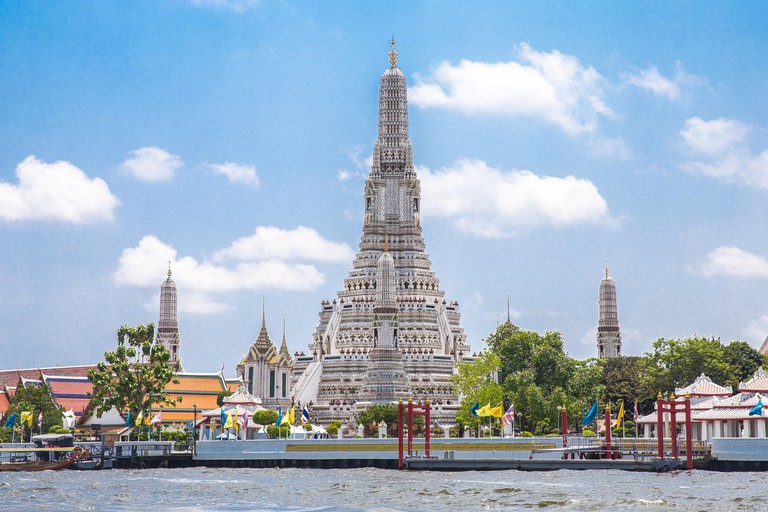 © Greg Childs / Alamy
Wat Arun is like no other religious structure in the Kingdom. The Buddhist temple sits right along the main artery of the capital: the Chao Phraya River. Its positioning on the banks may have been for strategic reasons when it was originally built in the early 19th century, however, now it simply adds to the temple aesthetically. The best time to visit the religious relic is either at sunset or sunrise, which is ironic enough as the temple is also known as the Temple of the Dawn. 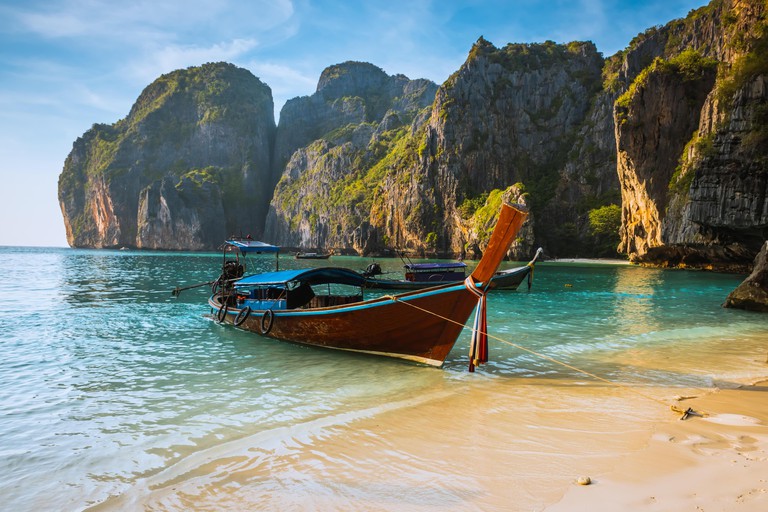 © Tetyana Kochneva / Alamy Stock Photo
The jury is out as to which is more beautiful: Leonardo DiCaprio or Maya Bay, the secluded beach in Thailand the actor made famous. In the book-to-movie drama The Beach, DiCaprio escapes to Thailand hoping to find adventure. He certainly has an adventure, one bigger than he bargained for, on the island of Koh Phi Phi where this bay is found. When the movie was released in 2000, tourists’ curiosities were peaked: what is this bay that looks almost too pristine to be real? Since then, visitors flock to this stretch of white sand via boat to explore as DiCaprio did. 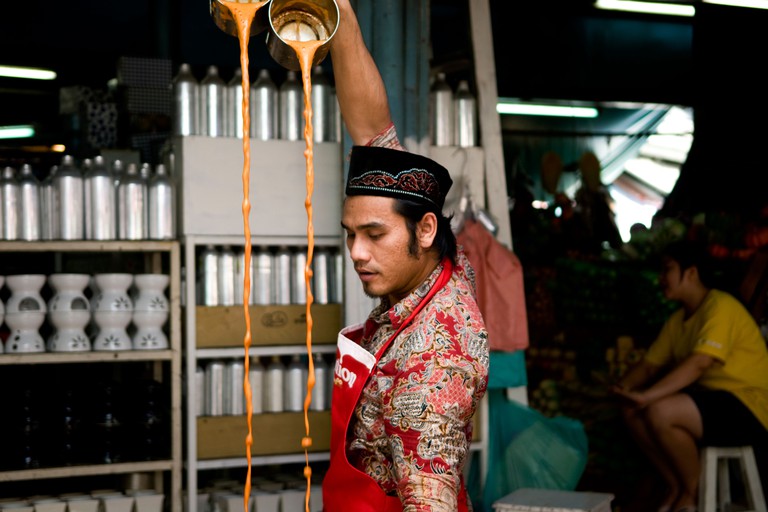 © Boaz Rottem / Alamy Stock Photo
Book Now
Even the most avid of shopaholics may find themselves overwhelmed at the seemingly never-ending Chatuchak Weekend Market. This market in Bangkok is one of the biggest in Asia, with aisle upon aisle of vendors selling everything and anything visitors could possibly desire. Keep your bags close and your baht at the ready, as no visitor could possibly leave this market without buying at least a souvenir or two. 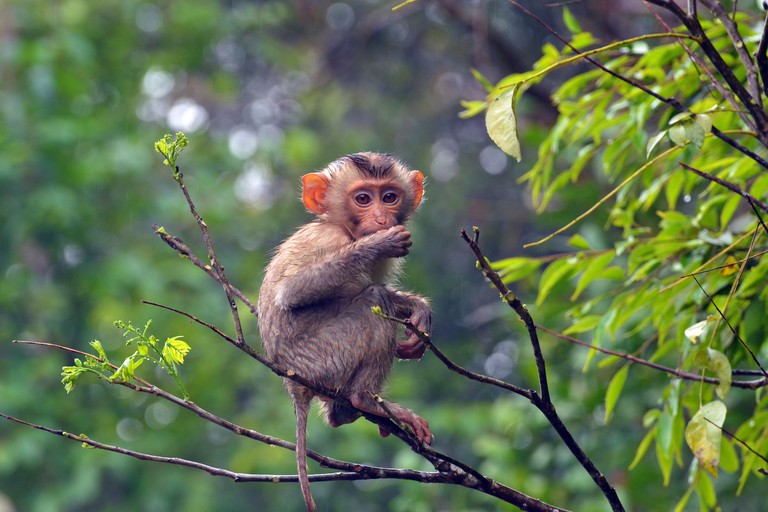 © Ian Watt / Alamy Stock Photo
Khao Yai National Park is one of the most frequented parks in Thailand because of its relatively close proximity to the capital. Regardless of convenience, however, this national park would surely continue to lure in visitors with its promise of wildlife, an abundance of hiking trails, and overall beauty. It was the first official national park to be established in Thailand, and was even declared a World Heritage Site by Unesco.

Though the city of Kanchanaburi is known for its many museums and historic relics found throughout, one of the most noteworthy finds in this western town are the Erawan Falls. Found in Erawan National Park, which spans over 1.5km, the seven-tiered fall is one of the main reasons why visitors frequent this park. Both tourists and locals take to the cool, emerald pools found at each level, finding refuge from Thailand’s heat. 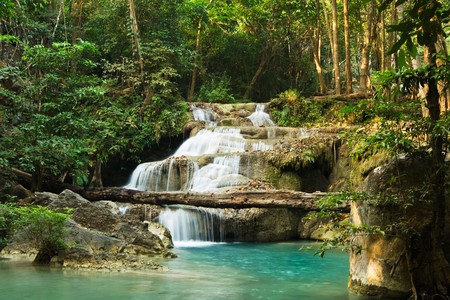 The Chao Phraya River, otherwise known as the River of Kings, is one of the most important waterways in Thailand. Some of the top attractions in the capital are found along its banks, and it is one of the major transportation hubs in the city. Whether visitors take to the river to enjoy a dinner cruise or hop on the Chao Phraya River Express Boat to explore Bangkok, there are many ways to explore this particular waterway. 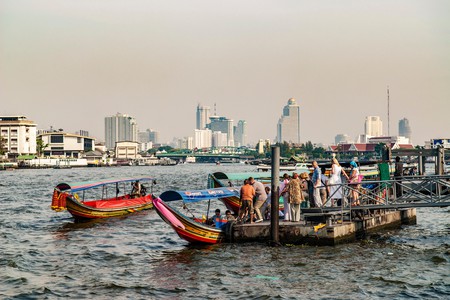 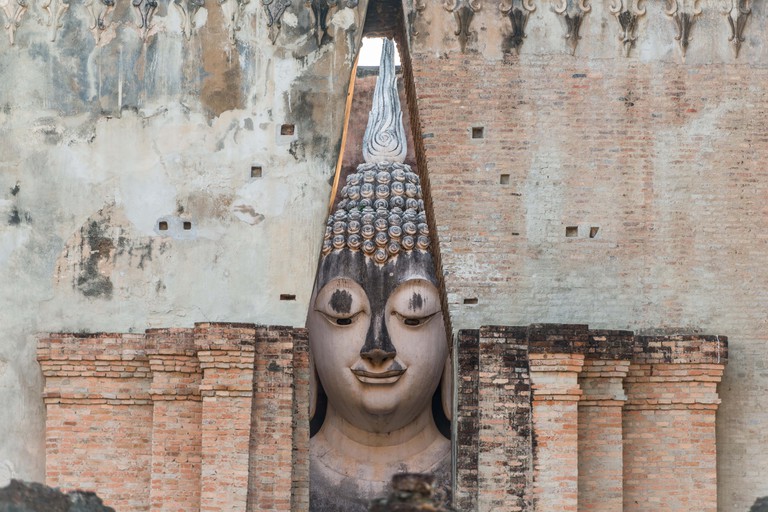 © Goldquest / Alamy Stock Photo
The ancient city of Sukhothai was the country’s first Siamese Kingdom. It flourished in the 13th and into the 14th century, and it is known as the golden age. Visitors frequent the city to explore Sukhothai Historical Park, home to a number of ancient ruins, including the temple of Wat Mahathat. 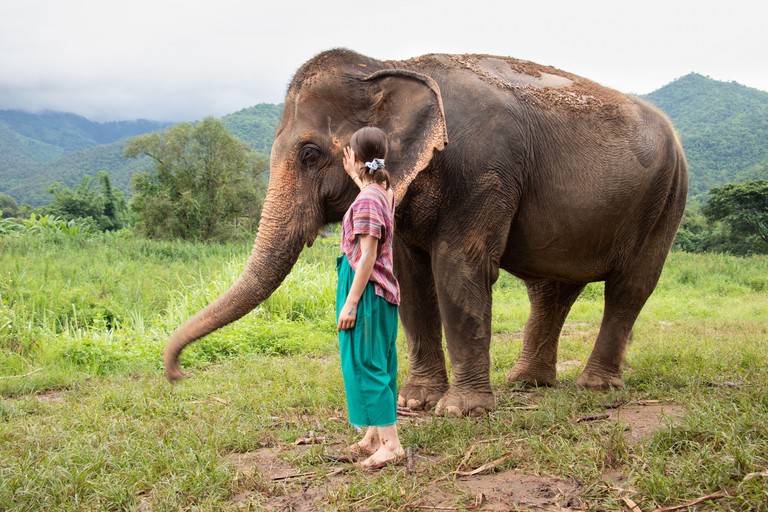 © Martin Gruber / Alamy
Book Now
The bucket list of every traveler to Thailand usually includes some sort of animal sanctuary. Elephant sanctuaries are found across the country, but visitors should be wary of which ones they choose to visit. Elephant Nature Park in Chiang Mai is a picturesque animal sanctuary nestled in an emerald green valley surrounded by mountainous terrain. The sanctuary has rescued dozen of elephants since it opened in the 1990s. Another sanctuary visitors should check out is Boon Lott’s Elephant Sanctuary, or BLES. Located in Sukhothai, visitors get to spend time with the rehabilitated elephants in a responsible and safe way. 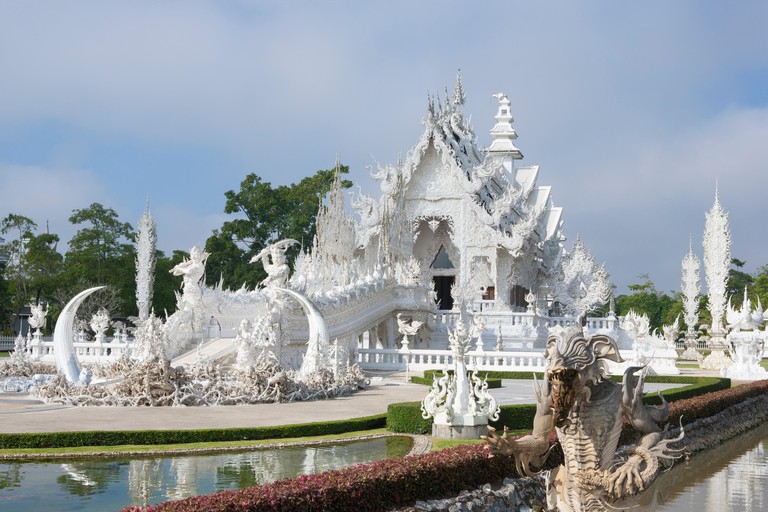 © Simon Meaker / Alamy Stock Photo
The White Temple, or Wat Rong Khun, is a unique Buddhist religious structure found in the northern city of Chiang Rai. The privately owned temple was built by artist Chalermchai Kositpipat and completed in 1997. The temple is renowned for being almost entirely white, with the grounds housing a meditation hall, art gallery, ubosot, religious relics, and more.

No backpacking trip is complete without a night out on the infamous Khao San Road. It is about 410 meters in length and takes only about five minutes – depending on the crowd – to walk it in its entirety. The street is lined with bars, clubs, cheap street eats and loads of affordable accommodation, which is why budget-friendly backpackers tend to flock to this particular stretch of road. Whether visitors are hankering for a scorpion or want to experience a unique night out, this is the place to visit. 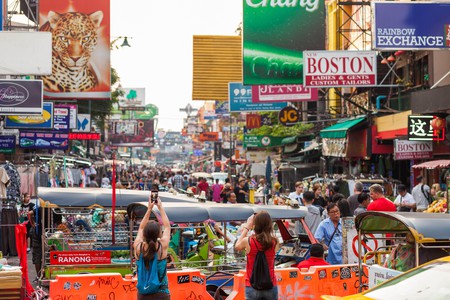 Whether visitors make their way to Soi Cowboy, Nana Plaza or Patpong, they must feast their eyes upon at least one red light district before departing the Land of Smiles. These streets are some of the most vibrant, seedy, yet interesting stretches of roads and areas in all of Thailand. Be warned, however, that prostitution has been illegal in Thailand since 1960. 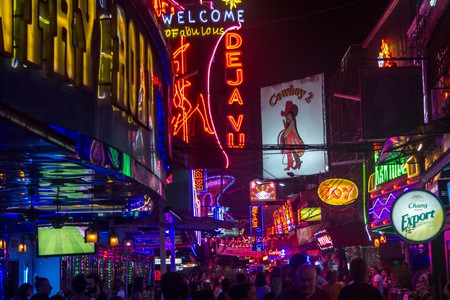 Though there are many markets and night bazaars located in the city of Chiang Mai, none are as noteworthy as the Sunday Walking Street Market. It is centrally located, and the one-kilometer road where it is found is closed to traffic, so visitors can meander and browse the plethora of goods in peace. The market is filled with handmade handicrafts this region is well-known for. Be sure to barter with vendors to get the best prices. 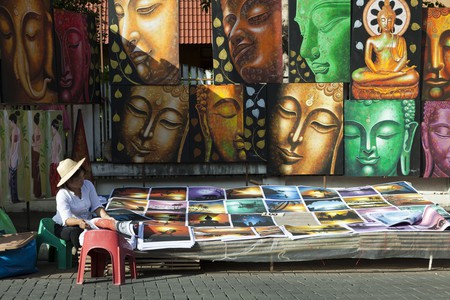