The 13 Most Terrifying Ghosts in Thailand 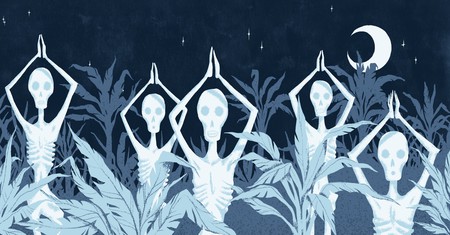 Thailand is known around the world as the Land of Smiles, but just as prevalent as the cheery grins is the widely-held belief in ghosts. Before taking your trip, here’s your chance to get to know the spooky side a little better.

Once a beautiful woman who was burned to death, Krasue is cursed to be forever hungry and so sets off each night in search of blood and flesh. Living as a normal person by day, by nightfall the head detaches from the body into quite the frightful sight. A floating head with viscera dangling below, Krasue will dine on animals or faeces if she can’t find a pregnant lady or newborn baby, and will wipe her bloody mouth on clothes hanging outside — which is why Thais ensure not to leave things out overnight.

Nak was beautiful, pregnant and truly in love. All was well, until her husband was conscripted to fight in the war. Whilst he was away, Mae and the baby both passed away in childbirth. The husband returns to find his wife and baby, and is warned by the villagers that she’s now a ghost. The husband realises once he sees Nak stretch her arm out to pick something up, and he flees. With Nak in hot pursuit, he hides amongst a ghost-proof plant before heading to the sanctuary of a temple. Nak was exorcised twice by monks, confined firstly to a jar and secondly to a waistband, and it’s said that the royal family of Thailand has that waistband today.

Said to be as tall as a palm tree, Pret are ghosts that are prominent in Buddhist folklore. Ungrateful and materialistic people are reincarnated as Pret, a tall being with a ravenous appetite that can’t be satisfied by its tiny, pinhole mouth — which it earned from talking back to its parents. Pret spend their days begging for forgiveness, and are celebrated with their own festival in southern Thailand.

Thought to occupy the same spaces as Krasue, Krahang is a male ghost who too spends his days in the guise of an ordinary villager but transforms at night. Shirtless and covered below the waist by a loincloth, Krahang takes to the skies with the aid of rice baskets acting as wings, and has been blamed for attacks on women in local villages.

Thought to roam around the northeastern region of Isan, Phi Pop is a fearful ghost who possesses the bodies of her victims and hunts for raw meat, before eventually eating their intestines from the inside. Those who are thought to be possessed by Phi Pop need to undergo an exorcism, in the form of a dance, which drives the ghost away. To this day, Phi Pop is blamed for deaths in both Thailand and Laos.

A beautiful woman in a green traditional Thai dress and with a deep red lipstick, Nang Tani occupies banana trees and entices men during full moons into having sex with her. Should they then betray her and love another, they’ll meet an untimely death at her hands. Other than this, she’s said to be benevolent, and is even said to feed passing monks!

Anybody who has ever suffered from sleep paralysis may want to stop reading now. Phi Am is a ghost who is said to sit on the chests of people whilst they sleep, causing discomfort and even death. A way to combat them? Put on lipstick. Phi Am doesn’t attack women, and those who believe in her existence put on lipstick before sleeping to trick Phi Am into thinking they’re female. She’ll probably see right through it if you have a beard, though.

One of the most feared and most dangerous ghost types in Thailand is that of the Phi Tai Hong. Said to be ghosts of people who suffered violent or sudden deaths, Phi Tai Hong are angry and dangerous in their afterlife. The most feared of all are those who died whilst pregnant, as the presence of two spirits is particularly powerful. Blamed for haunted houses and particularly difficult to exorcise, they’re not somebody you’d want to meet on a backstreet off Khao San Road.

Ah, those southern Thai beaches, right? Perfect for lighting a fire, welcoming strangers and exchanging travel stories. Or are they? Phi Lang Kluang are ghosts in the south of Thailand who’ll join your group and will seem to be normal — until they ask someone to scratch their back. Upon doing so, their terrifying secret will be revealed; a gaping wound right through the body, festering with maggots, worms and millipedes. Be careful who you share your bucket with.

Kee, which translates to poop, is a ghost that occupies your toilet, and must be consulted before your toilet is used and after a bad dream, as doing so will see bad luck being removed from you via your excrement. Perhaps not the scariest of ghosts, it’s worth having a chat with it if you’re set on eating nothing but questionably-clean street food whilst you’re here, as there’s not much scarier than having food poisoning and access to only a squat toilet.

There aren’t many things scarier than ghost children, and this Thai variation is particularly creepy. Stillborn fetuses are roasted and chanted to be a necromancer, before being covered in gold foil and placed by a shrine. The ghost is then said to adhere to their master’s bidding, providing it is kept happy by placing food and toys near to the foetus. Failure to keep it entertained or happy will see their masters subjected to poltergeist-esque behaviour such as the slamming of door and the all-too-creepy sound of ghost children laughing. Despite kuman thong today being widely replaced with dolls, as recently as 2012 a British businessman of Taiwanese origin was found with six fetuses covered in gold in Bangkok, proving perhaps the practice isn’t as dead as many think.

A foul-smelling ghost who appears as a normal person in the daytime, Phi Phong feeds on unpleasant foods such as frogs, forcing many to stay indoors if they hear the noises of frogs nearby for fear of bumping into him. Whilst not especially dangerous to humans, Phi Phong will attack if threatened and there’s the risk of becoming one yourself should you accidentally ingest his saliva.

A one-legged ghost with a protruding proboscis that repeats “Kong Koi” whilst hopping around, Kong Koi dwells in forests and sucks blood from the toes of campers who are sleeping. It’s advised to either cross your legs or sleep with something on your feet if you’re planning to camp out under the stars.