What Not to Eat and Drink in Thailand 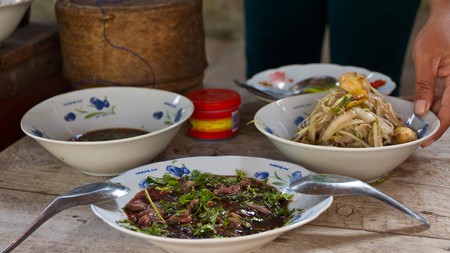 Thai food is delicious, but there are some dishes you’ll want to avoid, including those with raw meat and blood | © Max Dominik Daiber / Alamy Stock Photo

Thai cuisine is celebrated around the world, with its mixture of spicy, salty, sour and sweet delighting taste buds and satisfying appetites. In Thailand, street food is abundant, and there are also many regional dishes and nationwide favourites to try. But there are some dishes you should avoid, whether for the sake of your health or to protect endangered wildlife. 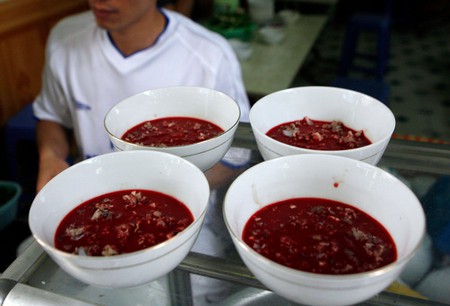 The base of luu moo is pig’s blood, which can cause a bacterial infection | © REUTERS / Alamy Stock Photo

The base of this soup-like dish is raw pig’s blood, which is mixed with spices and sometimes various pieces of offal. The thick concoction is eaten with noodles. However, the chance of developing a bacterial infection after eating the blood is high and could even be fatal. For a safer pork dish, especially if you’re in Phuket, you can try moo hong, a pork-belly stew that is simmered for two to three hours.

Koi pla is a popular dish in northeast Thailand. The salad is made with minced raw fish and flavoured with lime, chilli and spices. While one plate probably won’t hurt you, the dish is thought to have carcinogenic properties, as the fish can contain parasites that cause cancer of the bile duct. While cooking the fish would kill the parasites, eating the raw dish enables the bugs to enter the body. 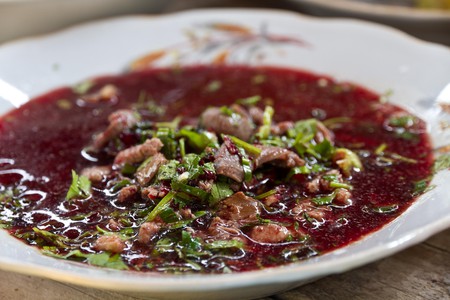 Larb leuat neua is a delicacy from Isan made with raw beef and a liberal helping of uncooked blood. The minced meat is mixed with mint and spring onion and usually served with sticky rice. It’s a popular bar snack, said to go especially well with a glass of ice-cold beer. However, there’s a high risk of food poisoning from any uncooked meat, and upset stomachs are common for those not used to eating such dishes. Raw beef can also contain parasites.

Larb dib is yet another raw meat salad from Thailand’s northeast. It can be made with raw beef or pork and is usually flavoured with mint and other seasonings. As with larb leuat neua, it can contain parasites or bacteria. There’s a theme developing here: raw meat can be risky. 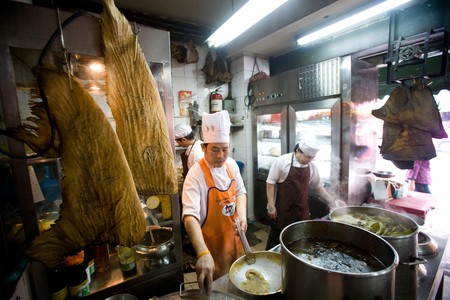 A speciality in some Thai-Chinese restaurants, shark fin soup is often considered a luxury and has a long history. Although the fins themselves are pretty tasteless, with the soup’s flavour coming from the broth, cooks use them to create the soup’s jelly-like texture. But overfishing of sharks is leading to some species becoming endangered. Environmentalists strongly discourage the consumption of shark fin soup. Artificial versions are available if you’re curious. 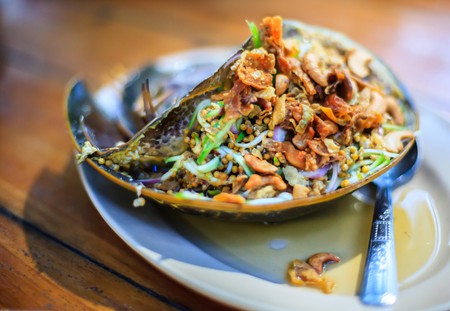 If the horseshoe crab eggs are served inside the shell, this dish may be toxic | © vichai phububphapan / Alamy Stock Photo

This salad uses the horseshoe crab, an ancient creature that is related to spiders and scorpions. The only edible part of the crab is its eggs (roe). Some salads mix just the eggs with strips of unripe mango and seasonings; this version is generally fine to eat and is said by many to be delicious. However, problems may arise when the salad contains the actual body of the crab, with the roe served inside the shell. Although there’s no flesh to eat, part of the horseshoe crab contains toxic substances, which can be lethal if the crab is not prepared properly and the toxin is ingested. Several years ago, many people fell seriously ill after consuming horseshoe crab in Thailand. Some even died. 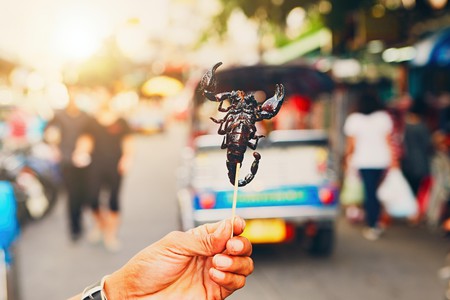 If you want to try a deep-fried scorpion, make sure the stinger is removed | © Jaromír Chalabala / Alamy Stock Photo

Among the exotic food in Thailand are its edible bugs and creepy crawlies. Deep-fried scorpions may be the most badge-of-honour-worthy snacks of them all. If you really can’t resist, do make sure the stinger has been removed before crunching down on it. The stinger, located in the tail, is filled with venom, which is highly dangerous if ingested. Although the vast majority of cooked scorpions are safe to eat, oversights can happen.

Like the rest of the world, deep-fried foods are abundant in Thailand, from lo bah (deep-fried pork organs popular in Phuket) to simple fishcakes. There’s little risk when tucking into deep-fried foods periodically; health risks come from long-term consumption. In addition to concerns around fat and cholesterol, the cooking oil is often reused many times by vendors to help keep costs down, which goes for many parts of the world. The chemical composition and structure of oil changes as it’s heated and cooled, with reused oil containing triglyceride. This substance is not only an unhealthy type of fat, but it may also cause cancer if eaten long-term. If you’re in Thailand for several months, mix and match your deep-fried goodies with grilled meats, stir-fried dishes, soups and salads. 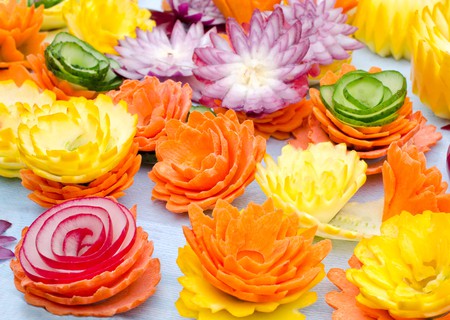 These fruits and vegetables are beautiful, but you don’t want to eat them | © Alena Silkova / Alamy Stock Photo

You’ll likely notice many beautifully carved fruits and vegetables in Thailand, with some ending up on the side of your plate. These may look pretty, but they often go through a lot of handling to get those fine details. Plus, they’re sometimes reused, going from plate to plate. A fair number of people get sick after eating ornamental fruit and veg; stick to taking pictures for Instagram and leave it on the plate.

Lao khao is the name given to a Thai liquor distilled from rice. Potent and strong, lao khao often burns your throat when you drink it and leaves a bitter aftertaste. Although illegal, there are many moonshine distilleries around the country, with lao khao readily available to buy in various recycled bottles. Those semi-hidden bottles of Hong Thong, M150 and Est may not contain what you think they do. The problems with home-made lao khao stem from the metal stills used in the distilling process. A reaction with tin and aluminium can produce a form of methanol, and consuming a lot of methanol can lead to blindness and death.

Compared with raw meat salads, methanol-laced moonshine and toxic creatures, tap water seems pretty harmless. Nonetheless, you should avoid drinking tap water in Thailand. Although the local authorities in Bangkok say it’s drinkable, the same cannot be said for other parts of the country. While it may be safe to drink at the source, after it has travelled through pipes and a system that is often poorly maintained, it can reach your tap filled with microbes and other nasties that can make you ill. Stick to bottled water or, to be more environmentally friendly, refill bottles at filtration machines that are widely available on the streets. 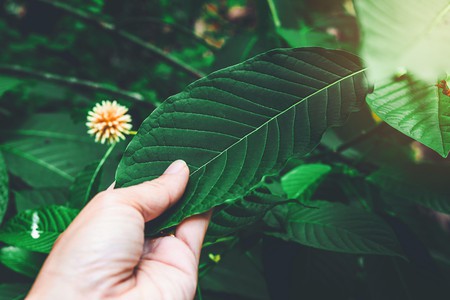 The kratom tree grows in the forests in Southern Thailand. The leaves have a long history of being used as a stimulant, either by chewing them to a pulp or using them to make tea. They’re cheap and easy to prepare and especially popular with people in the southern rural areas. However, the drug is illegal, and messing with illicit substances in Thailand is never a clever idea.