11 Most Underrated Islands in Thailand 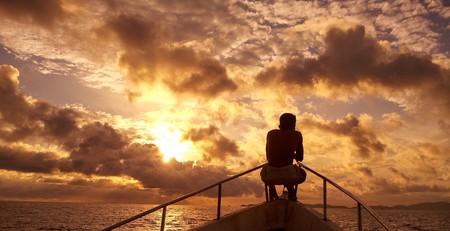 Koh Phangan, Koh Tao, Phuket, Koh Phi Phi – these are all Thai islands ubiquitous to every traveler’s itinerary through the Land of Smiles. This trend is not without fair reason, either. Thailand’s South is world-famous for its natural beauty, low prices, and bucket list-worthy attractions. Among the staples, however, which slices of paradise often go overlooked?

This mangrove-woven gem sits just alongside the Burmese border in the Andaman Sea. While just a 45-minute speedboat ride from the jungle-dense center of Ranong, don’t let its close proximity to the mainland fool you – the paradise is noticeably free of cars, 7-Elevens and other chain stores known to carve up beachfronts. While more resorts are accommodating to traveler requests of luxuries like air conditioning, WiFi, and 24-hour electricity, the vast majority of beachside bungalows retain their humble, yet tranquil charm. CNN notably compared the island to “Koh Samui in the ‘70s,” and the simplicity is evident. Note that the island is largely shut down during its monsoon season, so plan your visit accordingly, and be sure to cash up before you go. There are no ATMs on the island and credit cards are as good as a hunk of plastic. But once you’re there, prepare to switch off entirely. 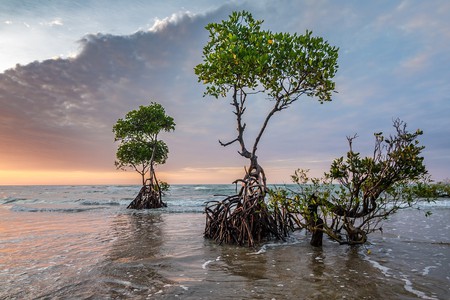 The forgotten little sister to nearby Koh Chang, Koh Mak is truly un-trodden territory – and it plans to stay that way. Nearly the entire island is privately owned by five families who carefully manage its development, and ensure its businesses remain exclusively local. This policy extends to national banks as well, so you won’t find any ATMs here. It strives to be fully self-sustainable, its focus on ecotourism and low-carbon philosophy evident in the extensive biking trails across the mostly flat terrain. Far from Pattaya’s party scene, Koh Mak attracts a more active crowd that takes advantage of windsurfing off its pristine beaches, snorkeling through the clear reefs, and kayaking to neighboring, uninhabited islands. 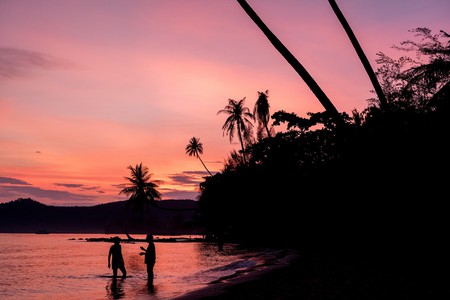 Ranking in at the fifth largest island in Thailand, Koh Kood – Thailand’s easternmost island before Cambodia – boasts a population of only about 2,500, most of whom live in small fishing communities around four main built-up areas. While people come for the tranquility, they stay for the beaches. Given its low population density for its size, much of the island is still undeveloped and uninhabited, giving intrepid visitors a wealth of opportunity to explore hidden bays, waterfalls, estuaries, and of course, often entirely deserted beaches. 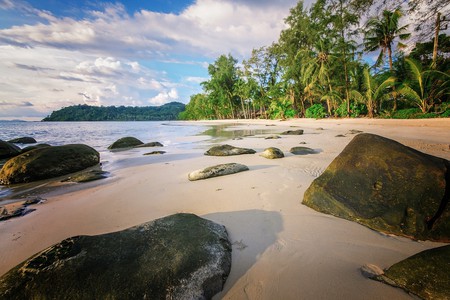 While Maya Bay off Koh Phi Phi draws hoards of visitors daily to experience The Beach, Koh Yao’s Phang Nga Bay gives visitors a chance to channel Mr. Bond himself as the site for scenes of the 1974 The Man with the Golden Gun. Sandwiched between tourist-heavy Phuket and Krabi lies the twin islands of Koh Yao Noi and Koh Yao Yai. Boasting the impressive cliffs and peaks characteristic to the limestone-cut islands of the Andaman, the island attracts travelers weary of the beaten path. The local community, mostly of Moken, or Sea Gypsy descent, has steadfastly retained their culture and way of life, unspoiled by the aggressive change that often accompanies tourism. But that doesn’t mean you’ve got to rough it. Each island offers excellent, high-end accommodation options popular among honeymooners and travelers after a bit more luxury – with a view. 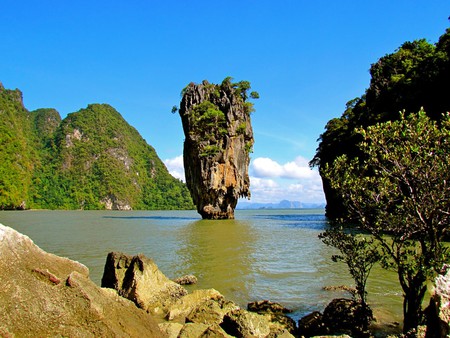 Far removed from the industrial haze of Bangkok, Koh Bulon stands apart as a model for sustainable tourism in the region. A stone’s throw from nearby Koh Taratao and Koh Adang, whose mountainscapes are visible to the South, this speck just North of the Strait of Malacca is enclosed by barely five kilometers of coastal caves, jungles, and white sand beaches. It’s so small you can easily walk from one side to the other in 20 minutes. The local Moken, or “Chao Lay,” get their energy from solar panels, and a waste-free way of life reigns supreme, which means frequent power cuts and limited WiFi for tourists. Like many other Southwestern destinations, the island is highly seasonal and only open during its dry months from November to April. 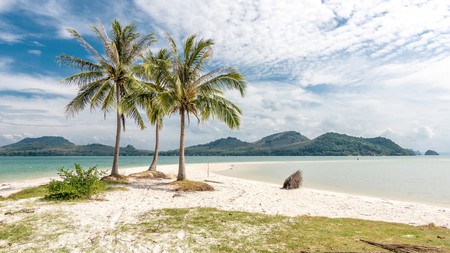 Also in Trang province, Koh Libong is the largest island in the region at 40 square kilometers, populated with Muslim fishing villages, a unique feature to the overwhelmingly Buddhist kingdom. The island’s eastern mangroves are part of the protected Libong Archipelago Wildlife Reserve, home to one of the last natural habitats of the endangered dugong – a sea mammal relative of the manatee. Trained naturalists lead tours for visitors eager to spot the chubby “sea cow,” to ensure responsible engagement and environmental conservation. Back on shore, the distinctive terrain of Libong boasts cashew trees and grassy meadows, among fruit orchards and stilted houses. 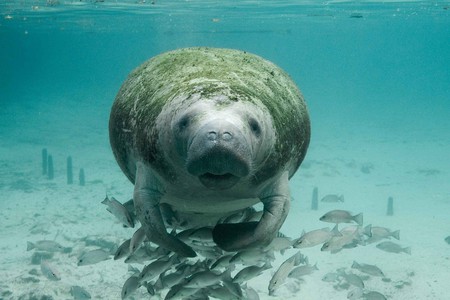 For those truly seeking to go off-grid, this remote island national park is the pinnacle of exclusivity – only 50 people can stay there at a time. But don’t equate its remoteness with luxury. There are no bungalows or resorts, but all visitors stay in a camp open just five months a year during the island’s dry months. Far from your dad’s botched nylon shelter, however, these sea-facing tents are right on the beach, mere meters away from the warm, crystalline waters of the Andaman. Spacious and comfortable, the two-room tents have electricity run by generators, so fans can keep you cool when the sea breeze fails. Laoliang is otherwise famous among the rock climbing community, and one look at the island’s splintering, soaring cliff faces will demonstrate exactly why. 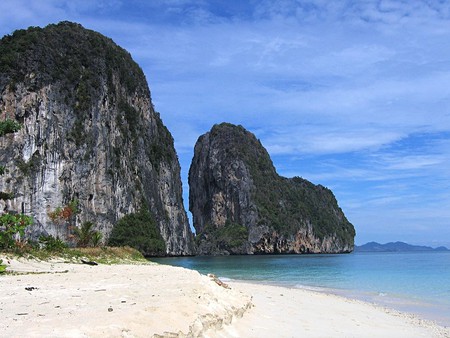 Just a few kilometers off the coast of Pattaya, this deserted island makes a unique day trip for nature lovers looking to escape the chaos of Bangkok but want to avoid the hoards of teenagers that flock to party in Koh Samet. Its geography, characterized by rocky cliffs and thick jungle, has kept it completely undeveloped and uninhabited. So while you can’t stay overnight on the island, it’s worth the trip to experience the unspoiled beauty, guarded by law under a marine protection zone. Charters run regularly to the island except during sea turtle mating periods, when visiting is prohibited to help preserve the endangered species. The Thai government also promotes active conservation projects in the area, aimed to conserve the reefs and of course, its turtles. 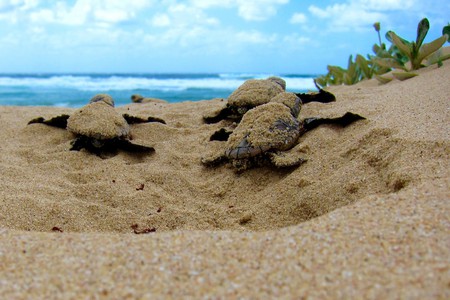 The closest island to the Surin Archipelago, Koh Phra Thong, or “Golden Buddha Island,” is a jump-off point for many to explore the Mu Ko Surin National Park. A marine protected area encompassing over 140 square kilometers of open water, the park is home to world-renowned scuba diving site Richelieu Rock, first discovered by famed explorer and conservationist Jacques Cousteau. The coral-rich waters are popular among visitors hoping for an encounter with a whale shark or manta ray, animals revered by the local Moken people, who are a traditional animist culture. Humble yet charming resorts, bungalows, and huts offer accommodation to those who prefer to stay land-bound, or divers can hop on one of the live-aboard boats departing from the island, or its nearby mainland hub, Khao Lak. 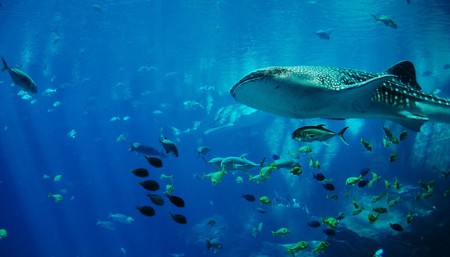 Just a short hop from diving paradise Koh Tao lies Koh Nang Yuan, the only landmass in the world that features three distinct islands connected by spits of sand. The incredible beachfront is popular among day-trippers, but the dock closes at 5 ‘o clock sharp, at which point guests of the island’s only resort have the paradise entirely to themselves. Its topography also means you can see both sunrise and sunset from the island, either from the beach itself or from its lofty viewpoint. The island also aims to be as sustainable as possible, and so no outside plastic is allowed, and glass or other easily recycled packaging is used wherever possible. It’s so enticing, in fact, the Red Hot Chili Peppers once rented out the entire island, where they began to write the hit album Californication. 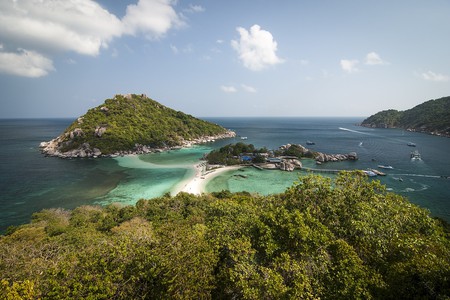 Nicknamed “Surfboard Island” due to its elongated shape, this part-national park part-resort island is barely three kilometers long and at some places just several hundred meters wide. Featuring just two main beaches, the island is protected within Hat Chaoi Mai National Park, and is truly one of the most secluded places in Southeast Asia. There are just a few local resorts that make up the island’s tourist economy, making it a great centre to go island hopping and explore the nearby islets like Koh Waen, Koh Chuek, or Koh Muk for its incredible Emerald Cave. A local tradition embraces the island’s underwater beauty by hosting underwater wedding ceremonies each February, usually around Valentine’s Day.