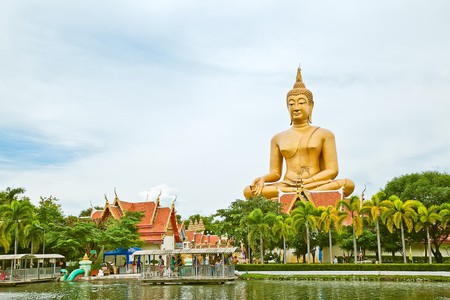 A province in Central Thailand, Singburi doesn’t often make it onto many travellers’ itineraries. Spend a few days here, though, and you’ll find a different side of Thailand that can be difficult to glimpse in more touristy areas. Here’s why you should plan a trip to the Lion City of Singburi.

It might not have any of Thailand’s headline temples, like Bangkok’s Temple of the Emerald Buddha or Chiang Rai’s White Temple, but Singburi has numerous working temples where you can see spiritual traditions far from the crowds. Visit any of the province’s temples, and you’ll likely find that you’re the only foreign face around. In some, you may even find that you’re the only visitor! The province’s history, deep-rooted Buddhist values, and abundance of temples have led to the province being nicknamed the “Spiritual Heartland” of Thailand.

A popular local temple is Wat Phra Non Chakkrasi Worawihan (often referred to as Wat Phra Non Jaksi, or simply Wat Phra Non). A bustling temple, many Thai people come here to make merit and seek blessings. Monks chant in Pali, the language of Theravada Buddhism, and there are many small statues in addition to the main reclining Buddha. The serene and beautiful Wat Phikun Thong features a large, seated Buddha statue, a pond where you can feed the fish, a large shrine to the Hindu deity of Ganesha, and more. Other interesting temples in Singburi include Wat Champa Thong with its royal boat, Wat Prachotikaram, Wat Amphawan, and Wat Kudi Thong. 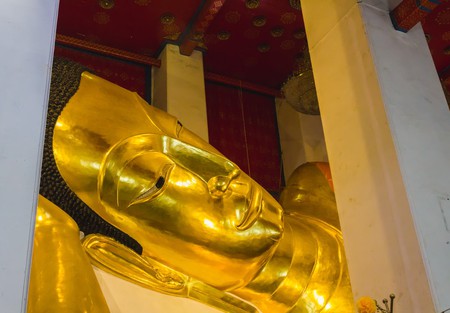 There are interesting historic sites

Singburi has several fascinating sites that are sure to please any history lover. The Mae Nam Noi Kilns, for example, were once part of the largest pottery-making sites in Siam. Remains of ceramics made here have been found in far-flung places, showing the site’s former importance. The kiln started operating around the 1400s, and the site is thought to have stopped operations around the end of the 17th century. In its heyday, there were some 200 individual kilns scattered along the banks of the Mae Nam Noi river. Today’s visitors can see the preserved ruins of several kilns, as well as remnants of pottery. It’s an interesting look into the past.

The old temple of Wat Sai has succumbed to nature, with large tree branches hugging the bricks and snaking around the walls. The now roofless temple houses a golden Buddha image. Colourful prayer flags hang above. The riverside setting is scenic, and the small temple is atmospheric and photogenic. Ruins from the Ayutthaya period can be found at Wat Phra Prang, Wat Na Phrathat, and Wat Kradangnga Buppharam, and Inburi National Museum houses historic objects found around the province. 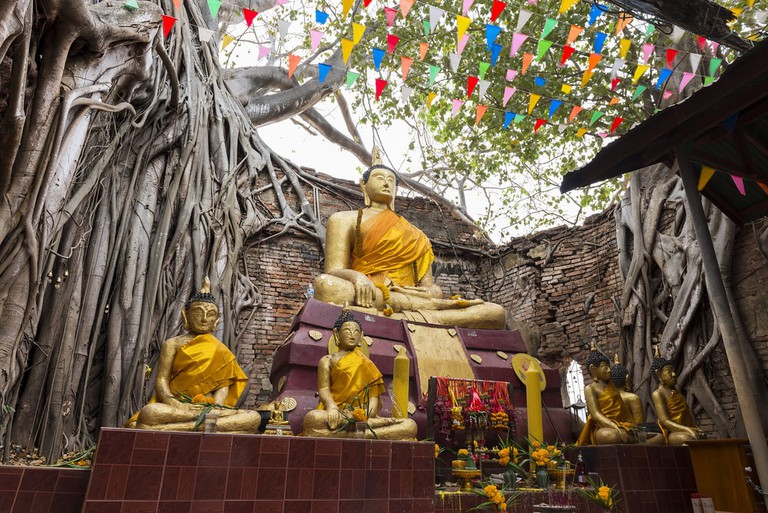 There are several unusual and unique attractions

As well as temples, countryside, and monuments, Singburi has several attractions that are fairly unique. You can learn more about the importance of the Thai buffalo at Kwai Thai Khao Ngam Conservation Center, an educational centre and sanctuary for unwanted buffaloes. Pick your own juicy rose apples at the lush Thong Sam See Orchard. Gaze up at a gigantic bottle sculpture, made entirely from old glass bottles, or taste things like fried bugs and grilled frogs, at the Saturday evening market, and see European-like architecture at the City Hall.

It would be easy to pass Wat Sawang Arom off as another run-of-the-mill Thai temple with nothing unique for visitors to enjoy. Find the building dedicated to the ancient art of shadow puppetry, however, and you’ll have a pleasant surprise. Known in Thai as nang yai, the large puppets are traditionally made from buffalo skins. Intricately cut, the shadow puppets depict figures from Thai folklore and history. The Nang Yai Museum at Wat Sawang Arom houses more than 300 of these historic puppets, as well as the traditional masks used in performances and a collection of musical instruments. Tucked away, the off-the-beaten-track museum is one of the biggest collections of shadow puppets in Thailand and it is a wonderful addition to any Singburi trip. 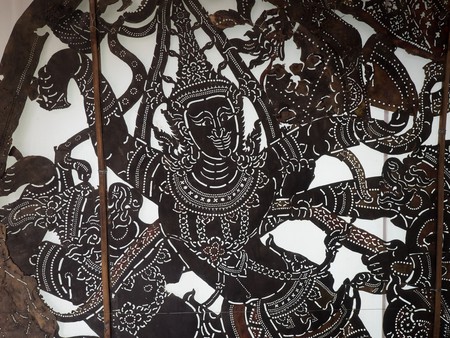 It is a land of heroes

Singburi is especially proud of the Bang Rachan Heroes, a brave group of men who fearlessly protected their village and held off Burmese invaders for eight attacks over five days while waiting for help from the ancient capital of Ayutthaya. Help didn’t arrive, and the village fell. Many people were killed. The local heroes will forever be remembered in Singburi, however, for showing tenacity in the face of adversity and sheer determination to fight against all odds. The fact that the Burmese needed to try so hard to capture the area is a testament to the heroes’ unwavering courage and desire to survive. The Monument of Bang Rachan Heroes remembers the band of villagers, and you can also see a replica of the fortified village, while learning more about past events in the museum. 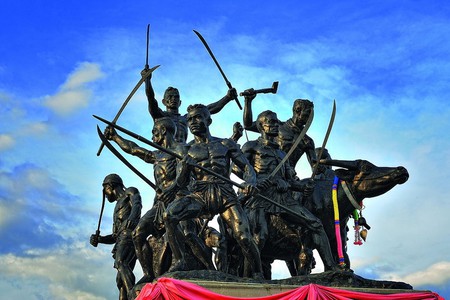 Singburi is a rural agricultural province, with rolling rice fields surrounding the main towns and villages. You don’t have to travel far in any direction to find yourself surrounded by verdant rice paddies, fields of sugar cane, and banana plantations. Buffalo graze in the fields and work the land, and you’ll likely spot long-eared Brahma cattle too. A drive through rustic villages often reveals chickens pecking at the sides of the road, geese used as guards for animals, and a look at local life that has long been forgotten in the country’s major cities and towns. Watch out for large monitor lizards swimming through the small waterways. Singburi is a place that really retains its traditional agricultural roots. 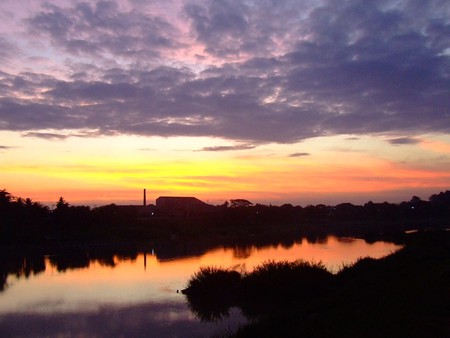 Sunrise over the countryside in Singburi, Thailand | © Keng Susumpow/Flickr

Locals are friendly and happy

Polls are conducted each year to measure the general happiness levels of Thai locals around the country. For two consecutive years, Singburi was named as the happiest province in Thailand! Even in years where other provinces come out on top, Singburi is never far behind, often ranking within the top five happiest places for people to live in Thailand. In a country known as the Land of Smiles, Singburi’s people are especially warm and welcoming. In general, locals see enough foreigners to not be intimidated by outsiders, yet not enough to have become jaded by tourists, as can be the case in the more-visited areas.

Singburi is famous for its fish. The pla chon Mae La is especially renowned, with a soft and rather crumbly texture and a fresh taste. Sourced from the Mae La river, there are plenty of restaurants that serve this local speciality, particularly around the Mae La area of Bang Rachan district. Many fish statues can be found around the town, paying homage to the local fish, and there is even a yearly fish festival, held each December. Other local dishes from Singburi include kun chiang sausage and khanom pia, a type of Chinese cake. 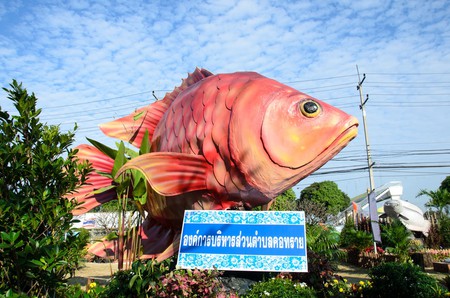 The annual boat races are lots of fun

Along with several other provinces, Singburi hosts long-boat races each year. Usually held in October or November, determined teams compete in energetic races along the river. The atmosphere is electric, with hundreds and hundreds of people turning out to cheer for the rowers. Boats are decked with colourful ribbons, many food vendors set up alongside the river, and there are plenty of fairground-type competitions and games to create a carnival-like feeling. 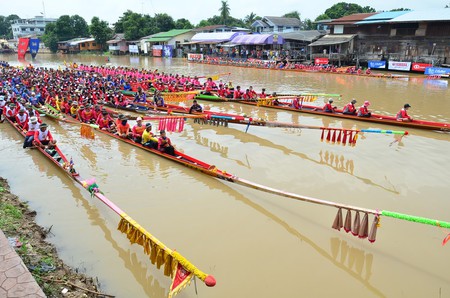 There are diverse leisure options

There are plenty of ways to enjoy downtime in Singburi. It might not have the huge shopping malls and multi-screen cinemas of larger cities, but it does offer a variety of ways to relax in a more low-key manner. Spend days fishing in one of the rivers or canals, and visit Mae La Maharachanuson Park. There are two lovely public swimming pools in town, as well as a pool at the stadium. The stadium also has running tracks and other sports facilities that can be enjoyed for a small fee. Free-to-use gym equipment can be found in various places around the town. There’s a small Muay Thai gym too, and you’ll find several massage parlours to ease any aches and pains. The snooker hall is a great place to take it easy, and a stroll along the river offers scenic views. In the evenings, you’ll see many locals jogging and walking here.

Nightlife is low key and chilled out

Singburi’s nightlife offers a great way to mingle with locals and have fun away from the tourist crowds. There are several bars offering different vibes, most of which feature live bands. There’s a typical Thai nightclub that’s open until late if loud music and raucous revelry is more up your street. While the karaoke bars often don’t have a huge selection of English songs, they are still well worth a visit for the jovial atmosphere. Alternatively, head to one of the restaurants, fill the table with an assortment of dishes, and spend the evening sharing a meal with friends. 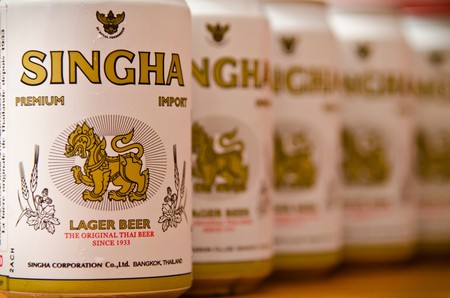 Easy to reach from Bangkok, there’s no reason to skip visiting Singburi on your next trip to Central Thailand.