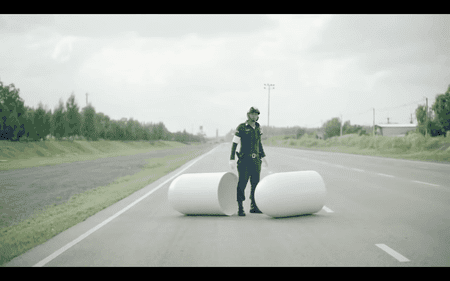 The Western philosophy towards advertising celebrates quick, concise messaging, often to the point of minimalism. Consider the successes of simplistic campaigns like Nike’s “Just Do It” motto, or the iconic McDonald’s arches.

Meanwhile in Thailand, the burgeoning advertising industry has evolved into an entertainment genre in its own right. Long-form, complex, sometimes controversial, and often downright confusing, Thai ads specialize in keeping the viewer constantly guessing as to what product is actually being marketed. They’re so popular, in fact, that many companies produce special extended-length versions they release, often eliciting viral response.

This advertisement operates like a giant inside joke for Thais. The video opens explaining that unofficial Thai checkpoints are commonplace in Thailand, and that the frequently fussy, intrusive, and brusque behavior of officers is a running joke. A police officer crawls out of a giant pill in the middle of the road and begins pulling drivers over who are heading to places called “thigh” or “belly.” The officer cites infractions like having oily skin or carrying fatty foods. Inexplicably, the officer reveals he is from the “mouth” of Woonsen, a Thai celebrity, who according to this comment, is setting the rules. Turns out, the fourth wall gets broken, and the whole charade is meant to advertise a dietary supplement. This ad won an award at the 2017 Cannes Lions International Festival of Creativity.

Diet products are extremely popular in Thailand, and the messaging for these products’ advertisements is anything but subtle. Clocking in on the lower end of the spectrum at just 30 seconds, this spot from Oishi introduces us to two women at a public bathroom sink. One of the women giggles smugly, while the other pokes and prods at her belly. Suddenly, channeling the world’s strangest superpower, this woman literally pushes the fat in her gut into her breasts. How this spot actually connects to the product is, like many Thai advertisements, open to interpretation.

You don’t even need the English subtitles to catch the drift of this Thai advertisement. This five-minute spot (complete with a copier-time-machine-jump) follows the plight of two single office workers both infatuated with the handsome company jerk. Each agree that if they change the way they look, they will find a handsome man and finally be happy. Instead of featuring some underlying positive message, however, that is exactly the direction that this advertisement takes. The two girls binge on slimming (laxative) instant coffee sachets, become beautiful, fawned after, and ultimately, happy. This ad generated a lot of controversy for its blunt fat-shaming elements.

This storyline isn’t too bizarre; it’s actually relatable, but it merits a spot on our list because of its exaggerated drama and 15-minute (!) timeline. Visa expertly pulls together a quintessentially 2017 recipe for getting through a bad breakup: solo travel, hashtags, gentle degrees of online stalking, and of course, a healthy dash of capitalism. As we follow the heroine’s journey through Tokyo, Visa pulls at our heartstrings while giving perfectly placed jabs at our smartphone-driven lives: “Good job, Google maps,” she mutters, after realizing the app got her completely lost. But the story weaves in the beautiful aspects of travel as well: kind strangers, new experiences, communication barriers, impulsiveness, Instagram, and obviously, that Visa is always by our side to handle the unexpected.

For better or for worse, the selfie phenomenon is here to stay, and the latest updates to smartphones, complete with multiple selfie settings, proves just that. But Huawei brings us this hilarious compilation, begging the following question: Is there ever a bad time to take a selfie? See for yourself.

Like the best Thai advertisements, Peppermint Field carries you so far away in its storyline that by the final product reveal, you’ve forgotten you’re watching a commercial altogether. Opening like a dark dystopian drama, complete with a complementary Stephen Hawking quote, this four-minute spot takes us on the world’s worst anniversary date. Our simpleton protagonist perpetually puts his foot in his mouth, steadily angering his wife into the literal depths of hell. However, as is standard in the Thai advertising universe, an arbitrary product soon comes in to save the day.

Whitening products are all the rage in Asia. Found in everything from lotions to makeup, the products promise lightening effects to the user’s skin. This Thai advertisement may have taken the trend too far, however. The company actually recalled the video and issued a formal apology for its use of digitally altered black skin, taglines such as “white is winning,” and the general message that the beautiful model will lose her career and her white skin if she stops taking care of herself.

Another gem brought to us from Nature Gift, again featuring a woman obsessing over her weight, this advertisement takes a more inspirational turn (in a way). A young girl, in love with a Thai pop star, is crying over her appearance. As events unfold, the girl realizes that the pop star is gay, as are many of the men she finds attractive, and this inspires her to make healthier life choices just for herself: eating healthy, exercising, and of course, drinking Nature Gift coffee.

Many Thai commercials are known for developing insane storylines and using drama to sell everyday items. Every now and then, however, Thai TV illustrates products that are completely ridiculous or offensive. This banned commercial markets “security pants,” which claim to ward off unwanted male attention by enabling women to hide in plain sight as cross-dressers. The pants give the wearer the illusion of being male through a subtle bulge seen through very tight pants. There’s even testimony from a man who admits the pants prevented him from harassing a girl.

This Thai lip balm brand plays on the emerging popularity of Yaoi — a Japanese genre focusing on romance between male characters. Starting out like many Thai dramas, a high school boy confronts another for “toying” with his younger sister. The short commercial takes a twist when the boy reveals his feelings are for the brother, not the sister. He urges the boy to take better care of his rough lips, and to use the balm regularly so that “you know how my lips feel,” before the camera pans to a group of very excited Thai schoolgirls.