The Pamiri House: At Home on the Roof of the World 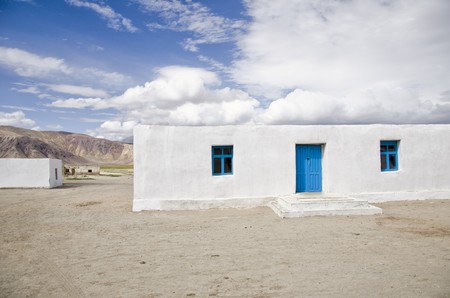 Tajikistan’s Murghab Plateau is cold and desolate, but for thousands of years the proud, hardy Pamiri people have herded their flocks across the Pamir Mountains and have made their home on the “Roof of the World”. Their language, history and culture is drawn from the ancient Persians, the Graeco-Bactrian soldiers of Alexander the Great, and Arab conquerors. Turkic nomads and Soviet bureaucrats have left their marks, too. Nowhere is their complex cultural identity more explicit than inside their homes.

Stepping across the threshold of a Pamiri home, invariably guarded by the horns of a Marco Polo sheep, you enter into a world intricate with symbolism. The elements are always the same, but what they mean depends on whether your reference points are the Qu’ran and the life of the Prophet Muhammad, or the far older cosmology of Zoroastrianism, the world’s first monotheistic faith.

Pamiri houses typically have just one main room, but it is divided into three distinct areas. The floor and the hearth represent the earth and inanimate world. There are then two raised areas for sleeping and eating, one each for the vegetative and cognitive souls.

The roof of the house is flat, but light comes in through a skylight surrounded by four concentric wooden squares. The top square—the one first touched by the rays of the sun—represents fire. The other three squares symbolise the remaining Zoroastrian elements: earth, water, and air. 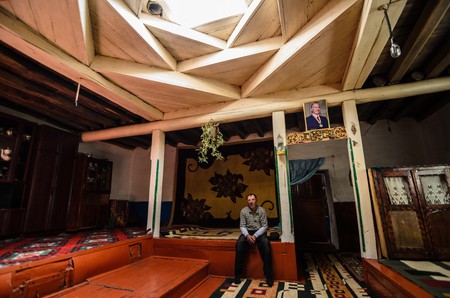 Skylight in a Pamiri House | © Alovaddin Kalonov/Courtesy of Paramount Journey

Five wooden pillars hold up the roof. There are the five pillars of Islam (faith, prayer, charity, fasting, and Hajj), but also the five main family members of the Prophet Muhammad. The Muhammad pillar by the entrance was traditionally made of sacred juniper wood, and a child’s cradle is placed here to protect the baby inside. During a wedding, the bride and groom will sit by the Ali pillar, as it is also associated with Mehr, the Zoroastrian angel of love. The pillar of Fatima, the daughter of Muhammad, is the one closest to the stove, and the twin pillars of Hassan and Hussein are joined to show their closeness. If a religious leader visits, he should sit by the Hassan pillar, which is also a spot for private prayer. 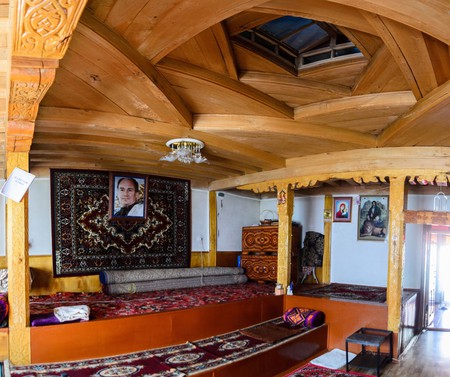 The size of the house dictates the number of beams required to support the roof, but you can’t just pick any number. The two main transversal beams represent the material and spiritual worlds, or the concepts of universal reason and the universal soul. If there are six smaller beams, then they stand for the six directions (north, south, east, west, upper, and lower) or the six prophets revered in Islam, but seven beams would be the seven heavenly bodies, the first seven Imams, or the seven holy immortals.

The exterior of the house is invariably painted white, making it stand out from the dusty grey-brown of the mountains. White is for light, for purity, and the milk of the mother, which gave life to everyone in the home. The dominant colour of carpets, embroideries, and other decorations inside the house is red, because red is the colour of the sun, fire and flames, and blood. 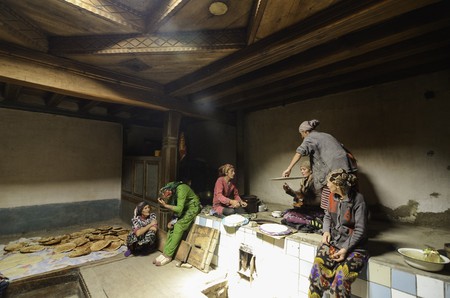 The Pamirs are still remote and inaccessible: you need a local guide such as Alovaddin Kalonov of Paramount Journey, who spends his life in the mountains, helping adventure-seekers discover Pamiri culture by jeep, mountain bike, and on foot. Nothing beats a homestay in a Pamiri house, experiencing the warmth of their hospitality firsthand.